The times they are a-changin’

In Interstellar, a futuristic movie, Cooper the farmer tends to driverless automated farming machines that sow, fertilize and harvest crop – all guided by GPS, sensors and drones. Take a look at videos of John Deere’s machines below. Could that future already be happening?

Technology’s role in precision agriculture is becoming more significant by the day. One company leading this wave of digitizing and connecting information from the farm to the table is John Deere, a 180-year-old company known the world over for durable tractors. The company has been a leader in hardware innovation; its first product was a polished steel plow that outperformed tools of the time (see picture). However, more recently Deere’s R&D efforts have focused on software and service offerings. “Our customers continue to expect the best equipment but increasingly they want us to provide solutions (to increase productivity and operational efficiency,” says Klaus Hoehn, Deere’s VP of advanced technology and engineering. Deere has grown its analytics team so much that it predicts it will have more software engineers than mechanical engineers in the next five years.[1] 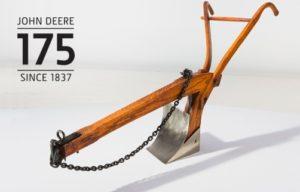 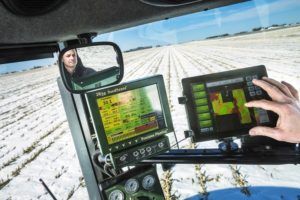 Precision farming has a twofold role of (1) sensing inputs and (2) processing and acting on information to the extent that the farmer is comfortable to cede to a machine. The wave of digitization began in 2001 when Deere started fitting GPS sensors on their machines enabling farm managers to pinpoint location to the accuracy of a couple centimeters. This made it possible to stop machines from covering the same ground twice or missing out patches as they rolled up and down the fields, thereby reducing fuel bills (up to 40%) and improving the efficacy of chemical application.

Deere’s machines can plant individual seeds to within an accuracy of 3cm. This precision permits variable-rate seeding, meaning the density of plants grown and depth at which seeds are sown can be tailored to optimize growth conditions. Control is as simple as a touch on the iPad[2] connected via wireless technology to the machines.

Since then, more machine capabilities have been added. High-density soil sampling provide information on plot fertility and accurate contour mapping indicate how water moves around the plots. Additional detectors planted in the soil help monitor moisture levels at multiple depths and some indicate soil nutrient content and how it changes in response to the application of fertilizer.

But the real tipping point happens when the crops are harvested. The rate at which grains flow into the harvester’s tank can be measured real time. Combining this with GPS data creates a yield map (see diagram) that shows which bits of land, and the micro-environmental factors and crop treatment had been most productive. This information can be gleaned and fed into the following season’s planting pattern[3]. 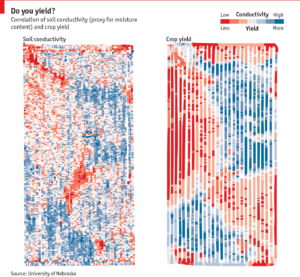 Data received and generated by these farming machines are beamed via cellular network to the John Deere cloud and can be analyzed on the company’s cloud-based software called Operations Center or shared with other farmers, consultants or customers. Information collection also extends to the Deere machines themselves. Deere’s fleet management partnership with Verizon aims to build on machines’ connectivity to monitor and notify farmers when new parts are needed and how efficiently the machines were used[4]. Farmers can then order new parts via JDLink or contact dealers for questions.

Despite AgTech’s promise to enhance agricultural productivity and become the solution to global food shortage, at least two major hurdles prevent widespread adoption. Price is still prohibitive for small farms and especially developing country farmers, where there is more room and need for yield improvement[5].

The other concerns ownership and use of vast amounts of farm data collected[6]. Farmers inherently worry their data may be used against them if shared with rivals, traders and product manufacturers. Already consolidation in the past 15 years, has granted Monsanto and DuPont a combined market share of 70% in the USA. Last year alone, farmers paid 166% of what it was in 2005 for corn seeds, estimates from Purdue University.

At this moment, Deere says it has no plans for farmers to hand over complete control to the cloud, because that is not what its customers want. Deere’s word may not be enough to convince wary farmers. If limited farmers adopt this technology, network effects render it less valuable for users and service providers. Given the relatively new space of precision farming, Deere’s foray into software and service brings it into unconventional competition with seed and chemical sellers[7]. The nature of the service also attracts new tech start-ups  who are not affiliated with seed, chemical or machinery producers (e.g. Farmers Business Network). Perhaps a new type of dominant player will emerge?

Quirky & Unique, a Peek into the Crowdsourcing Innovation Mob

AgEagle Takes Flight: A New Way of Helping Farmers Scope out the Field