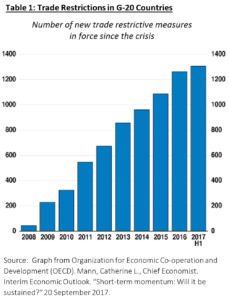 “Localization is another important tenet of our value chain. Localization lowers risks by increasing the flexibility of our supply chain to respond to disruptions caused by natural, political or other causes…”

During President Trump’s Asia tour last week, eleven countries announced a preliminary renegotiation of the Trans-Pacific Partnership (TPP) trade agreement. While the US was the leading architect of the original deal, President Trump concluded that the US would not be party to the renegotiated contract. The US is not alone in its isolationist policy choices. Protectionist politics across the globe have resulted in a sustained backlash against free trade. As shown in Table 1, global trade restrictions have been mounting for the past decade. The impact on trade volume has been staggering: 2011 was the last year in a consecutive, 30-year trend of trade growing at twice the rate of global GDP.[2]

General Motors (GM), has every reason to be concerned. GM’s multi-national supply chain encompasses manufacturing, distribution, and warehousing operations in 61 countries, with major assembly hubs spattered across 17 countries and six continents (see supply chain for GM’s Buick Envision SUV in Figure 1).[3] However, escalating isolationist trade policies threaten to make GM’s multi-national strategy untenable through costly import tariffs that would obstruct GM’s global flow of goods.[4] To manage this risk, GM is winding down its operations in less profitable geographies in the near-term, and deploying the additional resources that it derives from each exit into localized supply chains that depend less on the multi-national movement of goods over the long-term. In 2015, GM ended manufacturing in Australia and exited Russia. This year, GM sold off its European[5] and South African operations.[6] 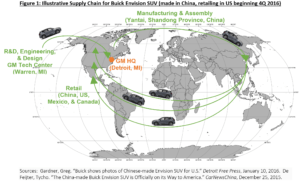 GM has since announced plans to open a 1.2 million square-foot supplier park near its manufacturing facility in Texas in 2018. The park will relocate 600 jobs previously performed outside the US, and employ an additional 650 people.[7] Notably, Table 2 reveals that GM has been expanding in the US over the past seven years, likely in response to trade pressures given that the company’s US sales comprise only 30% of its total sales volume, with the vast majority of sales occurring outside of the US.[8]

Last month, GM purchased Strobe, a California-based company that develops laser-imaging technology for driverless cars.[9] This acquisition complements GM’s purchase of California startup Cruise Automation, a driverless car developer. GM has been able to integrate autonomous features into its Chevrolet Bolt electric sedan, which is manufactured in Michigan.[10] A vertically integrated, localized supply chain for a product like this reduces the risk of import tariffs and allows GM to increase its speed of execution and delivery to market, albeit at an increased cost of production. 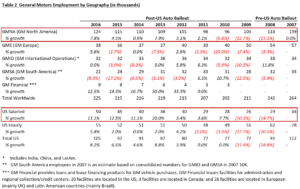 As GM works to ensure that its operations in any given country are independent of the company’s operations elsewhere around the globe, GM should manage several key risks. In a world where GM’s operations are geographically constrained, it becomes increasingly vulnerable to supplier risk. GM should therefore diversify its supplier base in each country. In addition, GM should invest in talent. Skilled labor will be critical to GM as it expands its US workforce. The US shed millions of manufacturing jobs over the last half-century, and with them workers who could have been uptrained to operate equipment that has become more automated and reliant on new technologies.

As we watch GM grapple with these changes, the impact of trade restrictions on labor, the most basic component of a supply chain, begs for deeper consideration. The advantage of manufacturing internationally is starting to disappear even without the added cost of tariffs. In 2004, manufacturing in China was 15 percent cheaper than the US. In 2016, this disparity shrunk to one percent.[11] Does this suggest that we might not need isolationist policy to “re-shore” labor in the first place? Moreover, will re-shored supply chains be as good for jobs as isolationist regimes envision? CY TOP, an Asian company that produces stainless steel trashcans began developing plants in the US two years ago; however, the opportunity to reinvent its production process prompted the company to reduce its labor content by 88% through automation.[12] If the goal of isolationist trade policy is to spur job growth, then do we risk losing more than we gain? Are there other impacts on labor that multi-national companies need to mitigate if trade restrictions continue to mount?

[4] Historically, costly US tariffs have resulted in retaliatory tariffs imposed on the US by other countries. This has almost always hurt US industries, companies, and jobs. By way of example, when the US failed to comply with a NAFTA provision that permitted Mexican truckers on US roads in 2009, Mexico responded with duties of up to 25% on farm goods, resulting in $984 million of lost revenue for US farmers exporting to Mexico. Dollar figure captures lost revenue among US farmers while duties imposed by Mexico were in place from March 2009 through October 2011. Source: Zahniser, Steven, Tom Hertz and Monica Argoti, “Quantifying the Effects of Mexico’s Retaliatory Tariffs on Select US Agricultural Exports,” Applied Economic Perspectives and Policy, Volume 38, Issue 1 (2015): 103.

Similarly, when the US imposed antidumping duties on Chinese solar panels in 2012, China responded with duties against US silicon, which prompted Hemlock Semiconductor to abandon its planned construction of a $1.5 billion silicon plant in the US. Source: Reuters, “Here’s How Donald Trump’s Trade Policy Could Backfire,” March 24, 2016.

Banking across borders: Goldman Sachs in London – or Frankfurt?