The Peruvian anchovy fishery is the largest in the world, in terms of anchovy catches [1] and anchovy production [2]. The Peruvian fishing ground is very productive due to its location by two currents, the Humboldt current, and the Peru Coastal Current, which create coastal upwelling, a phenomenon that is ideal for anchovy populations [3].

Despite its privileged position, the Peruvian anchovy industry is extremely sensitive to ocean-climate variability, specifically to the El Niño phenomenon. Historically, the anchovy population has been inversely proportional to anomalies in the sea surface temperatures (SST, see figure 1). As SST increases materially under strong El Niño events, nutrients cannot rise to the surface and the plankton population consequently decreases, and the anchovy populations suffer as a result. [1] According to certain studies, strong El Niño events occur more frequently during periods of global warming, which has been witnessed in the last couple of decades. [4] 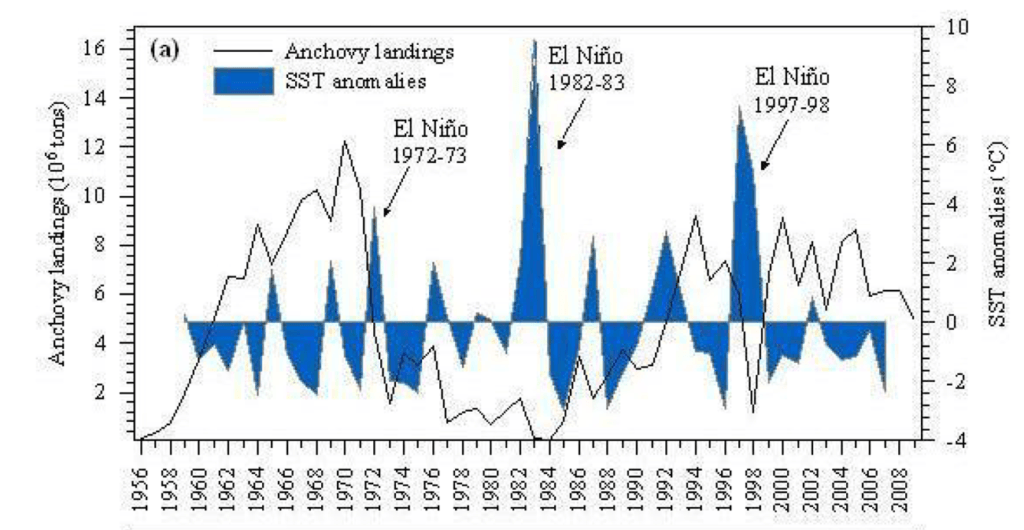 Historically, the situation has been worsened by overfishing practices in the sector as occurred in years of very strong El Niño events, causing the industry to crash to almost irrecoverable points in 1972 and 1998. [5] Consequently, the Peruvian government has focused on improving regulatory quotas to disallow overfishing. In 2008, a new regulatory framework was implemented to not only impose a total quota for two separate seasons, but also to set the allocation to individual companies. During years of strong El Niño events, the government may cancel the fishing season or set a lower quota in order to better protect the sustainability of the anchovy population. [6]

Exalmar is the third largest producer of fishmeal and fish oil in Peru (AR). It has a quota of 6.61% of the Central-North area and 4.46% of the South Area and caught between 77-98% of its quota in 2015 depending on the sector. [2] Additionally, the company is vertically integrated as it catches anchovies and then produces fishmeal and fish oil at its plants. This means that in a bad year, not only do they have lower sales and lower utilization of their shipping vessels, but the company also has lower utilization at the plant level, further magnifying the negative impact of global warming.

Despite being a relatively profitable company with margins above industry average [7], its ability to generate cash flow is impacted by weather volatility. Lower catch levels directly negatively impact the company’s EBITDA levels, consequently driving up leverage ratios to unsustainable levels. If expectations of continuously increasing sea surface temperature levels are accurate, then the company’s financial metrics are likely to continue to deteriorate. An example of overall market sentiment is exemplified in S&P’s recent downgrade of Exalmar to a B- rating with a negative outlook. [7] Given all of this, it is my view that the company will have to take action and shift focus to a more sustainable business model.

The company has taken some actions towards sustainability. This includes making changes to its plants to obtain the ISO 14001 to reduce the negative impact of its activities in the environment. Additionally, the company is performing simulations of hydrocarbon spillage in Chatas, optimally segregating in store solid waste management and properly managing effluents coming from fish pumping water. Furthermore, the company has also switched to natural gas as a new fuel for two of its plants, Tambo de Mora and Callao. Exalmar also participates in community events, such as beach clean ups and community talks. [8]

While all of these actions are respectable and environmentally friendly, I cannot help but wonder if they are enough. Are these actions sufficient in limiting further sea level temperature increases? If they are not, is there anything the company could actually do or is the fishing industry in Peru doomed?

Looking forward, I believe that the company should continue with its current environmental conscious practices; however, in order to be a sustainable company in the medium to long term, it has to consider changing its business model. One way would be to adapt its plants to be able to use them to process other types of products. This would help monetize the unused capacity of the plants despite some initial investment. Another way that the business model could be altered would be to use fishing farms, as is already done with shrimp in certain countries. If done properly, this could be a way to ensure a certain production level. In my opinion, the only way for the industry not to be doomed is to adapt, continue focusing on environmental practices and considering more sustainable ways to approach the problem rather than just following the government’s imposed quotas.

Student comments on Is the Peruvian Anchovy Industry doomed due to increasing sea surface temperatures?