Ah, the good old days of print media – when being the best meant having broad appeal and making your advertisers happy. Traditional print media, though, was one of the first to be disrupted by the digital space and still has the most to lose. Many publications, especially in the newspaper industry, haven’t shifted their culture quickly enough to meet the changing demand and harness the power of digitization. The New York Times Company (NYT) is one of many giants that have suffered from shifting their business too slowly.

In the physical world, NYT could simply provide its customers with quality reporting and monetize this value with subscriptions and advertising. NYT replicated this model when it moved its newspaper online, depending on its brand name to attract customers and advertisers. As a result, it was slow to adopt digital industry best practices. In a leaked 2014 report, the NYT had several strategic and operational issues, including: 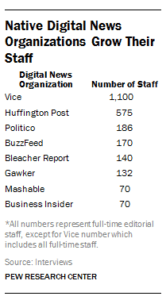 NYT also focused a lot of its core staff on the homepage layout. Even when adding videos to its site, they adopted practices traditional to TV shows rather than online video. Standing in stark contrast were players like The Huffington Post and BuzzFeed, who were able to grow editorial competencies after employing strategies of “digital first”. The Huffington Post capitalized on the rise of social media to build loyal readers. It used appealing headlines and strong opinions to increase sharing on social media and garner traffic. In fact, The Huffington Post has regularly aggregated and repackaged Times content and outperformed NYT in website traffic on that content. This is especially difficult to digest when you consider that NYT had six times the number of digital customers of The Huffington Post simply because of its brand. BuzzFeed, on the other hand, focused its efforts on using data to build virality from its earliest days. By combining data and social media, BuzzFeed has focused on compelling content and personalized discovery to grow its consumers. In short, instead of focusing on their home pages, BuzzFeed and The Huffington Post focused on organizing data to acquire a user via social media and then enhance click-thrus to other content on their sites. Additionally, both BuzzFeed and The Huffington Post created video content as short-form news or social videos, and again leveraged social media to promote sharing.

To its credit, NYT did invest in some digital transformation initiatives, including:

NYT still holds a competitive edge as a news site with quality reporting, a position that can’t be understated in a field where consumers value authenticity and neutrality. NYT remains at risk, however, as neutrality becomes less important to readers. One way to address this risk is by experimenting in the newsroom. While journalistic integrity remains critical to readers, NYT needs to find better ways to organize editorial staff so that even writers are intelligently balancing their coverage with reader demands. Furthermore, they need to better employ digital practices and partnerships to engage users on their content. As revenues from advertising continue to fall, NYT should pursue new methods of monetization. One place to invest may be their aging stories. If NYT can better tag archived content and create unique digital presentations, they may see increased demand for accessing or experiencing historical records. A model for revenue-sharing may be on the horizon, as NYT recently announced a partnership with Facebook Live. NYT should find additional revenue-sharing opportunities with other large tech companies that receive the lion’s share of advertising dollars. 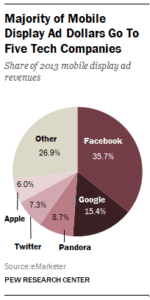 NYT’s investment in virtual reality is an intelligent step forward, as subscription growth might increase if they are a first mover in designing compelling news experiences for users. In the short term, though, they need to better leverage social media to distinguish themselves and enhance brand loyalty among millennials.

The New York Times has a long way to go to become a strong digital competitor. Thus far, it’s brand has helped it remain afloat but as competition grows and users continue to be inundated with content, the winners will be news sites that can generate new modes of user engagement and diversify their revenue sources.

Grossman, Rhys. “The Industries that Are Being Disrupted Most by Digital”. March 21, 2016. https://hbr.org/2016/03/the-industries-that-are-being-disrupted-the-most-by-digital

Holcomb, Jesse and Amy Mitchell. “The Revenue Picture for American Journalism and How it is Changing.” Pew Research Center. March 26, 2014. http://www.journalism.org/2014/03/26/the-revenue-picture-for-american-journalism-and-how-it-is-changing/

Benton, Joshua. “The Leaked New York Times Innovation Report is One of the Key Documents of this Media Age.” Nieman Lab. May 15, 2014. http://www.niemanlab.org/2014/05/the-leaked-new-york-times-innovation-report-is-one-of-the-key-documents-of-this-media-age/

The New Waze to Drive

Student comments on Is The New York Times on its way to becoming old news?