This is only a fraction of the countries that have been affected by major drought in the recent past. As populations and economies steadily grow, so does our demand of water supply. Particularly affected, will be the food and beverage businesses. Access to water is gradually becoming one of the greatest challenges of our time, and one that will affect these businesses the most because it is core to their products. Changes in temperature and rainfall patterns could lead to food price rises of between 3% and 84% by 20501 and increasing water shortages are among the biggest threats, not only to agriculture, but also to the soft drink and bottled-water market.

PepsiCo, one of the largest food and beverage companies in the world, is one such company that heavily relies on water and its agricultural supply chain – which also relies on water – to make their products. Their products are available around the world and their portfolio includes 22 brands that each generates more than $1 billion in estimated annual retail sales2 Unfortunately, due to its business model, it is not only one of the most vulnerable to climate change, and thus water shortage, but also one of the major contributors. However, in recent times, we have seen PepsiCo move its efforts from being a food and beverage manufacturer to an agricultural business that integrates its entire supply chain and provides technological and advisory support to it. One laudable initiative it has taken towards this is the Sustainable Farming Initiative in 2013. Today, the Sustainable Farming Initiative has expanded to growers across 15 countries, with active programs representing over 28,000 growers in its supply chain3

Some of the resulting efforts include using new potato varieties for snack products that use less water and deliver higher yields, advising farmers on the use of water-efficient irrigation methods such as drip irrigation and providing water measurement technology to enable growers to better plan when and how much water they might use to maximize yields. In 2015, PepsiCo India replenished over 12.7 billion liters back into water stressed areas because of these efforts.4

PepsiCo has seen a decrease of 25.8% of water use per unit production since 2006 – much more than their declared target of 20%.4 This is a result of their water stewardship program. 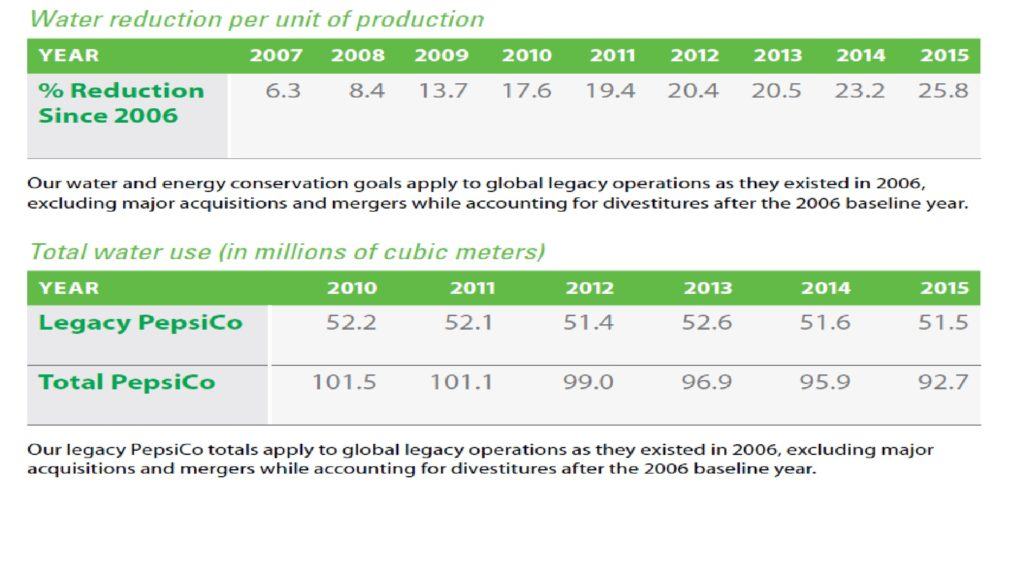 In 2009 alone, PepsiCo saved more than 12 billion liters of water through efficiency improvements within its operations5 In India, for example, it launched many innovative initiatives that result in a decrease of water consumption in manufacturing by more than 55%.6 In the US plant, one of the initiatives was to clean bottles using ionized air instead of water.6 PepsiCo’s Frito-Lay snacks facility in Arizona, treats and recycles about 648,000 gallons per day of process water from the potato chip and snack manufacturing process for rinsing and washing water and for landscape irrigation. In addition to generating energy from renewable sources, the facility recycles up to 75 percent of process water, enabling Frito-Lay to reduce its annual water use by 100 million gallons, and sends less than 1% of its waste to landfill.7

This was critical, as according to a 2014 review of their sites, they found that between 39 and 41 percent of their manufacturing facilities were located in water-stressed or water-scarce areas.5

Apart from benefitting the environment, PepsiCo’s water conservation efforts saved the company more than $80 million between 2011-2015.8 Additionally, through its charitable arm, the PepsiCo Foundation, the company has partnered nonprofit organizations around the globe to help provide safe water to 9 million people since 2006, exceeding its original goal of 6 million by the end of 2015.

This is great! But what next?

PepsiCo has set additional goals for 2025 in an effort to conserve water. Key goals include improving the water-use efficiency of their direct agricultural supply chain by 15% in high-water-risk sourcing areas, achieving an additional 25 percent improvement in water consumption by 2025 with a focus on manufacturing operations in high-water-risk areas, maximizing water reuse in high-water-risk areas and ensuring that they replenish 100 % of the water consumed in manufacturing operations and, with its partners, providing access to safe water to a total of 25 million people since 2006 with a focus on communities near where PepsiCo works.
“[A] successful company in 2030 will be the one that recognizes the possible outcomes of the global crises we face, and one nimble and tenacious enough to embed this recognition into their strategy and business processes.” – CEO, Indra Nooyi, May 2008

The Battle at the Top of the World

Science Fiction Will Save the World

Student comments on Is Pepsi thirsty?