The ability to refrigerate your food and cool your home is something that is second nature in our lives; however, the details of how this refrigeration occurs are not usually in the forefront of our minds. Less than a month ago though, this whole landscape of refrigeration and cooling changed. On October 15th, the Kigali Amendment to the Montreal Protocol was agreed upon. This amendment set an aggressive timeline and goal to completely phase out the use of common refrigerant chemicals called hydrofluorocarbons (HFCs) to eliminate this greenhouse gas’ effect on global warming [1]. Many variations of HFC refrigerants exist, but to highlight one place where they can be found we’ll zoom in on the transportation of cold or frozen food across the US.

One of the largest players in this industry is Sysco, with a fleet of over 9,500 trucks transporting “frozen or perishable” food in North America [2]. According to Sysco’s 2014 Sustainability Report (the most recent one available), the fuel used in these trucks is Sysco’s focus when it comes to reducing emissions. An effort has been made to expand and supplement the fleet with more fuel-efficient trucks running on clean diesel and liquid natural gas (LNG) [3]. In addition to the truck itself, the trailers are equipped with refrigeration units. These refrigeration units have two impacts on the environment. The units require a portable power source which could be diesel, gasoline, or other generator fuels. This is the area where Sysco appears to be focusing on by participating in a research project testing out fuel cell powered refrigeration units [3].

Now with the Kigali amendment, the aspect of these units that is more pressing is the refrigerant chemical used to cool the air circulating in the unit.  As found in a spec sheet for a typical unit, the refrigerant used is called R-404A [4]. This refrigerant is a blend of three HFC refrigerants and is considered “non-ozone depleting” per its manufacturer [5]. This may be where the blind spot comes from in this area; despite the environmentally friendly label of “non-ozone depleting” this refrigerant still has high “global warming potential [5]” and falls under the HFC phase out umbrella. It is up to the producers of these refrigerants, refrigeration units, and Sysco themselves to actively address the HFC phase out.

Adaptation for Sysco and others affected by the HFC ban will need to come in the form of alternative refrigeration chemicals. This presents new opportunities for chemical companies to create effective, truly environmentally safe refrigerants [6]. While the refrigeration industries wait for the latest breakthroughs, the phase out deadline is fast approaching. There are existing alternatives that many industries have been using for years or have recently adopted like ammonia and hydrocarbons (HC’s not HFC’s) [6]. In the stationary commercial refrigeration area, hydrocarbon refrigerants have been a popular replacement substance with companies like Ben & Jerry’s even advertising to the consumer their environmentally friendly freezers [7]. 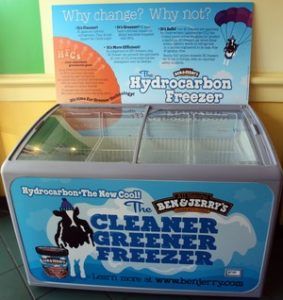 Unfortunately, hydrocarbon refrigerants present some flammability risks that were not present in HFC’s and they do still have some global warming potential (about 1/1000th of HFC) [6]. This leads to a slightly tarnished reputation where the general public may have a perception that hydrocarbon’s being used as refrigerants is dangerous. While the flammability increase is there, it is not enough to cause any rational concern. One of Sysco’s trucks travelling down the highway already contains large amounts of hydrocarbons as normal truck fuel and fuel for the refrigeration units. As long as the retrofit from HFC refrigerant to hydrocarbon refrigerant is planned with all the normal safeguards around hydrocarbons in place, Sysco should be able to lead the way with a successful transition. 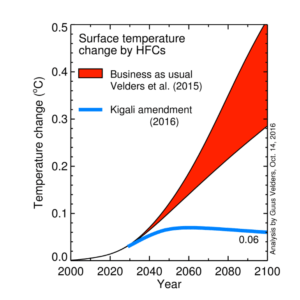 A successful transition from HFC refrigerants should become priority for all companies that use HFC’s due to the impending timeline and the ability to capitalize on the positive publicity related to this change. For the United States, the growth of HFC use will be capped and is expected to have also been reduced by 10% as of 2019. As seen in the graph above the incremental effect of this HFC ban is measurable in the future temperature change of the globe [1]. It is essential for Sysco and other food transporters to plan and determine the best solutions around this HFC refrigerant ban – sooner rather than later.

Student comments on Is my Ice Cream Going to Melt? How a New Global Policy Will Change Cold Food Transportation