Due to global warming, arctic has been warming twice as fast as the global average. As shown in the figure below, scientists from Arctic Institute even projected that there will be ice-free summers in North Pole as early as 2030. [1] 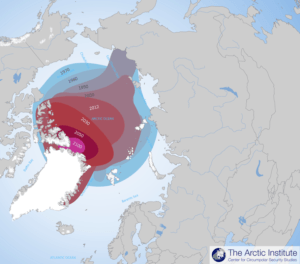 Projection of Melting of Arctic Ice [1]

In the midst of prevalent concerns over global climate impacts of dramatic melting of arctic ice, shipping industries in the countries that border the Arctic Circle has discovered new business opportunities for trans-Arctic shipping, anticipating how climate change is opening up Northern sea route all-year-around. Arctic shipping can contribute to vitalize oil trading by bringing Asia closer to Europe while saving significant amount of transit times and fuel costs. The melting Artic ice would also eliminate vessels’ need of having an escort of nuclear icebreakers, which also saves a great deal of cost for the shipping companies [2]. Embarking on pioneering trans-Arctic shipping, Sovcomflot, the Russia’s state-owned shipping firm, successfully set the world record on March 30, 2017 when its vessel, Christophe de Margerie, has travelled through the Northern sea route in record speed and without an icebreaker escort for the first time. 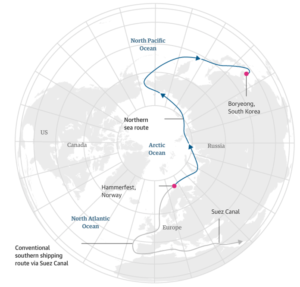 Northern sea route saved about 30% of transit times compared to the transit times using the conventional southern shipping route through the Suez Canal. [3]

Christophe de Margerie was a prototype that Sovcomflot built as the company began serving the Yamal LNG (Liquefied Natural Gas) project, an integrated project for natural gas production on Yamal Peninsula, liquefaction and marketing that involves Novatek, Total, CNPC and the Silk Road Fund as shareholders[4]. As oil and gas productions from many of Siberian fields are growing old, oil and gas exploration in the Arctic have appeared promising to Russia who is heavily dependent on oil and gas exports[5]. Sovcomflot’s two main objectives were to deliver gas from a new $27m facility on the Yamal Peninsula and to enter Arctic shipping as a first mover while taking advantage of the diminishing Arctic sea ice.

In order to pioneer trans-Arctic shipping, Sovcomflot’s short-term commitment for this project was to design the vessels so they can transport LNG all year round. Sovcomflot optimized the specification of its prototype vessel with enhanced hull and reinforced propellers, enabling the vessel to sail independently through ice up to 2.1 m thick[5]. This new enhanced design powered Christophe de Margerie to pass along the Northern Sea Route all year round, extending the navigation window for the northern sea route from four months with an expensive icebreaker during summer to all year round in a westerly direction.

Additionally, Sovcomflot’s mid-term commitment is to construct a series of 15 shipping vessels for the Yamal LNG project, following the remarkable success of its prototype, Christophe de Margerie [5]. In preparation of Yamal plant reaching its full capacity, Novatek, one of stakeholders for Yamal project, is currently evaluating whether to build another LNG plant, Arctic LNG-2, with capacity comparable to Yamal or higher and first production in around 2023[6].

For Sovcomflot to sustain operational excellence over time, I would recommend the company thoroughly assess possible risks of entering Arctic shipping. There are two risks that I suggest Sovcomflot to address: adverse ecological impact of increased traffic in Northern sea route and environmental impact of possible issues caused by leaky engine and emission gases. According to environmentalists, possible adverse impact of increased ship traffic in Arctic’s ecology has not been fully understood [5]. I strongly recommend the company invest in long-term study to closely monitor any possible disruptions for wildlife such as walruses and whales as shipping traffic continues to increase. I also strongly urge the company to evaluate its current preventive measure of oil leaks from the engine and improve mechanical design of the engine to mitigate the risk. Although expedited shipping speed from the application of Arctic shipping can significantly reduce emission of carbon dioxide, the company needs to make sure to eliminate any risk of incomplete combustion of fuel that can eventually contribute to a significant portion of the region’s ice melting by depositing black carbon on ice and snow[6].

According to Simon Boxall, an oceanographer at the University of Southampton, dramatic melting of Arctic ice is unlikely to be reversed even if greenhouse emissions stopped tomorrow[4]. However, is it safe for Sovcomflot to make a significant up-front investment in vessel construction, taking advantage of acceleration in the loss of Arctic ice? Or should Sovcomflot be prepared to modify its level of commitment on LNG project in anticipation of new shipping laws addressing navigational safety and global warming, possibly imposed by international organizations such as International Maritime Organization (IMO)?[6]

[6]  Dasgupta, Soumyajit. “How the ice melting in the Arctic has affected the shipping industry?” Marine Insight. 21 July. 2017. https://www.marineinsight.com/environment/how-the-ice-melting-in-the-arctic-has-affected-the-shipping-industry/

Making Hay: How Drought in California is Affecting Chinese Dairy Farmers and What the Chinese Government is doing about it