Climate scientists have provided constant evidence that increased GHG emissions from human activity has led to a gradual increase in our atmosphere’s average temperature and extreme changes in precipitation patterns, ultimately leading to the world becoming a ‘drier’ place.

For Coca Cola (Coke), which sells its products in over 200 countries across the globe, water is the lifeblood of their business. It is needed to grow agricultural ingredients, used in manufacturing, and essentially the core element in each of their products. As of 2015, ~2L of water is used in producing 1L of Coke. As such, Coke not only suffers direct risks from scarcity of its primary ingredient, but far more importantly a huge reputational risk as the nature of its business puts it in direct conflict with a basic human right to water (Resolution 64/292 United Nations General Assembly in 2010).

Growing up in India, I first saw the emergence of this conflict when in 2005, Kerala state authorities forced closure of one Coke bottling plant for mismanagement of water resources. 10 years on and the company was still battling such issues – the government forcing closure of an old inefficient plant in Varanasi and withdrawing land allocated for a new bottling plant in Tamil Nadu following large scale community protests.

Growing conflicts through the years has led to a realization that climate change will likely have long-term direct and indirect implications for their business and supply chain. As such, efforts have been made to reduce the adverse impact of their manufacturing process on local communities. The key initiatives undertaken revolve around the following 3 themes:

Over the years, Coke has been making improvements in their manufacturing processes and also significant investments in equipment technology to reduce the volume of water required for producing their beverages. While in 2004, each litre of Coke required ~2.7L of water, this has dropped to ~2L in 2015 (see Fig 1). Additionally, modern technology has enabled Coke to process, clean and then return traditional ‘wastewater’ to the communities. As on 2015, Coke was using 149 Billion Litres of water to support their manufacturing processes, of which ~146 Billions Litres was treated and returned (see Fig 2) 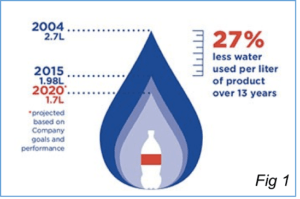 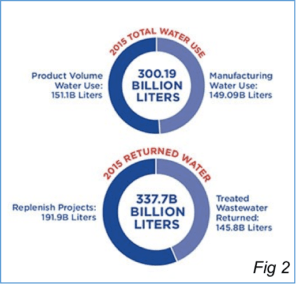 In 2007, Coke took on a bold goal to replenish all the water it uses globally by 2020. Since then the company has implemented 248 community water partnership projects in 71 countries focused on rainwater harvesting, safe water access and watershed protection. Replenish projects have been implemented in the areas where the need is greatest and where the firm has the resources and partnership opportunities to make a lasting impact. For e.g. many such projects were conducted with the expertise and support of many critical partners such as WWF, USAID, The Nature Conservancy, Water for People, and the United Nations Development Programme (UNDP).

As of Aug 2016, Coke announced that they have met the goal to replenish their consumption, which led to a new tagline for their sustainability campaign “For every drop we use, we give one back”. The methodology to calculate water replenishment benefits was created by The Nature Conservancy and LimnoTech and the performance was independently verified by Deloitte.

Although Coke has made significant strides to mitigate the impact of climate change, I believe there are two key areas Coke has not yet focused on:

I truly believe that with the right vision and dedicated efforts, even much maligned industries can make a substantial impact on mitigating the risk of climate change.

Fast Fashion on a Fast Decline via Climate Change

Student comments on Is Coca Cola staying ahead of Climate Change?