Winemaking is a major industry in Australia, with A$2.11B of wine exports for the year ended June 2016. [1] However, with expected shifts of 0.4 to 3 Celsius in Australian viticulture areas [2] and a grape maturation process that is highly sensitive to climate, Australia’s position as a leading exporter of wine could be threatened. Treasury Wine Estates (TWE), the second largest Australian winemaker by volume and one of the largest winemakers in the world [3], is trying to proactively find ways to survive and thrive in a changing world.

It doesn’t take a viticulturist to know that increasing global temperatures can turn grape-growing paradises into barren landscapes. But, even before that doomsday scenario, global warming can have sinister effects on the grape-growing process. One such effect is earlier ripening. (Figure 1) 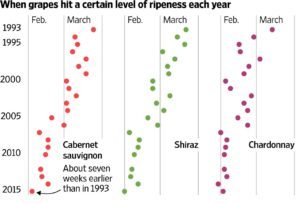 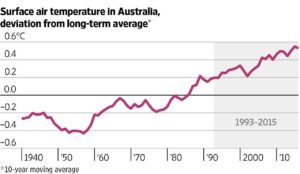 You may be asking – so what? You can get the same great-tasting wine earlier, right? Unfortunately, no. Grapes that ripen early just don’t taste as good. In fact, global warming may lead to reduction in grape quality in Australia by 12 to 57 percent [2]. Who wants wine that tastes 57% worse? Not me!

Another challenge is that the ripening period also narrows with warmer weather. This is a supply chain nightmare, as you end up with tons of grapes to process in a short period of time, but not enough capacity to ferment them all. And leaving them on the vine for extra time is not an option. On the vine, the grape continues to ripen and accumulate more sugar. More sugar means more alcohol during the fermentation process, which means compromised flavor (allegedly…). [3]

So, what’s an Australian wine company to do?

TWE has recognized climate change as a major risk to its business, and is pursuing a proactive mitigation plan along multiple dimensions (in fact, they’ve been planning since 2004!). [4] [5] This includes:

Pruning vines later in the year, which delays ripening. You can use different pruning strategies to help stagger ripening of grapes on different vines, alleviating the backup in the fermentation process. Simple strategy with no additional cost. [3]

Buying land in cooler areas of Australia and selling land in warmer areas according to a master plan. TWE has been buying land in the cooler climate of Tasmania, and has sold its vineyards in the Hunter Valley (original home of the world-famous Lindemans brand) which TWE described as becoming “hot and dry and expensive”. [6] Ouch. At least Hunter Valley had its day in the sun.

Improving information collection and sharing across the supply chain. TWE is using “data-rich, interactive maps to analyze environmental changes and inform harvest strategies.” There used to be a two-week gap between the white winemaking season and the red winemaking season. As the climate has warmed, the seasons now sometimes overlap, increasing supply chain complexity. These maps allow TWE to navigate that complexity and evaluate the health of the grapes in real-time, allowing it to tweak processes along the entire supply chain based on that information. [7][8] With shorter ripening periods, time is of the essence.

What Else Can Be Done?

TWE is certainly on top of its global warming strategy, but it takes more than the efforts of a single company when an entire industry is at stake. TWE and other winemakers in Australia should freely share strategies and technologies to mitigate the effects of global warming. When you have the latest and greatest idea or technology, it might be painful to give it to your competitors. But it’s very possible you need every technology and strategy out there to be able to survive. And that’s a reason for everybody to share.

I also believe there should be an increased focus on technological improvements that can help combat the effects of global warming. It can be difficult to support this research, which hits your bottom line without any guaranteed payoff (and the payoff may be used by your competitors even if they contributed nothing). But continued technological advances may be needed for industry survival.

Student comments on Is Australian Wine Going the Way of the Tasmanian Tiger?