In the U.S., more than 100 million people live along coastal areas [2] and 9 million live on low elevation zone areas that are less than 8 feet above the local tide lines [3]. Given the scale of the population exposure to flood zones, the financial and logistical challenges involved in assessing and addressing flood risk due to global warming have been immense. The U.S. has experienced its worst run of natural disasters over the last two decades, with the greatest financial losses stemming from flood-related disasters such as Katrina ($150 billion), Sandy ($50bn), Hurricane Andrew ($45bn), Midwest Floods ($34bn), Ike ($30bn), and more than a dozen others that have yielded losses of over $10bn[4].

The bulk of flood insurance in the U.S. is underwritten by the National Flood Insurance Program (NFIP), a division of the Federal Emergency Management Agency (FEMA). In 2016, the NFIP underwrote nearly 6 million flood insurance policies and collected $3.5bn of flood insurance premiums. Unfortunately, the premiums are nowhere near enough to the scale of risks assumed. The value of flood-insured assets along the U.S. Coastal areas is roughly $10.6 trillion, with $1.25 trillion directly assumed by the NFIP [5] highlighting the scale of insurance funding gap. In the last decade, the NFIP has incurred $30bn in losses and still owes $24bn in outstanding debt to the U.S. Treasury that it is unlikely to repay. 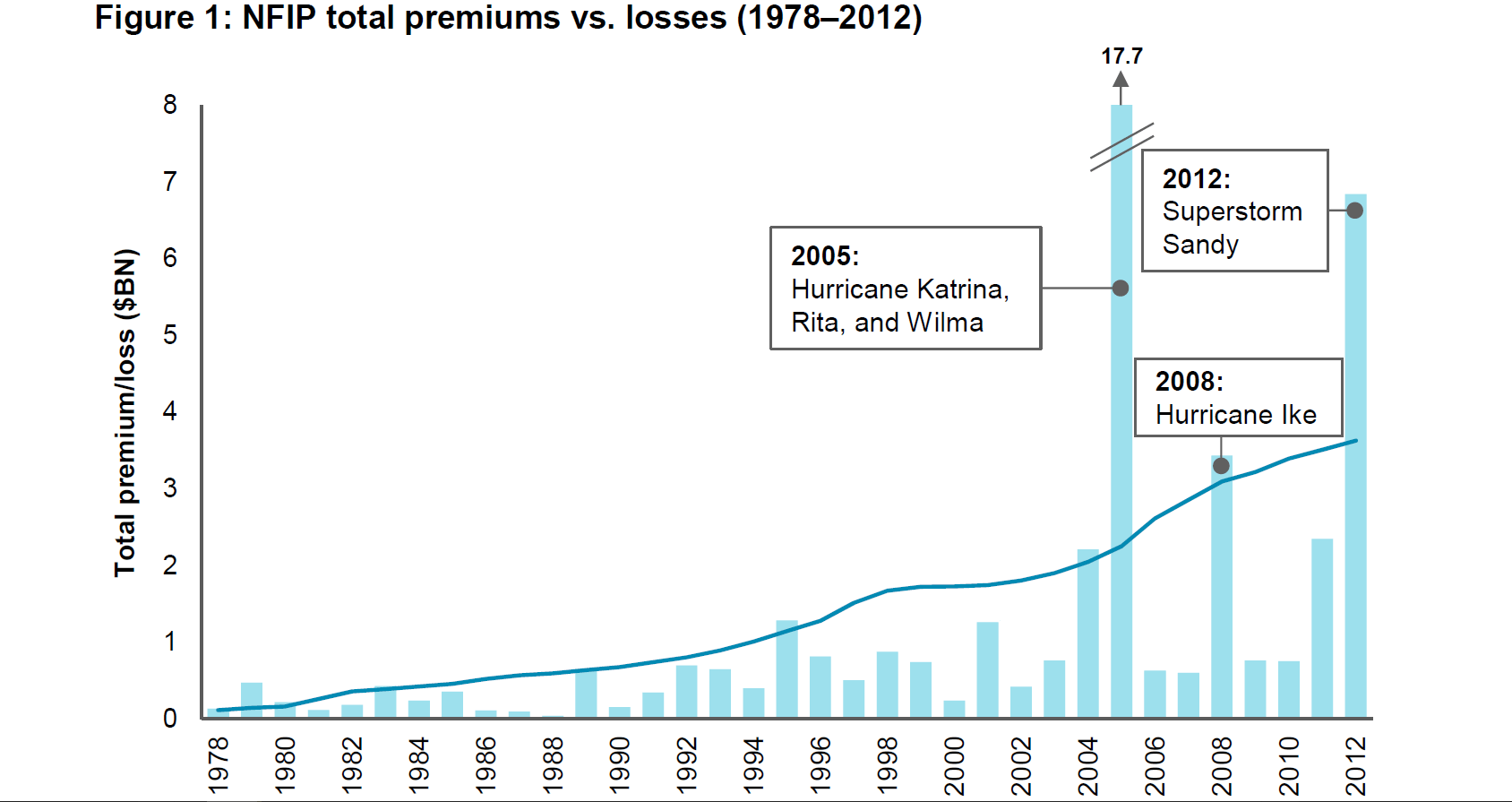 Climate Change and the Challenge of Insuring Flood Risk

Insuring flood risk is particularly challenging because of the scale of the underlying financial risks, and the difficulty in mitigating the risk profiles of those affected since this would require mass relocations of millions of people living in flood plains in the U.S. Forecasting the risks becomes particularly challenging in the face of climate change, but it is expected that by 2050, annual flooding losses in the world’s coastal cities is expected to hit $1trillion globally, with nearly 40% falling on four cities, three of which are in the U.S, i.e. New Orleans, Miami,   and New York [7].

Insuring flood risk has some fundamental issues. First of all, assessing flood risk is difficult since it requires complex assessment methodology that needs to take into account the geographic distribution of flood maps of the entire country to a very high degree of accuracy, typically within a meter – and also requires assessment at a property level to determine the specific premiums that a particular premiums that a specific property should be charged.  Without subsidization, the cost of any kind of insurance premium should – at a very basic level – match the value of the insured asset versus the probability weighted risk of the incidence occurring. Part of the challenge in flood insurance is that the incidence of flood risk has increased significantly as a result of climate change, but the insurance premiums that the NFIP charges are typically locked in for extended periods. Thus, thirty years ago, a household may have been located in an area with a 1:500 flood risk area (i.e. with the risk of flooding estimated at 1 in every 500 years), but the risk may have changed during the same time to 1:30 due to climate change. The magnitude of this change highlights how significant the change in premiums needs to be to actually address the risk. Removing the subsidies would drive up the premiums for a house by tens of thousands of dollars a year, with many households in the U.S. potentially expected to pay over $100,000 in insurance premiums. These premiums are out of reach of many households, and this has led the NFIP to maintain old premiums for households under it’s “grandfathering” practice [5].

The financial risks faced by the NFIP are urgent and immense. In the long run, it will be necessary to push for more regulation to ensure that the subsidies in flood risk are eliminated so that premiums reflect the fully-baked in costs of the financial risks assumed by property owners. However, political pressure to maintain existing rates means that this strategy is untenable. In the short-to-medium term, the NFIP should pursue a number of options to start addressing flood risk, including:

Hess Corporation: Can Oil Companies Be Part of the Solution…Or At Least Less of the Problem?

Student comments on In Too Deep? The Future of Flood Insurance in the Face of Climate Change