The pain of the international money transfer

TransferWise was inspired by the personal experiences of Estonians, Taavet Hinrikus, employee number one at Skype, and financial consultant, Kristo Kaarmann.

Taavet had worked for Skype in Estonia, so was paid in euros, but lived in London. Kristo worked in London, but had a mortgage in euros back in Estonia. They devised a simple scheme. Each month the pair checked that day’s mid-market rate on Reuters to find a fair exchange rate. Kristo put pounds into Taavet’s UK bank account, and Taavet topped up his friend’s euro account with euros. Both got the currency they needed, and neither paid a cent in hidden bank charges.[i]

“There must be others like us,” the epiphany went.

And the rest is TransferWise. 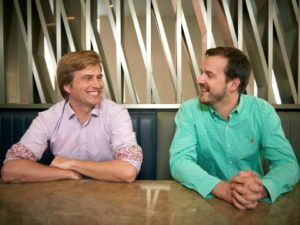 The company, one of London’s “unicorns”, is backed by high-profile investors such as the venture capital firm Andreessen Horowitz, the billionaire Sir Richard Branson, and Peter Thiel and Max Levchin, the co-founders of PayPal[ii] — observers say it faces the same challenge of building scale that many fintech startups do. The company says it transfers more than $1 billion a month on its network.[iii] 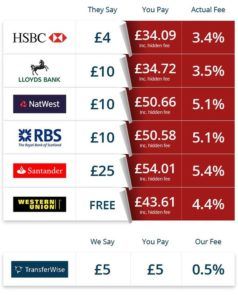 Banks often claim they charge no fees to send money abroad. In reality, they take money from customers by marking up exchange rates.[vi]

Here RBS is advertising a flat fee for international money transfers. Unfortunately for customers, sending money abroad with RBS will not end up costing £10. When breaking down their fee structure, RBS neglect to disclose that customers will lose money through their exchange rate markup. 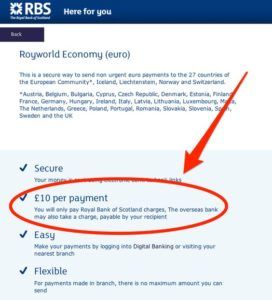 Here, Citibank makes a strange distinction between ‘free’ and ‘fee-free’. Since banks and brokers are not obliged to be transparent and call the money they make from exchange rate markups ‘fees’, adverts like this can look accurate. They are misleading as they encourage the customer to think that transfers are actually fee-free – resulting in a nasty shock when they look at their bank statements. 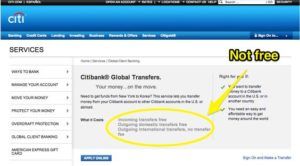 Western Union are one of the worst offenders for falsely advertising free transfers. They claim that you won’t incur any fees when you send money abroad with them. But as we have learnt, ‘fees’ don’t seem to include Western Union’s more clandestine exchange rate markup. 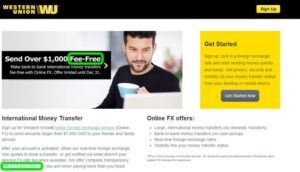 From the customer’s point of view, money transfers with TransferWise are not so different from conventional money transfers: the customer chooses a recipient and a currency, the money to be transferred is taken from his or her account, the transferring company charges for the service, and some time later, the recipient receives the payment in the chosen currency. The difference lies in how TransferWise routes the payment.[vii]

“Your” money never actually moves across a border — it’s rerouted to someone who’s being sent a similar amount by someone overseas.[viii] Your foreign recipient, meanwhile, receives their funds from someone trying to send money out of their own country.

TransferWise’s genius is that its customers never have to deal with this peer-to-peer complexity. TransferWise’s technology finds someone who wants to transfer money in the opposite direction (euros into pounds). The system automatically matches the currency flows at the real mid-market exchange rate (as you would find in newspapers or at xe.com) and then pays out from the local euro or pound account.[ix] 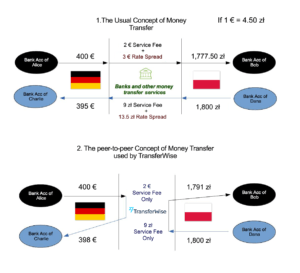 TransferWise, allows you to transfer money up to 8 times cheaper than with the bank. The business product comes with no sign-up costs or monthly fees. Just a 1% fee per transaction, and 0.7% for amounts over $5,000.

“Silicon Valley is coming,” JPMorgan CEO Jamie Dimon warned in his annual letter to shareholders last year. “Rest assured, we analyze all of our competitors in excruciating detail — so we can learn what they are doing and develop our own strategies accordingly”.[xii]

A partnership with a big bank would make sense for TransferWise to build the type of disruptive business it really wants to be. The big volume would give the company immediate scale, something that many fintech startups hunger for. Of course, those same banks may be uninterested in disrupting their existing business models.[xiii]

Alternatively, regional banks might be a particular sweet spot for TransferWise. Few see foreign money transfers as a profitable business line; the ones that are in the business are often doing it to serve their customers who ask for it. Small, innovative banks, the type that already have several fintech partnerships, are also a possibility as they look to build out their product offerings.[xiii]

TransferWise organized a guerrilla marketing campaign early last year where it led people on a run through Manhattan in their underwear “in the name of transparency.”[xiv] Just a few days ago, 100 TransferWise revolutionaries took to the streets of London with nothing to hide.[xv] Will Jamie Dimon be the only person with his clothes on? Probably. 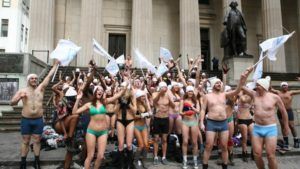 Over 200 people hired by TransferWise stripped down to their underwear during a busy lunchtime in Manhattan and marched through Wall Street.

[v] All data was obtained independently by market research company TNS. The fieldwork was carried out between July-September 2015 and shows the overall quoted costs of sending £1,000 internationally through UK banks via online transactions.

Emirates: Data and the Future of Air Travel

Student comments on In the name of transparency: TransferWise says “Bye Bye Banks”