As it wreaked havoc across the Atlantic Coast of the United States in October 2012, Superstorm Sandy took with it lives, homes and businesses causing an estimated damage of over $25bn[i]. The hurricane left behind a clear message: the debilitating effects of global warming are here to stay[ii]. Perhaps more importantly, the destruction demonstrated that even in a developed country like the United States, low income communities are disproportionately vulnerable to the consequences of climate change.

In New York alone, 270,000 low-income households and 97,000 senior households were directly in the storm surge of Hurricane Sandy[iii]. The storm impacted 10% of all public housing units in New York City, leaving approximately 400 buildings without electricity, heat and hot water. The single entity that was had to bear $3bn[iv] in damages as a result? The New York City Housing Authority, or NYCHA, which administers public housing in the five boroughs of New York City. 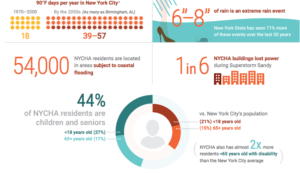 In addition to the burden on its residents, climate change is likely to exacerbate NYCHA’s costs through a number of channels, including:

These risks present a monumental challenge to NYCHA’s operating model, which is particularly concerning given the housing authority’s bleak financial position. A combination of federal funding shortfalls and costly operations over the years have resulted in a current need for $17bn in capital improvements in NYCHA’s buildings.[vi] The incremental costs stemming from the effects of climate change means that NYCHA faces an immediate, real risk of receivership if it does not transform its operations.

A Long History of Sustainability

Because NYCHA depends on limited federal government funding for its operations, one of the ways in which it has achieved cost savings to-date has been by being a first mover in sustainability. The timeline illustrates NYCHA’s sustainability related milestones, dating back to the 1973 oil embargo. [vii]

Despite these measures, NYCHA has a very long way to go still. With technology advancements in energy efficiency, renewable energy, sustainable building design and recycled materials that offer NYCHA a unique opportunity to use sustainability as the tool to transform its operational practices and end its downward spiral and become financially solvent.

Realizing that the status quo was no longer viable, in early 2016, NYCHA announced its first ever ten-year plan to achieve financial stability. The cornerstone of this roadmap is a Sustainability Agenda to preserve public housing for the future. The agenda’s initiatives broadly fall into three categories:

Notably, tangible goals set by NYCHA include a 30% reduction in greenhouse gases by and the development of 25 MW of renewable energy capacity by 2025[viii].

While the Sustainability Agenda lays out a detailed long-term plan and lofty goals for climate justice and resilience, given resource constraints, it is critical that NYCHA target its effort on immediately actionable projects. A successful implementation is contingent on strong partnerships with community organizations and the private sector for financing and project management. An ideal project that accomplishes the above is a community solar microgrid that will enable NYCHA to meet its target renewable energy capacity, create significant cost efficiencies and economically empower its residents. A microgrid offers NYCHA developments resilience during hurricanes while reducing dependence on distributed energy and fossil fuels. In addition, a community-led project would enable NYCHA individuals and community-based organizations to be co-owners of the solar project and create green jobs for residents. Lastly, a resident-driven initiative is that it will foster awareness for environmentally friendly practices and conservation in NYCHA’s communities.

[i] “Sandy and its Impacts” http://www.nyc.gov/html/sirr/downloads/pdf/final_report/Ch_1_SandyImpacts_FINAL_singles.pdf

Student comments on In a torn up town, no post-code envy: The New York City Housing Authority