The Beginnings of Luke’s Lobster

Luke Holden, a Maine native, opened the first Luke’s Lobster shack in New York City in 2009. Like many impressionable college graduates, the lobsterman-turned-investment banker had followed his friends to New York to pursue a career in finance. Upon arrival to the Big Apple, Holden realized that it was nearly impossible to find a high quality, affordable lobster roll. Soon he was writing the business proposal for what would eventually become Luke’s Lobster, a chain of 20 seafood restaurants spanning 9 states, on track to reach over $24 million in revenue by the end of 2016 [1].

Like polar bears, lobsters face an uncertain future. Once upon a time, lobsters were so abundant in the northeast that people would catch them by hand while walking along the shoreline. Now, vast stretches of New England are devoid of the crustaceans, a lobster drought inextricably tied to the ever-warming oceans. A new study conducted by researchers at the University of Maine Darling Marine Center and Bigelow Laboratory for Ocean Sciences found that lobsters will be extinct by 2100 due to warming waters caused by climate change [2]. The United Nations predicted that waters in the Gulf of Maine, where most of America’s remaining lobster fisheries are located, will warm by five degrees in the next 84 years—an environment in which lobster larvae cannot survive [2].

It does not take a crystal ball to see a possible future for the Maine lobster industry—all it takes is to look south. Although right now the country’s lobster catch is strong, with U.S. fishermen having topped 100 million pounds of lobster for seven years in row, the looming climate crisis is already visible in Southern New England. Warming water temperatures have been pushing the lobster population further and further north for decades, first decimating the industry off the coasts of Rhode Island and Connecticut, then off Cape Cod. The lobster catch south of Cape Cod fell to ~3.3 million pounds in 2013, 16 years after it peaked at ~22 million in 1997 [3]. Therefore, it is cause for concern that despite the industry booming in Maine, with record landings in the last three years, the focal point of the catch has changed throughout the years. It is evident that one of Maine’s iconic industries, inseparable from and indispensable to so many communities, is being disrupted. 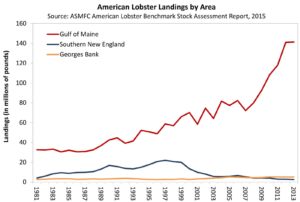 Despite their vulnerability to future climate threats, the Maine lobsterman have been ahead of the curve on sustainability for more than a century. The state passed the country’s first sustainability law in 1879, which established the lower threshold on legal lobster size (requiring fishermen to throw back small lobsters). Today, similar sustainability measures have been integrated into every step of the lobstering process—from “trap to table.” On top of minimum and maximum size restrictions for lobsters that can be caught, lobstermen throw back female lobsters bearing eggs and lobstermen are limited to 800 lobster traps per commercial fisherman. Licenses for the Maine lobster fishery are closed, so no new lobstermen may start lobstering until others retire [4]. Luke’s Lobster’s personal Guide to Sustainable Seafood Practices can be found below.

In order to ensure sustainability and traceability of its lobsters, Luke’s Lobster owns and operates one of the largest processors in Maine, Cape Seafood. By doing so, Luke’s Lobster established a vertically integrated business model. They do not own their boats, but by owning the processing portion of the supply chain, Luke’s Lobster can verify that the lobster used in their rolls is not only sustainably sourced, but also sustainably processed [5]. As explained by Luke Holden, “creating Cape Seafood allows the Company to take a day’s production and trace it back to the individual lobsterman, what catch they had that day, which day they caught it and what area and what harbor they came into that day.”

The Future of Luke’s Lobster

At a time when overfishing and climate change continue to vex the seafood industry, the story of the sustainability of Maine’s lobster fishing industry provides a ray of hope. Luke’s Lobster is already abiding by sustainable practices, thinking strategically about ways to improve fisheries in order build resilience within its span of control. It is important for Luke’s Lobster to understand the challenges it is facing. When founded, Luke’s Lobster sourced 100% of its lobsters from Maine. As noted above, the focal point of the industry is shifting as our oceans warm—a signal of the industry’s vulnerability to change. In order to stay relevant, Luke’s Lobster must pay attention to these changes and be willing to adapt accordingly. It takes a great lobster to make a great lobster roll, and it is critical that Luke’s Lobster knows where to find them, as it is impossible to make lobster rolls without lobsters.

Mortgages: Not the Only Thing “Underwater” in Miami Beach

12 thoughts on “Imagine A World Without Lobster Rolls”