Nearly ten years after the beginning of the “Shale Revolution,” the battle lines in the fracking debate are drawn. Environmentalists point to pollution, noise, water usage, and a host of other ills, while advocates point to a reduced dependency on foreign oil among other benefits. Many in the industry have embraced natural gas as the fossil fuel of the future: cleaner than coal and oil, it cannot be spilled into the nation’s oceans nor does its extraction reshape mountaintops and hillsides.

Southwestern Energy: An Example for Its Peers

But is natural gas truly cleaner if the effects of the methane that leaks from the nation’s wells, gathering lines, compressor stations, and pipelines are taken into consideration? Some critics assert that natural gas producers have enriched themselves and their shareholders while hiding the commodity’s negative consequences for the atmosphere in plain (but odorless) sight. One company, however, is intent on changing the status quo. Southwestern Energy, the nation’s third-largest gas producer, has decided that if natural gas is to have a future in the United States, producers must address fugitive emissions, or the methane that escapes from wells and pipelines on its way to the end user. As the owner of some 9.8 billion cubic feet of proven reserves and the operator of almost 7,000 wells nationwide, the Company’s efforts, if successful, could significantly impact the way the energy industry thinks about climate change and environmental compliance. [1]

Southwestern has dedicated significant resources to finding methane leaks. In 2014, it led the creation of ONE Future, a coalition of energy companies who have committed resources to developing new technology solutions to challenges associated with natural gas. ONE Future has released studies illustrating the economics of leak detection and repair (LDAR) programs, which oil and gas operators have long resisted implementing under the argument that they are too expensive. [2] (See Exhibit 1) 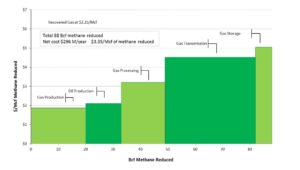 The effort is not entirely selfless. Southwestern has an interest in ensuring the continued relevance of natural gas, as Mark Boling, an executive vice president at Southwestern, explains, “Natural gas is the bridge to a low-carbon future, but if it’s a rickety bridge that leaks methane, why would you take that bridge?” [3]

The Economics of Compliance

Indeed, the Environmental Protection Agency (EPA) feels the same way. In early 2016, the EPA approved sweeping regulations aimed at curbing fugitive methane emissions. These new rules represent the first direct regulation of methane as a greenhouse gas, and once fully implemented, will have an acute impact on the operations and economics of natural gas producers. [4] Known collectively as Quad Oa, they require well and pipeline operators to conduct quarterly inspections on their wells, pipelines, and compressors. The personnel, training, equipment, and technology required to comply will challenge the current business models and practices of both producers and pipeline companies, especially given the tight profit margins of a low commodity price environment.

It Depends on Your Assumptions

The EPA suggests that these regulations will have a net economic benefit to the operators given that the methane that would have otherwise leaked into the atmosphere will be now sold to end users. However, that calculus is based on natural gas prices that are no longer realistic. In late 2014, prices peaked near $5.00/mcf, whereas they are currently hovering around $2.80/mcf. [5]  Natural gas companies simply do not produce as profitably, leaving little excess cash available to pay for inspectors and their equipment.

Despite widespread wailing and gnashing of teeth from much of the industry, Southwestern is embracing the new regulatory environment. [6] The Company began to experiment with various LDAR programs and technologies as early as 2013, purchasing forward-looking infrared (FLIR) cameras in order to conduct inspections of its wells and gathering lines. In three years, the Company has succeeded in driving down inspection costs to $400 annually for a well and $2,000 for a compressor station. At $2.25/mcf gas prices, that saves $150 of gas every year at each well and $2200 worth of gas every ear at each compressor station. [7]

Technology is the Way Forward

The regulatory urgency to mitigate fugitive emissions has resulted in a wave of innovation in the fields of gas detection and monitoring. Startups like Multi-Sensor Scientific and Rebellion Photonics have secured venture funding and have begun to commercialize in situ leak detection technologies, potentially eliminating the need for inspections altogether. Southwestern should build on the progress it has made by continuing to invest in new technologies, as they represent progress towards helping the industry mitigate the climate threat posed by fugitive methane emissions while allowing natural gas producers to economically produce and sell natural gas, which is truly the most pragmatic fossil fuel for the near future.

The Mining Industry: An Architect of its Own Downfall?

Student comments on Hunting for Methane Molecules: Hot on the Trail of Fugitive Emissions