Snow is the lifeblood of ski resorts – it’s what draws people to the mountains for skiing, snowboarding, snowmobiling, and other activities. The milder, less predictable winters resulting from climate change pose a long-term existential threat to the $66 billion dollar a year winter sports industry.[1]  But for Vail Resorts—which operates 13 ski resorts, predominately in the western United States—these challenges present an opportunity to expand and diversify its offerings.

Vail Resorts has long used adaptation strategies to manage variability in snowfall. Like 88% of U.S. ski resorts, Vail ski areas use artificial snowmaking to manufacture snow when Mother Nature does not. Vail Mountain (the company’s first resort) pioneered cloud seeding in 1972, in which it sends silver iodine into clouds, causing them to yield as much as 15% more snow.[2]  These adaptation strategies still require minimum temperatures of 32 degrees; otherwise the manmade snow will melt.

In Lake Tahoe, where Vail operates Heavenly, Northstar and Kirkwood, drought conditions and warm temperatures made the four seasons between 2012-2015 among the worst in a century. [3]  Skier visits for the 90 days ending April 30th dropped by 33.1% from 2014 to 2015.[4] However, Vail’s takeover of both The Canyons and Park City Mountain Resort in Utah over the course of 2013 and 2014, which it later combined into a single Park City ski area, helped offset the impact of poor conditions in Lake Tahoe. In fact, due to Vail’s geographic diversification strategy, in 2015—the worst year on record in one of its core regions—revenue actually increased by 11.6%.[5] 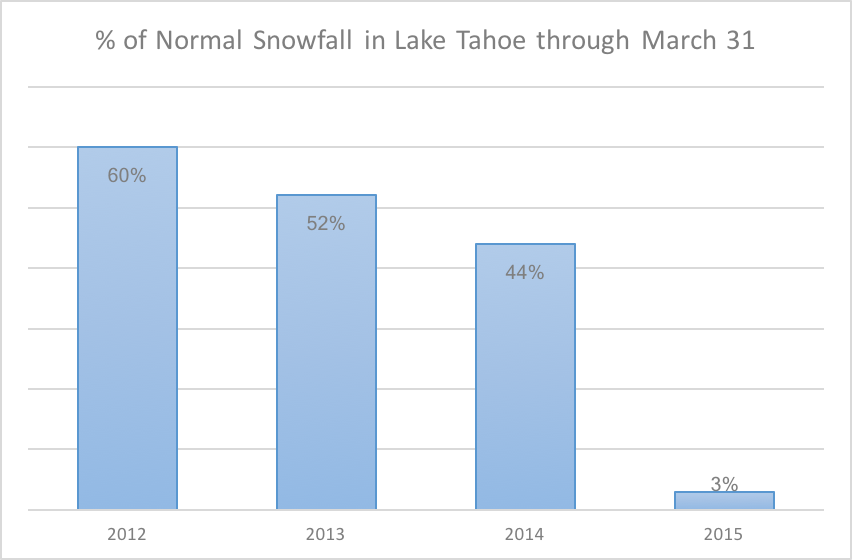 Vail continues to pursue this strategy to reduce the impact of climate change. Last month, it completed its acquisition of Whistler Blackcomb in Canada’s British Columbia, the continent’s largest ski resort, to secure additional geographic diversity.[6]  Holders of Vail’s popular Epic Pass can ski at any of Vail’s resorts, so avid skiers can purchase the pass over the summer at a discount (it was $809 this year) before the ski season even launches, knowing they’ll likely have several different options for great skiing.[7]

Vail has made other creative acquisitions related to climate change. In 2015, it acquired Perisher, in New South Wales, Australia, the country’s largest ski resort. Conditions at Perisher have become consistently poor due to warmer temperatures and reduced snowfall, but it provided Vail a foothold in the Australian market to develop relationships with local skiers and ultimately entice them to their North American resorts where conditions are better.[8]

Vail is also hedging against variable winters is by bolstering summer offerings. While more tourists come to Colorado, Utah and Lake Tahoe in the summer than in the winter[9], Vail Resorts operates at a loss during summer months because it has not been able to monetize these visitors as they can with skiers and snowboarders who pay for lift tickets, rentals, and lessons (full day private lessons at Vail Mountain cost a whopping $925!).[10] In summer 2016, Vail launched its Epic Discovery summer activities program at Vail Mountain and Heavenly, featuring activities like mountain coasters, tubing, ropes courses, and rock climbing. The company plans to spend up to $100 million rolling out Epic Discovery at other resorts, with Breckenridge preparing to debut its offerings in summer 2017.[11]

While Epic Discovery helped decrease Vail’s summer losses from $70.1 million in 2015 to $65.3 million in 2016, it is hard to imagine enough people paying for activity passes in the summer to compensate for shorter ski seasons.[12] After all, some of the most popular summer activities like hiking are free, while winter sports cost money. Vail could raise the price of its Epic Passes and include access to summer activities. That way they could recognize additional revenue during the summer months and also incentivize people to return to Vail Resorts during the summer and spend additional money at their restaurants, hotels, and shops.

Vail should also further diversify its revenue streams. Currently, it has three different segments: mountain activities, lodging, and real estate, which generate 82%, 17%, and 1% of revenues, respectively[13]. Lodging revenues are from hotels serving ski resorts, where business is susceptible to seasonal variability. Leveraging its expertise and scale in hospitality, Vail might consider expanding its RockResorts brand to include beach and golf resorts and leveraging its relationship with the National Park Service to build additional summer lodging at National Parks throughout the country beyond its extant Grand Teton properties.

While many experts are bearish on the future of ski resorts, Vail shows us that these companies need not melt into oblivion.[14] Vail Resorts is future-proofing itself through its expansion and diversification strategy and Wall Street has reacted with an all-time high stock price.

Some models suggest over half of the Northeast’s ski resorts will not be economically sustainable by 2039 and that the Rocky Mountains could have no snowpack by 2100.

[7] As a ski blogger who goes by Barclay put it, “Vail has created the ultimate game of ski condition musical chairs. When it rains in Whistler, Epic Pass holders can head to Colorado. And when drought strikes California, its pass holders can head north and ski Whistler.”

Terry Root, a Senior Fellow at Stanford’s Wood Institute for the Environment, conveyed the pessimistic outlook many have on the ski industry when she said, “There’s going to be good years and there’s going to be god-awful years. The globe is warming so rapidly, and variability is increasing so much – both of those things together, I’m glad I don’t have stock in ski areas.”

Climate Change and the Department of Defense

The insatiable appetite of climate change