The aviation industry produced 815 million tons of CO2 in 2016, contributing to 2% of manmade CO2 emissions – greenhouse gases emissions – worldwide1. This percentage is not expected to increase to more than 3% by 2050, but since it is driven mainly by growing passenger demand, emerging markets play a key role in this trend1.

LATAM Airlines is Latin America’s leading airline, present in six domestic markets in the region and flying to 140 destinations in 25 countries2. The company employs 43.000 people worldwide and operates 1.200 flights per day with its 322-aircraft fleet2. How would you think the growing concern of the climate change produced by the aviation industry CO2 emissions affects such a large company?
Industry regulations, social responsibility, and the fact that CO2 emissions are directly linked to fuel consumption – fuel is the most important element in the company’s supply chain (see Exhibit) -, among others, are things that must be in all annual board meetings and affect short and long-term investment decisions of LATAM Airlines. 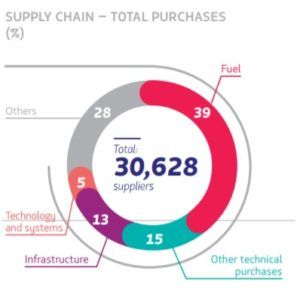 As seen in the company’s annual report for 2016 and its Sustainability Report for the same year, several actions either have already been taken or are planned to address the described impact of climate change3 4.

These actions among others allowed LATAM Airlines to be acknowledged as Climate Strategy leader in the Dow Jones Sustainability Index3.

In spite of the above described clearly strong efforts towards the climate change cause, there are still possible steps for the company to take in order to replicate industry leaders’ actions.

We have seen how LATAM Airlines affects and is affected by climate change, with several steps already taken by the company and some additional that could be addressed in the upcoming years. The question to ask ourselves now is, would the company be willing to invest substantial money in improving its CO2 emissions if it did not gain in fuel consumption efficiencies?

Can Nike use 3D-printing to sustainably mass customize its offer to consumers?