Technology has changed how most of the companies in the world operate, from mature industries such as Automotive and Mining, to Internet of Things and Virtual Reality. In the healthcare field, specifically, digitalization has severely impacted the Mental Health area: the percentage of American citizens with any mental health issue (e.g. anxiety, depression, behavioral and mood disorders, etc) has skyrocketed in the past years, reaching the alarming rate of 1 every 5 Americans. That´s over 40 million people.[i]

The issue is even more serious among youth, especially within women, where the percentage of young females with a major depression episode grew from 12.1% in 2011 to 19.5% In 2015.[ii] 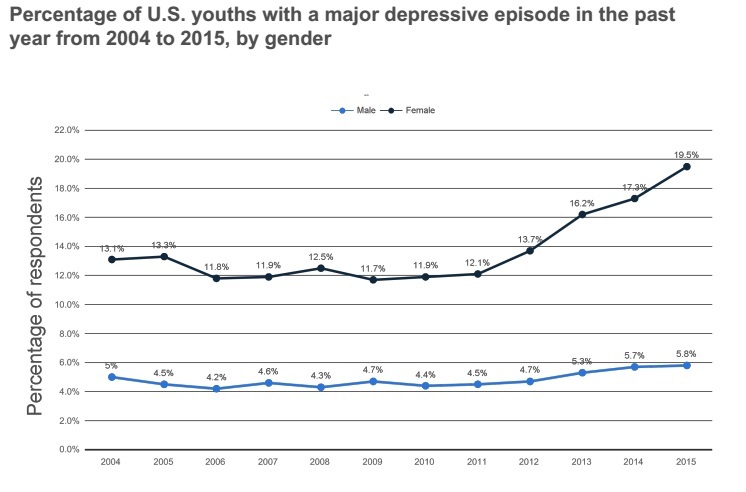 This recent increase is explained by several different reasons:

Digitalization and access to information have increased our life expectations into unprecedented high levels. The growth of social networking, excessive internet use, sleep deprivation and multitasking lifestyles have all been putting us under intense pressure – and the impact is directly related to mental health disorders.

However, digitalization has opened the doors for new services to improve the field´s current inefficiencies (opportunities) as well. Labor utilization, service accessibility and cost optimization are some of the elements that start-ups across the world have been successfully addressing.

One of the companies that have been leading this change in the industry is Talk Space, by making therapy more available and affordable through the internet. The company has over 1,000 licensed therapists, who provide therapy via messaging and real-time sessions. Sessions can be held through their website or app-based.

Talk Space differentiates itself from off-line providers mostly through technology. Its platform allows patients to have (1) anonymous sessions, (2) lower-cost treatment and (3) more accessibility through its unlimited messaging between patients and providers.[iii]

By being anonymous, Talk Space overcomes one of the biggest obstacles that prevents people from going to a therapist, reaching a broader audience that have never undergone therapy before because of the stigma and dishonor associated with that.

By providing a lower-cost treatment, not only new patients have started to use the service, but also the recurrence has increased. Additionally, by having an unlimited messaging package, patients are in constant contact with their psychologists, increasing service accessibility.

From 2012 to 2016 the company raised $28M and improved its service in several fronts: it developed Android and iOS applications, improved the quality of its providers, implemented marketing and public press initiatives, and implemented different price schemes.

On the anonymous side, the company has invested on developers and programmers to implement cryptography within its services. They have also partnered with Paypal and Payment gateways to have a smoother customer experience. The product is extremely user friendly and intuitive, making people feel less resistant to new technologies.

In regards to the service accessibility, its app-based version allows the patient to get in contact with his or her psychologist through messaging from anywhere, anytime, for only $128/month.

Currently Talk Space does not accept private insurance, Medicare nor Medicaid. Medicaid Mental Health spending, specifically, is predicted to increase from $61.1 billion to $67.4 billion with the impact of Obamacare in 2016.[iv]

In regards to Medicaid´s reimbursement to Telehealth, different types of services can be covered, depending on where (which state) the service was provided, which platform was used, and what types of professionals (social worker, counselors, psychologists or psychiatrist) provided the service.[v] In summary, there are several regions in which Talk Space could leverage on Medicaid but so far it has not been applied yet, either because of technology, scalability or research limitations. Still, it´s a huge opportunity for the company.