Little did Netflix know when it launched its DVD by mail service in 1997, and officially when it switched its focus to streaming in 2007, it was creating the company, and more broadly the movement, which would disrupt the pay-TV business. Since 2011 in the US, cable subscriber growth has declined annually at 0.43% – a cumulative loss of 1.7M households[1] – while Netflix has grown subscribers at 19.87% – a cumulative gain of 23.1M households[2]. Netflix’s business model of spending heavily on off-air, and eventually original, content chosen based on big data analysis while charging consumers a much lower price than in-market alternatives, combined with its streamlined operating model of connecting consumers directly to content creators via the internet, have fueled this growth. Specifically, Digitization enabled Netflix to grow by creating a new, superior distribution medium and allowing for additional and highly relevant content creation. To sustain its growth, Netflix must continue to deliver high quality experiences that take up less bandwidth for consumers. 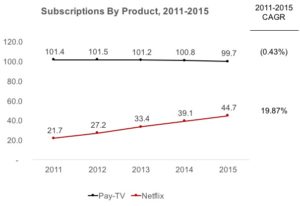 Today roughly 1/3 of households subscribe to Netflix and Netflix is the #1 consumer of bandwidth in the US, at 35%, while the next largest, YouTube, is at 18%. However, this was not always the case. Netflix leveraged increasing internet availability and speed to disrupt the content supply chain by connecting consumers more directly with studios and content creators. Since 2011, US households with access to internet have increased by ~12M, from 79M to 90M[3]. Over the same period, average internet download speeds have increased from 4.7 Mbps (megabits per second) to 14.2 Mbps, an over 3x improvement which has greatly reduced buffering[4]. These digital innovations enabled Netflix’s new supply chain to deliver its content at quality levels similar to traditional cable distribution, but at a much lower price point due to the resulting business model changes this enabled. Traditionally, content creators (e.g., the NFL, Warner Bros. Studios) sold their content to TV networks (e.g., ESPN, CBS, TNT) who sold their networks to distributors (e.g., Comcast, AT&T, Dish) who in turn sold content to consumers. Content creators, TV networks, and consumers were dependent on the distribution owned by the Comcasts of the world, and suppliers had little flexibility in terms of how to get their content to consumers. The internet, and specifically its recently higher speeds, enabled Netflix to remove the distributors and serve as an intermediary between consumers and content creators. Using the internet as its distribution system allowed Netflix to reduce its price point and also to create a far superior digital-first user experience than the traditional set-top box of a cable subscription.

Netflix has mined its more direct relationship with consumers and that data has enabled it to be highly successful in acquiring off-air content but even more so in making original content. In 2016, Netflix received 54 Emmy nominations for its original content, behind only FX and HBO[5]. Netflix’s direct relationship with customers gives it a keen understanding of what content its consumers watch. For example, when Netflix chose to buy “House of Cards”, it analyzed 30M plays per day, 4M ratings by Netflix subscribers, 3M searches, and the overlap between viewership of Kevin Spacey (lead actor) movies and those of David Fincher (executive producer)[6]. This data is orders of magnitude superior to the basic demographic data that Nielsen provides to TV networks, which is based on viewership across 40K representative households in the US and is simply broken down into demographics (women 18-34, men 35-49, etc.).

In order to sustain the growth that digitization has enabled, Netflix must continue to deliver hits but take up steadily less bandwidth. In terms of content, Netflix is spending heavily at $3.2B in 2015, much higher than HBO’s $2.0B. By mining its data on millions of subscribers Netflix must  come up with hit programs that create exclusivity, especially as Amazon Prime gets more serious about video by doubling its content spend in the second half of 2016 compared to the prior year[7]. Netflix must also optimize its streaming methods as it offers more 4K content (extremely high quality picture) and internet service providers continue to increase prices for higher bandwidth packages. With the right content and digital strategy, Netflix should be able to continue to eat the traditional cable industry’s collective lunch.

Are we approaching the end of management consulting?