Incidents of police killing unarmed people of color have made national headlines, leading to the formation of the Black Lives Matter movement. The magnitude of these incidents have been heightened by pictures and videos shared on social media. Yet despite the public’s interest in this topic, until recently little good data was available to study the prevalence of police violence in America. Over the past couple years there has been a renewed focus on data and technology that aims to educate, provide transparency, and even warn about potential police abuses in the United States.

The model that was supposed to establish a reporting program for data quantifying the occurrence of police violence against civilians was established in the 1990s. The Violent Crime Control and Law Enforcement Act of 1994 (“Crime Act”) mandated that the Justice Department gather data about the “use of excessive force by law enforcement officers” and include it in an annual report made public.[i] The method in which the Justice Department was to collect data and the factors they would comprise, however, were not stated in the Crime Act.[ii] Due to this ambiguity (and other political factors) this report has not been consistently issued.[iii]

One of the main problems in publishing this data is that the responsibility for collecting it is split among local departments. There are approximately 18,000 law enforcement agencies throughout the country, most of which contain fewer than 25 officers.[iv] Furthermore, to the extent a department does have the resources to report such data, there is no standard methodology or required inputs that the Justice Department requires. Factors such as the race of the victim, the circumstances in which an incident occurred, and the level of force are not always recorded.[v]

Non-governmental groups including media outlets in recent years have attempted to supplement this model by aggregating both public and private data on police violence: 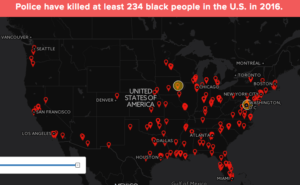 www.mappingpoliceviolence.com attempts to aggregate data from a variety of sources 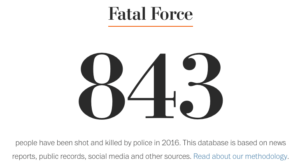 The Washington Post (left) and the Guardian (right) show different numbers of police killings in 2016.

While the efforts of these organizations have helped, there is still a public need for accurate statistics. Trying to enhance the broken model established in the Crime Act, the Obama Administration launched the Task Force on 21st Century Policing, leading to the Police Data Initiative (“PDI”).[xi] The PDI will use technology and enhanced data gathering techniques to increase transparency into policing across the nation. Furthermore, and perhaps more importantly, the PDI aims to establish an “early warning system to identify problems, increase internal accountability, and decrease inappropriate use of force.” Some of the goals of the PDI include: 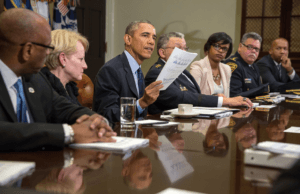 Unfortunately, while the PDI is a good step in fixing the current model of reporting and publishing statistics on police violence against civilians, it is not yet sufficient. Because it was launched through a task force and not by an act of Congress, there is no assurance it will continue through future administrations. A congressional attempt to help with this known as the PRIDE Act has been stalled in committee for over a year and would just shift the burden for reporting data to the states.[xiv]

It is a shame that in a world of data, statistics on how often people of color are killed by police are not easily found. Digital technology from the PDI and work by non-governmental organizations are good starts, but without full federal support, they face challenges in accessibility and accuracy. With the current state of congressional gridlock, it does not seem likely to be fixed anytime soon.

[v] http://fivethirtyeight.com/datalab/podcast-we-still-rely-on-volunteers-to-tally-the-victims-of-police-violence/ (and the associated podcast).

Student comments on How Many People Are Killed by Police?