With oil prices dropping and cost of carbon emission on the rise, the future of ExxonMobil looks bleaker than ever.1

While current day cost of emitting carbon are hovering around $10 per ton CO2, most forecasts are estimating that cost to double by 2030.2 In addition to government taxation, the future social cost of current CO2 emissions is estimated at a whopping $220 per ton.3 ExxonMobil is responsible for emitting roughly 900M tons of CO2 per year. By that measure, their emissions place a social burden equivalent to $200B per year.

Something must change. ExxonMobil says it has a strategy. But, is it enough?

The company states on their website that “ExxonMobil is taking action by reducing greenhouse gas emissions in its operations, helping consumers reduce their emissions, supporting research that leads to technology breakthroughs and participating in constructive dialogue on policy options”.4 However, operations do not compensate for downstream oil consumption, and supporting consumers is not the same as implementing change. The core problem lies in the dependency on oil, and humanity cannot afford to gamble on the hope that a technology breakthrough will allow us to burn fuel without consequences.

Looking behind the scenes, ExxonMobil’s big bet is that governments are not going to impose the actual cost of emission, because that would be too great a burden on the economy. Their internal report on managing the risk of relying on carbon produced energy states that “it is difficult to envision governments choosing this path in light of the negative implications for economic growth and prosperity that such a course poses”.5 Should they be wrong, and the carbon emission tax credits rise to a projected $30 per ton CO2 in 2030, then all of ExxonMobil’s profit margins will vanish.

By relying on oil, ExxonMobil has cornered itself in a battle against future governments. But fortunately, there is a way out. In the next 20 years, the company can build 228,000 wind turbines and generate alternative energy output equivalent to that of their oil production. By doing so, they would not only set themselves up for a carbonless future, but also generate $45B in yearly revenue from electricity sales.

How does it work? ExxonMobil creates a fully-owned spinoff responsible for mass production and setup up of 1.92 MW wind turbines. Every year, the company sets aside $9,519M or 28% of earnings to finance the investment. With a typical debt to equity ratio of 1.3, the spinoff can then install $21,893M worth of turbines, or 11,403 units, per year. Each turbine produces energy equivalent to removing 3,960 tons of CO2, so after 20 years they have wind power replacing the 900M tons of yearly CO2 emissions. See Exhibit for details.

Assuming a 90% operating margin and current day wholesale electricity prices, ExxonMobil can in 20 years become the largest alternative energy provider, with a $40B yearly operating profit. By reducing the carbon risk through diversification, the company sets itself up for survival in the future and creates a competitive advantage as the carbon crisis rallies on. With wind turbines in place, the company can then alter their current lobbying efforts and instead go for the opposite message:  Implement higher carbon taxes to save the earth, while making the transition tougher for ex-competitors. 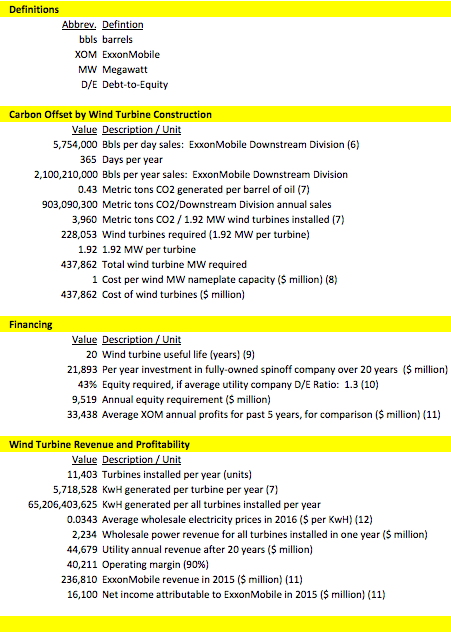 The Iconic Red Coke Bottle Tries Green On for Size

Student comments on How ExxonMobil can become carbon neutral in 20 years, and make money doing it