When I started my start-up this summer I realized I needed to store somewhere the data generated on my mobile application. I looked around my room and there was no space for a piece of hardware so I decide to store my data on the cloud. There were several companies offering cloud computing. After a quick research I bought cloud storage from Amazon Web Services simply because it offered a low price. Like many other users I wasn’t worried about my data being stored on the cloud as long as it was accessible and protected. Looking outside of the window at the clear blue sky I was wondering on which invisible cloud was my data sitting.

Behind the ‘cloud’ are the power hungry data centers that use dirty energy to store the enormous amount of data we produce. Data centers are the factories of the 21st Century. They are large buildings full of servers, usually located out of the public eye. The US hosts about 40% of the world’s data servers.[1] Data centers currently consume more than 3% of US electricity and 1.5%-2% of all global electricity, growing at a rate of 12% every year.[2] They use cheap dirty coal power to run the servers. Since the cloud makes our digital consumption invisible, we fail to recognize that all those hours spent on Facebook, Twitter, YouTube, Netflix, are destroying our environment. [3]

Even though some of the largest IT companies have started powering the data with clean, renewable energy, there are still many that fail to recognize this responsibility. Amazon Web Services (AWS) is one of them. AWS, Amazon’s cloud-computing platform, generated $2.57 billion revenue in 2015.[4] Thanks to the high margins this cloud service is the biggest source of profits for Amazon. In 2015, the profits from AWS represented 56% of Amazon’s operating income.[5] AWS largest data center is located in northern Virginia where it hosts Amazon’s own online content as well as data from countless other customers including Netflix.[6] Storing huge amounts of data consumes a lot of energy, which in the case of Amazon is powered by dirty coal.

So what actually happens when I decide to store my data on the AWS cloud? The data generated on my application is stored on one of the many servers located in the Virginia data center.  One server usually stores data from many different users. Once the machine is full the data is sent to a new server. AWS has hundreds of servers ready to serve the customers demand. To ensure that I will be able to access my data at any given time, it also gets stored on a second server called ‘Backup’. These two machines are powered by different power supplies so if one fails the other keeps operating.[7]  Because the servers are in constant use they create a lot of heat. ASW uses powerful cooling systems that maintain a suitable temperature in the room. Backing up the data, powering and cooling it requires a vast amount of energy. 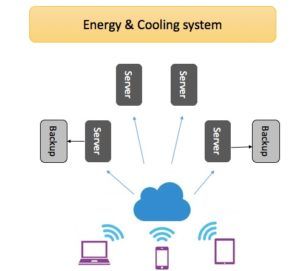 By choosing green energy companies like Amazon have the power to reduce the carbon footprint But renewable energy comes at a cost. Because green energy is expensive Amazon will have to make several decisions and trade-offs. First, they will need to decide what source of energy to use. Amazon could use wind, solar or a new innovative source of energy instead of coal. Second, Amazon has a choice to have a renewable energy source on site or purchase it directly from an external energy company. This decision depends on whether they will find the right supplier close to their sight in Virginia. Third, Amazon can decide to move its data center offshore to a cheaper location. They will have to evaluate this option carefully as relocating the data center to a developing country reduces the control of the data and increases the chance of data theft. Finally, Amazon could decide to pass the costs to us, consumers, who contribute to the energy waste by producing the ‘dirty’ data. But are we going to pay for something we thought was invisible?

The picture after paragraph 4 is own creation.

Fast Fashion on a Fast Decline via Climate Change

Tesla, Elon Musk and their strategy to revolutionize the way we consume energy

6 thoughts on “HOW DIRTY IS YOUR DATA?”