What was the TPP and what did Vietnam stand to gain?

The Trans-Pacific Partnership was a trade agreement between 12 Pacific nations,1 comprising 40% of global GDP and one-third of global trade.2 Explicitly, the agreement aimed to reduce tariff and non-tariff barriers to trade and created enforceable commitments on environmental, intellectual property and labour organisation protections for signatories. Implicitly, the TPP was a geopolitical tool in the context of the Obama Administration’s pivot to Asia to counter a growing dependence on China amongst other signatories and bring them closer to the US. Trump’s isolationist “America-first” campaign pledged to abandon the TPP to protect American workers – which he did on day one in office.3

World Bank4 and think tank5 studies predicted that Vietnam would have been the biggest relative beneficiary of the TPP in terms of:

Of all signatories, only Malaysia was close to this level of relative gain (5.6% of GDP) with all others predicted to benefit by 0.1-2.0% of GDP.6 GDP growth through greater integration in the global trade and supply chains would directly lift living standards of the Vietnamese people.

To explain the benefit qualitatively: Vietnam’s low cost labour and strategic location was beginning to attract transnational corporation (TNC) investment (such as  Samsung7 for electronic assembly, and dozens of players in apparel). The TPP would remove tariffs (such as a US tariff on imported shoes), pushing Vietnam further down the cost curve compared to neighbours, particularly China. In the short-term, Vietnam would capitalise on its ‘population dividend’ of a large, young, low-wage population to deeply embed itself in the global supply chain as a low-cost manufacturer and in the longer-term take advantage of these investments as an opportunity to move up the global value chain, e.g. by better educating its workforce and serving TNCs with supporting industries. 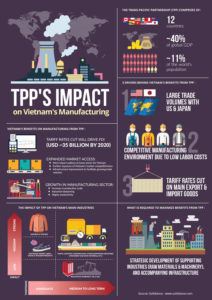 What should the Vietnamese government do now?

Absent the TPP, the Vietnamese government can:

Before proceeding, this paper notes at 11/13/2017, TPP signatory leaders are meeting at APEC to discuss a resurrected TPP without the United States.8 President Trump also visited Vietnam prior to APEC and indicated an open-ness to bilateral trade agreements. Vietnam should vigorously pursue these deals, tempered by an awareness that a mega-trend of isolationism could torpedo them again.

Over the medium-term, infrastructure investments will attract TNCs and increase Vietnam’s cost competitiveness, facilitating greater supply chain integration. One key area is ports: a World Bank report estimates “it costs US$610 per container to export from Vietnam in 2014 as opposed to US$460 from Singapore, US$590 in Hong Kong and US$525 in Malaysia”.9 Power investments are also critical – TNCs highlighted reliability and cost of electricity as key concerns in making investment decisions. For the large-scale low-cost manufacturing Vietnam is seeking to court the price advantages from these investments can deliver outsize returns when they are used to strategically attract the right firms.

Longer-term, Vietnam needs to invest in the quality of its workforce. Today it’s demographic dividend provides a young and large population that demands low wages compared to its key competitor, China.10 Longer-term, this advantage will vanish as the advantage goes downstream to countries like Myanmar. Vietnam needs to educate its workforce now so they can seize opportunities for higher value-add labour – particularly in engineering.

Vietnam should prioritise accepting and incentivising FDI that will have the greatest benefit to integrating it into the global supply chain. One way to do this is to focus on developing ‘clusters’ of related industries. This will increase the ease with which local supporting industries can serve multiple global players and allow Vietnam to have economies of scale in education and infrastructure investments. This theory was advanced by Porter as a key way for nations to secure a ‘competitive advantage’11 – and the Vietnamese government is beginning to develop an apparel industry cluster. Additionally, the government can incentivise or negotiate FDI deals that accelerate global supply chain integration – e.g. that have a mandate for technical education of a certain number of local employees.

Vietnam has limited resources and political capital. The key questions its faces are how to best use these.

(i) Given isolationist trends, which countries or regions will be the most fruitful to pursue trade deals with?

(ii) With imperfect information how can Vietnam adjudicate which levers will have the biggest impact when comparing, say, incentives for TNCs to enter versus creating engineering colleges?

How the Vietnamese government answers these questions will determine how well Vietnam can enter the global supply chain and lift living standards for its people.

Feeding the world one ugly potato at at time!

Student comments on How can Vietnam’s government integrate into global supply chains after American abandonment of the TPP?