My understanding of climate change has been heavily influenced by my upbringing in a developing country with significant natural resources at risk of being lost.  Thus, on this blog post, I would like to talk about one commodity – for which my home country is the largest worldwide producer – that has been largely impacted recently and one company that is potentially the best translation of this commodity into corporate America. I will write about coffee crops and Starbucks.

Climate change is threatening crop yields in many major coffee producing regions of the world. Higher temperatures, longer droughts, more resilient pests (associated with climate change) have significantly reduced coffee supplies over recent years. Two of the top producing countries in the world – accounting together for more than 1/3 of global coffee production – exemplify well what is happening:

Together, production decreases in Brazil and India alone could have driven down global production by almost 10%. Even more concerning, these changes do not seem to be punctual. The productivity of some important international growers is decreasing, in spite of all the recent technological advancements in the field of agriculture. Let’s take the Brazilian example: [Chart 1] clearly shows the continuous declines in productivity since 2012, even if local growers have heavily invested in technology. Reduced productivity can impact directly the international prices of coffee as well as the availability of high-quality varieties. 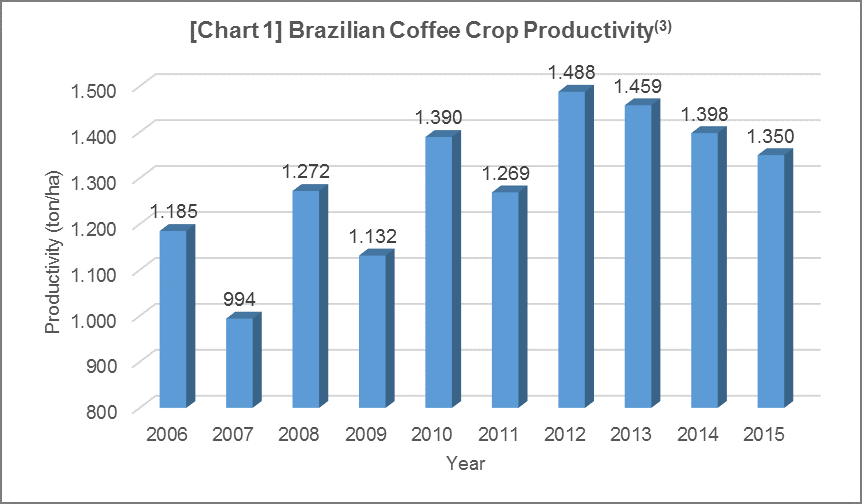 Much has been done recently to understand better the impacts of climate change on coffee crops – from academia, growers and organizations as well as relevant private players in the coffee value chain. Truth is that many companies have operational models heavily dependent on this commodity. One of such companies is Starbucks – a corporate giant with USD 19 billion revenues in 2015(4). As anyone who has been to a Starbucks store is aware, their business is heavily reliant on selling coffee – and, more importantly, high-quality coffee. Nowadays, Starbucks does not only make money with their coffee stores and the lattes their baristas prepare, but also by selling branded coffee through various retail channels (e.g., super markets, grocery stores). Given their dual nature of being a food service company and a CPG company – with a strong focus on quality and one anchor commodity – Starbucks is heavily susceptible to two potential effects of climate change on coffee crops: significant decreases on quality as well as reduced productivity in large producers (and consequently increase in prices). As the figure below, extracted from Starbucks site, clearly reveals, the company is aware of these risks and has acted to address the problem.

Since 2004, Starbucks has been implementing a climate change strategy(5) based on three pillars: maximizing use of renewable energy, minimizing energy waste and spearheading climate adaptation and mitigation efforts. In addition to internal efforts to minimize their own impact (e.g., building their stores following LEED practices, installing Energy Management Systems in almost 4,000 stores), Starbucks has worked side-by-side with Conservation International to implement climate-smart agricultural practices across several coffee growers, helping them adhere to better standards on energy conservation and driving reduced emissions. The company has also led several initiatives to spread progressive climate change policies across public entities, governments and other private players.

Even though Starbucks has been an active player on the climate change arena, I believe there is room for more targeted and actionable initiatives. Two specific examples:

Clearly, these two propositions are not easy to implement nor likely to produce short-term results.  They are long-term efforts that require focus and diligence throughout the implementation. However, I think many companies – including Starbucks – should take a more proactive approach to solve a problem that is not only likely to disrupt their business models, but also largely affects society. (795 words)

How Should Harvard University Lead Efforts to Mitigate Climate Change

Student comments on How Can Climate Change Dramatically Change Your Mornings?