Rumors that Amazon is gearing up for a major entry into healthcare have existed almost as long as Amazon has. In 1999, Amazon acquired a 40% stake in DrugStore.com [2], but shut down the operation a few years later [3]. Recently, Amazon insiders leaked that “for the last few years, Amazon has held at least one annual meeting… to discuss whether it should enter the US pharmacy business” [4]. Outside the US, Amazon recently teamed up with Japanese pharmacy chains Cocokara Fine Inc and Matsumotokiyoshi Holdings to provide home delivery of prescription drugs [5].

The interest is warranted. Total US gross spending on prescription pharmaceuticals in 2016 was $560B, with $135B captured by the supply chain. 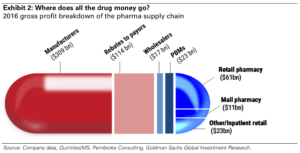 Personal health data could be combined with shopping patterns to identify an individual as at-risk for an illness. If the condition worsened and the individual needed to see a doctor, an appointment could be scheduled via a virtual personal assistant, during which, the doctor could order a prescription using voice commands, and two hours later the medication could be delivered to the patient’s door. [7]

The connecting thread throughout this hypothetical is transparency. Discussed within the broader vision for digitized supply chains, Stefan Shrauf of PWC writes “transparency enables companies not just to react to disruptions in demand but to anticipate them, modeling the network, and adjusting supply immediately as conditions change.” [8] If Amazon built a system in which some or all of its 80M Amazon Prime subscribers [6] were refilling prescriptions through a singular shopping portal, Amazon would establish unprecedented access to customer behaviors, pre- and post-purchase, upon which to run analytics and develop a proactive, predictive and flexible supply chain from storage center to customer. If the company paired that with telemedicine and brick-and-mortar pharmacy run through its new Whole Foods locations, it could limit the extent of behavioral change required by its consumers.

But it will require substantial change from consumers. In 2016, only 12% of prescriptions were delivered through mail, and that figure is declining [6]. The decline is primarily due to cost matching from brick-and-mortar pharmacies [9]. Without a cost advantage, patients are opting for the comfort of interacting with their pharmacist, over the convenience of home delivery.

According to a 2017 study by Wells Fargo, over 50% of those polled are interested in refilling prescriptions through an Amazon digital pharmacy [10]. But how much of that rests on the promise of lower co-pays? Consider the demographics: 73% of prescriptions are filled by patients 45 and older [11]. Is that contingent more likely to be converted by digitized purchasing interfaces or lower costs? I would argue for the latter.

Which brings me to a final question: can Amazon substantially reduce cost to consumers without playing in the upstream?

Goldman Sachs argues that Amazon can reduce cost-to-consumer by owning formularies and promoting generic alternatives [6]. McKinsey, alternatively, sees the key to cost reduction in whole-scale refinement of the supply chain, squeezing margins for intermediaries and reducing manufacturer’s profits [12]. There are merits to both arguments. But if McKinsey is correct, and the holy grail to cost reduction lies upstream, I believe Amazon has a tough road ahead.

Upstream, digitization is the only advantage and a limited one.

Downstream, scale is an advantage for Amazon. Top players CVS and Walgreens own only 41% of the total market [6]. Wholesale, on the other hand, is both huge and consolidated: the top 3 players capture 88% of distribution [6]. They supply not only pharmaceuticals, but medical supplies and devices, and serve both retail pharmacies and hospitals. This scale allows wholesalers to overcome razor-thin margins – less than 2% on average [7]. For Amazon, scale would be required, but it wouldn’t differentiate.

This leaves digitization as the key differentiation on which to compete. But in the context of upstream pharmaceutical supply chain, there are limitations.

Transparency: HIPAA patient information confidentiality restrictions would limit the ability to see consumption data for individual patients unless the pharmacist was under the Amazon umbrella or the patient gave explicit permission [7].

Warehouse Automation: storage and transport of prescription drugs is highly regulated and scrutinized by the FDA. As a result, experimentation is highly limited and time to market with any change to operation is extremely slow [12].

[4] CNBC, 2017. “Amazon is Hiring People to Break into the Multibillion-Dollar Pharmacy Market” Link

[6] Goldman Sachs, 2017. “If Healthcare is Amazon’s Next Frontier, Partnership May Be What the Dr. Ordered”

[9] National Community Pharmacists Association (NCPA), 2013. “A Comparison of the Costs of Dispensing Prescriptions through Retail and Mail Order Pharmacies” Link

[10] The Street, 2017. “Why Amazon May Want to Crush Walgreens and CVS By Selling Prescription Drugs” Link

6 thoughts on “How Big is Amazon’s Opportunity in Healthcare?”