You may be familiar with the famed Arabica bean—the fruit that when picked, roasted, and brewed, lifts people around the world out of bed and carries them through their days.  An astounding 2.25 Billion cups of coffee are consumed every year globally. [1] The Arabica bean, along with its coffee bean siblings, is in danger as temperatures around the world continue to rise in the “Bean Belt.”  Starbucks, the world’s biggest coffee seller, stands to lose the most. [2]

A recent report by the International Center for Tropical Agriculture indicates that if the global warming trend continues, 80 percent of lands in parts of Brazil and Central America where Arabica is grown will no longer be suitable by 2050.  Over this same period, a global decline in suitable land is estimated at about 50%. [3] A recent study indicates that significant attention should be paid to the coffee growing regions of Brazil, Colombia, Costa Rica, Ethiopia, Tanzania and Kenya.  Time series analyses have pointed to significant warming trends in these areas. [4] 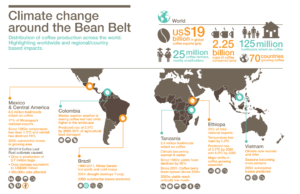 Additionally, warmer weather means increases in the prevalence of diseases such as coffee rust and pests resulting in further declines in coffee yields.  A 2011 report estimated hundreds of millions of dollars in losses of coffee beans just due to one pest: the coffee berry borer. [5]

What does this mean for coffee growers around the world?  As yields decline, there will be tighter supply and subsequently higher prices for producers of coffee as well as the end consumer.  This phenomenon has already been seen with brands including Maxwell House, Yuban, and Folgers as they have increased retail prices of certain products by 25%+ between 2010 and 2011 due to wholesale price increases. [6]

What has Starbucks done to date?  Starbucks has long realized the threats to their business and their role as a major organization in contributing to global climate change.  Since 2004, they have focused on aiding coffee farmers adapt growing practices to climate change and reducing their own emissions and impact on the environment.

For farmers, Starbucks has worked with Conservation International to “include climate-smart agricultural practices as part of their Coffee and Farmer Equity Practices.”  [7] Starbucks spokeswoman Haley Drage stated, “We believe that with the proper vigilance, as well as a long term approach, we can help farmers manage the variables that come with [climate change].”  Starbucks is also experimenting with these practices at a coffee farm they purchased in Costa Rica.  Starbucks acknowledges, however, they are far from having all the answers. [8]

Starbucks is also doing its part as a global corporation to reduce its own footprint, however, it has experienced mixed results.  They have focused on renewable energy, energy conservation, and climate adaption and mitigation efforts.  Starbucks has also built stores to LEED standards and made significant purchases in renewables.  Despite these efforts, Starbucks’ Greenhouse Gas Emissions have actually increased between 2013 and 2015.  Starbucks cites strategic initiatives as the true underlying cause of this increase.  For example, they have experienced net store growth over this period and have introduced heated foods to their menu, resulting in additional emissions from the ovens and refrigerators needed to deliver this new product segment. [7] 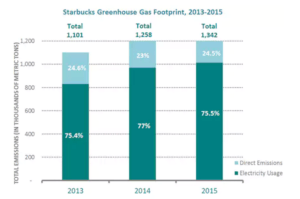 Starbucks is still far from a true solution in spite of the efforts they have made.  As a large global company, they may need to make more significant investments in research of climate adapted growing practices to expedite the discovery of solutions to reverse the falling crop yield trend.  As the largest player, they may be the only ones with enough resources to help find a solution in the near-term.

Additionally, as a result of Starbucks’ growing emissions, they may need to do more than look within their own business model to reduce their environmental footprint.  A growing company and increasing emissions likely requires Starbucks to explore other offsetting measures whether that includes purchasing carbon credits or investing in measures to promote more biodiversity in the “Bean Belt.”

It will take more than a few million tall, sugar-free iced lattes to turn the tide for the coffee industry and set Starbucks up for continued success.

When your product is dependent on snow, how do you react to climate change? A look at Vail Resorts.

Student comments on Hope you take your coffee hot