Cocoa, the world’s most stubborn tree –

According to the World Cocoa Foundation, the Cocoa tree (which grows the cocoa bean) can only grow in very specific environments, typically humid, rainy tropic areas found within only a tiny 5-degree latitude range on earth.  About 70% of world production comes from West Africa, and 1/3 of world production comes from The Ivory Coast.[i]  The rest of cocoa production comes primarily from South America and the Philippines.  The top producing countries are also some of the poorest in the world.  In Ivory Coast and Ghana (world #2 producer), 46% and 24%[ii][iii] of the populations are below the poverty line, and ease of doing business is 142 and 102 (out of 190)[iv][v].  In addition, both of these countries are very likely to be massively affected by climate change over the next 30-40 years.  According to Peter Läderach’s 2013 paper on the effects of climate change in these two countries, rainfall will increase insignificantly by 2050, while temperatures will rise by a full 2.0 degrees Celsius.  The increase in temperature will reduce humidity and increase the likelihood of droughts.  As a result, land suitable for cocoa production will decrease drastically (See figure below).[vi] 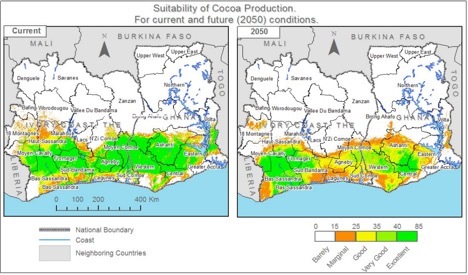 As one of the largest buyers of Cocoa, Hershey’s has begun to, and needs to continue to take drastic action to create sustainable practices in these countries, and attempt to mitigate the effects of global warming, through a combination of agricultural innovation, structural investments and sustainability initiatives.

The cocoa tree is a notoriously slow grower, highly susceptible to disease, and extremely hard to grow outside its very limited biome.  While conventional hybrid breeding has been prevalent in the industry for years, led by Trinidad’s Cocoa Research Center, to date there has been no attempt to create a GMO cocoa tree that could hopefully leapfrog all current breed’s in their ability to survive and flourish in the future.[vii] Innovation in this area might not seem politically feasible today due to the EU ban on GMO crops, however Hershey’s sponsored the sequencing of the cocoa genome in 2010 with results published in nature.[viii] In the United States, Hershey’s primary market, GMOs are far less of a concern, so hopefully high yield, disease and drought resistant GMO cocoa trees can be grown by Hershey’s suppliers and ensure the survival of affordable chocolate for years to come.

Hershey’s is currently also on the ground in The Ivory Coast and Ghana teaching their suppliers how to best grow and maintain their farms with the latest science and techniques.  Hershey’s “Learn to Grow” program which is part of the overall “CocaoAction” program, is helping farmers in Ivory Coast replant old inferior cocoa trees with the best hybrids, teaching them methods for maximizing yields and helping them make the most out of fertilizers and other materials.[ix]  This program has a joint effect of maximizing yields for Hershey’s today and into the future and at the same time helps the farmers make a better living. Hershey’s needs to continue these programs, and drive GMO or new hybrid breeds that will better adapt to changing climate conditions.

Hershey’s has been a contributor to global warming in the past, however they have made major strides over the past few years to enact change in their sustainability practices.  Hershey’s signed a commitment in 2014 to purchase 100% of its palm oil from sustainable sources, rather than palm oil created from deforestation.[x]  In addition, they enacted aggressive recycling policies, built a LEED Gold factory in their headquarters town of Hershey, PA, and committed to reduce their greenhouse gas emissions by 50% between 2009 and 2025.[xi]  Overall, these changes only make the smallest dent in overall greenhouse gas emissions, it signals that Hershey’s is ready to fight against human made climate change, for their own sake and for the planet’s.

For Hershey’s, climate change is fairly inevitable, however the aggressiveness in which they respond to the challenge is so important, because after all, there is no substitute for chocolate.

Imagine a World Without Coffee…