US healthcare reform: An opportunity for digitization

In 2008, healthcare spend in the United States was estimated at $3.2 trillion, higher than the spend in “Japan, Germany, France, China, the U.K., Italy, Canada, Brazil, Spain and Australia combined.”[1] In response, the Obama administration launched a healthcare reform with two main goals: Increase access to and quality of care, and reduce healthcare cost. One component of the reform was improving information-sharing across providers. This is where Electronic Health Records (EHRs)– a digitized version of a patient’s paper chart – came into play. The government invested $40 Billion in IT and provided financial incentives as well as penalized for failing to move to electronic records by 2016[2] (see Exhibit 1 for roll-out volumes). 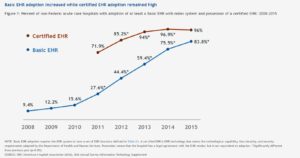 However, EHRs required new IT platforms, which is where Allscripts saw its opportunity. Prior to 2007, Allscripts provided practice management tools to healthcare providers[4]. When the government mandated EHRs, Allscripts made a strategic move into the digital space to support providers in a timely implementation of the government mandate. Since then, Allscripts has become a major player in the digital world of healthcare, providing an entire suite of digital services (e.g., EHRs, financial management), ranking amongst the top providers of EHR software[3] and engaging 7.2 million patients on their EHR platform.[4]

The situation outlined above presents a unique example of the dynamics of digitization at play: The government mandated providers to move to EHRs as part of the healthcare reform. Yet, providers lacked the necessary IT infrastructure to do so. This created an opportunity for private companies in the field to focus on EHR platforms, and thus partner with healthcare providers in this process of digitization.

At this point, it is worth examining how the digitization of health records adds value across the healthcare value chain:

This may sound like a win-win situation…yet, challenges are looming:

Allscripts to the rescue: How can Allscripts –in its market leader position –improve the experience?

US healthcare- A long road to more efficiency

The healthcare industry is faced with significant challenges and is undergoing major transformation. Technology and digitization will play a critical role in improving efficiencies. EHRs are one example of technology impacting healthcare, and it remains to be seen how the industry will leverage technology to transform over the next few years. 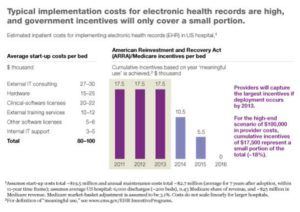 Athenahealth: The Quest to Unbreak Healthcare