In 2015, Jakarta, Indonesia topped the list of the world’s worst traffic. Problems with congestion are nothing new for the nation’s capital – the city has suffered from frequent gridlock ever since the nation’s founding president, Sukarno, paved over the city’s tracks with asphalt (the tracks were seen as an unwanted remnant from Dutch-era colonialism) [1,2].  Since that time, traffic has caused a number of logistical and economic problems for the city. In fact, studies show traffic jams create upwards of Rp 65 trillion (US$5 billion) in losses each year [3].

Enter Nadiem Makarim (HBS 2011). During business school, the Indonesian native recalled the troubling, 3-4 hour commutes that he would often endure in and around the city. When Nadiem wanted to cut traffic time substantially, his best option was to take a motorcycle taxi, called an “ojek.” These two-wheelers are the preferred form of travel throughout the entire nation, and were particularly desirable in Jakarta, where the ability to weave in and out of traffic could safe hours. The services are so popular that there are more motorcycle taxis in Jakarta than taxis [4].

Nadiem reasoned that the current ojek market, while ubiquitous, was plagued by three main problems. First, ojek supply and demand were nearly impossible to match – not only because customers often had no idea where drivers sat idly parked, but also because drivers had little information about where and when passenger demand was highest. Second, there was extremely high idle time for drivers – according to later studies conducted by Makarim, 75% of an ojek driver’s time was spent waiting with large crowds of fellow ojek drivers, taking turns driving passengers on an “honor system.” Third, many riders expressed a sense of mistrust of ojek drivers. Numerous instances of “bait and switch” pricing had been reported. Driver credibility was often impossible to establish, as was price fairness and general safety [4].

The solution to this problem was a “mobile app with a social mission” [5]. GoJek (which was first prototyped at HBS) connects reliable ojek drivers with a network of users. These users can request drivers not only for transport, but also for courier and delivery services.  At its core, this operating model is similar to most other ride-sharing apps– a robust technology platform connects pre-screened drivers with passengers in a manner that best matches supply and demand, leads to better price transparency, and recognizes synergies through the network effect. However, GoJek deserves special recognition for two main reasons – the first is that his is one of the two ride-sharing apps on two wheels – in Indonesia’s congested cities, two wheels are simply faster than four.  Second, there are even fewer two-wheeled ride-sharing apps that are based in Indonesia. In a country with lots of national pride, this fact is particularly important, and is something that Makarim has leveraged in numerous marketing pitches [4,5].

As a business model, these efficiencies led to genuine value creation. Perhaps the most significant example is the increase in women passengers. While many women reported that they were previously wary of motorcycle taxis due to trust issues surrounding price and driver behavior, GoJek offered a more ‘official,’ legitimized option. In this sense, GoJek did not need to steal customers from competitors to recognize value – instead, it created demand where none previously existed [3]. 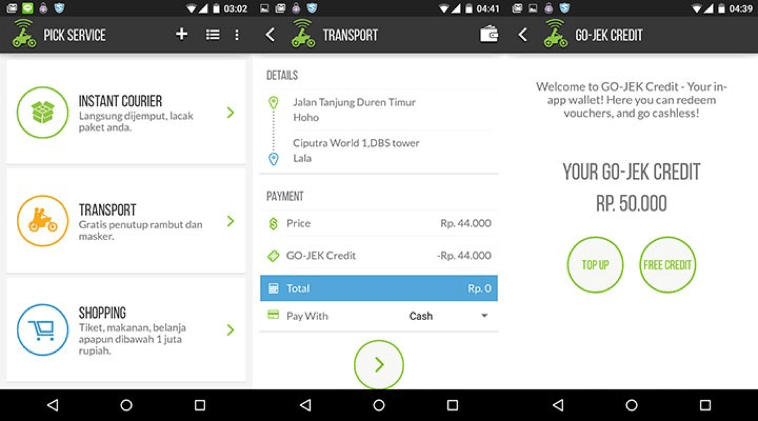 Competition:  This is the primary challenge GoJek faces moving forward. While the mode of transportation certainly differentiates GoJek from Uber, the technology platform does not. Domestic competition is heavy as well – competitor companies like Grab Bike (started by Nadiem’s close friend at HBS, Anthony Tan) have made it difficult for Go-Jek to maintain a consistently competitive market share [6].

Pushback from traditional “ojeks” and leading taxi companies: Since GoJek’s inception, reports have emerged about bad blood between ojek ‘loyalists’ and traditional taxi services on one side and GoJek ‘converts’ on the other. Street protests against ride-sharing apps have grown common, and occasionally, things have turned violent. However, in May 2016, GoJek announced a strategic partnership with the nation’s largest taxi company (BlueBird), suggesting that new synergies are possible [7]. 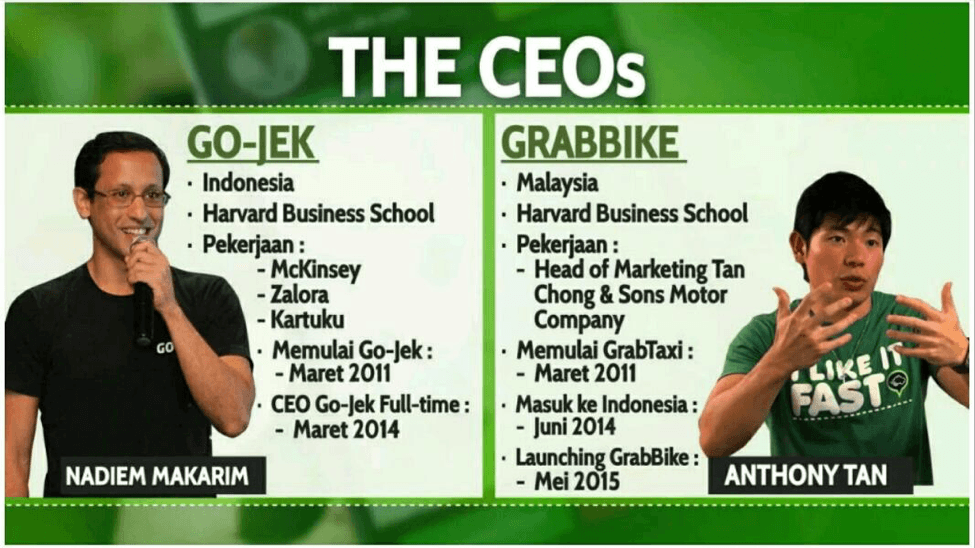 A Step in the Right Direction

Armed with an operational model that creates real value and a brand that is uniquely “Indonesian,” Makarim’s GoJek looks determined to win the battle his government cannot. And although adding motorcycles to the road is far from the long-term, infrastructure-based solution the country needs, one cannot deny the incredible cost and time savings that this simple ride sharing app has gifted Jakarta in its short lifetime.

Oh Deere! Plowing Ahead Into the Future