HBO, the television cable network owned by Time Warner Inc., has been one of the most valuable and profitable media assets in the industry with some estimating its value at more than $20 billion. In 2015, HBO generated more than $4.0 billion in revenue and $1.0 billion in profit with the majority of its revenue coming from 30+ million paid TV subscribers, each paying between $15 and $20 per month. Once seen as the one of the most stable assets in media with top quality programming, HBO’s traditional revenue model has come under pressure in recent years. This pressure has come from a growing number of US households “cutting the cord” from cable and relying on Over the Top Content Providers (“OTT”) for daily viewing entertainment. Pay TV subscribers have declined from a high of nearly 102 million in 2013 to less than 98 million today as the proliferation of digital technology has enabled OTT players like Netflix, Amazon, and Hulu to attract consumers away from spending more than $100 per month in cable bills to less than $20 (a Netflix basic streaming plan costs $7.99 per month).

As technology developed in the early 2000s, rumors developed over the advent of internet television that would put traditional cable television out of business. Under this landscape, HBO saw how technology could disrupt its business model and started to develop a supplemental business and operating model that could provide it with alternative revenue streams. With the establishment of Netflix streaming in 2007 and Hulu in 2008, HBO and other cable providers were forced to respond by providing its own content over the internet. HBO’s response came in 2010 with HBO Go where subscribers could watch HBO On Demand content over the internet.

At a high level the business model behind HBO Go was simple: become agnostic to what platform consumers viewed content and focus only on allowing consumers to view content any time and anywhere. The operating model, in terms of what HBO was going to charge and who was going to be able to use it, was much more complex for two primary reasons. HBO’s traditional business generated most revenue from subscription fees, of which it had to give away 50% to the cable providers who in turn took care of the hosting costs required to get programming into a household’s television set. These cable providers relied on HBO for nearly $3.0 billion in annual revenue ($4.0 billion if you include HBO’s brother company Cinemax). At the same time HBO’s parent company received more than $5 billion in affiliate fees (fees paid from cable providers to free television networks like TNT, TBS, etc…). As a result of these relationships, HBO had to consider how its decisions to protect itself from other OTT threats would impair its own and that of its parent’s relationships with the cable providers. Upon launch in 2010, HBO decided to only offer HBO Go to paying traditional subscribers so as to not upset the balance with the traditional cable providers. In March of 2015, though, as HBO continued to face mounting competition from OTT providers and internet television providers (Roku, Sling TV), forcing subscriber numbers to decline, HBO introduced HBO Now, whereby consumers could pay to watch HBO over the internet without having a subscription to cable television. Cable providers were reportedly unhappy with HBO’s decision but it is not yet clear how that will impact HBO in the future. 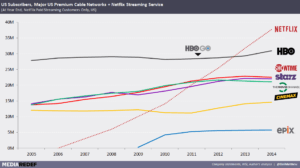 HBO did a great job recognizing the shifting trends in the traditional cable industry, but it has not done enough to fend off the increasing OTT competition. While the Company recognized the digital transformation taking shape in its industry, it took more than a decade for it to implement a proper operating plan to fend off the competition (HBO Now), which could be one reason that it has only attracted 1 million US subscribers compared to the more than 40 million US subscribers that Netflix has. At the same time at $14.99 per month, HBO Now is nearly double the cost of Netflix but today Netflix offers more original programming than HBO (600 hours while HBO has plans to increase to 600 hours in the future). HBO needs to do three things to address its issues: 1) introduce a tiered pricing strategy to compete with Netflix and Amazon Prime (which costs $10.99 per month) 2) increase spending on programming to ensure it maintains its reputation as the highest quality provider of content (in 2016 HBO won 22 Emmy’s compared to 9 for Netflix and 6 for Amazon but in 2013 neither OTT won any) 3) Start offering children programming on HBO Now to ensure it can be a one-stop shop for all ages similar to Netflix and Amazon. (791 words)

US Media: Content at a Crossroads (Barclays, Kannan Venkateshwar, July 2014)

Otto Automation: A future of cost-efficient productivity or the death of the blue collar worker?

Student comments on HBO: How Over the Top Content Providers (Netflix, Amazon, Hulu) Have Forced HBO to Transform its Business Model