Investment banking is a relationship business. But does it have to be? Goldman’s trading business has already been disrupted, through a combination of regulation and technology. Revenues for proprietary trading have fallen from $25 bn in 2009 to $18bn in 2010 to $5bn in 2015.[1] The number of employees who trade shares of equities have fallen from a peak of 600 people in 2000 to only two people today.[2] 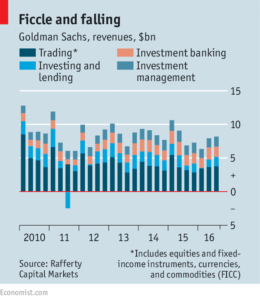 This is in large part due to the Dodd-Frank rule requiring banks to hold large amounts of capital on their balances sheets against risky trade. But it is also because equity markets trade on exchanges, so the trading can be automated, allowing Goldman to digitize its operating model.

Goldman is embracing technology in many new ways, allowing it to provide more value to its customers both through improving the efficiency of its own employees and through expanding into new business lines. Goldman is a partial owner of Symphony, an online messaging system built to rival Bloomberg. Use of Symphony makes Goldman less reliant on Bloomberg as a third party. Symphony, while not yet widely in use, plans to sell its services to a large number of banks and other firms, giving Goldman a new, technology-focused business line.[3] Goldman also has launched an online lender, Marcus, this fall. Marcus offers small balance consumer loans, a business and customer segment Goldman has traditionally avoided.[4] With an online platform, Goldman can execute to reach the masses. They plan to offer similar loans to that of Prosper and Lending Club. A few years ago, it was unthinkable to get a loan online. This type of consumer went to his local bank – or, depending on his credit score, his local loan shark. Prosper and Lending Club created a new market to allow investors – who can be average people, though institutional investors are involved – to fund loans to borrowers in need, at rates often better than they could get elsewhere. Unlike Prosper and Lending Club, Marucs isn’t a lending platform bringing together investors and lenders – Goldman Sachs is providing the capital for each loan.[5]

Despite these changes in ancillary businesses, Goldman has not yet taken steps to revolutionize – and digitize – its traditional core business of investment banking. Goldman bankers cultivate relationships with corporate firms and investors for years and charge high prices for their advisory services. Goldman wins business because of its specialized knowledge – banking is the only channel for IPOs or advice for M&A transactions, a small collection of banks have the best relationships, banks can use their balance sheets for IPOs, and there is a lack or price and transaction transparency for certain types of transactions[6] (for example credit trading, which has not been disintermediated to the same extent as equity). However, smaller players are starting to nip at Goldman’s heels and attempt to break through these barriers to entry with technology. DealNexus, which is owned by Intralinks, connects those wishing to sell their businesses with those wishing to buy, usually lower middle market private equity firms and family offices. While the transactions have been small to date, the threat remains that the banks may be cut out. Goldman needs to protect itself from the threats from competitors embracing the digital world. I think it should do this by owning the entire market. It should be willing to sell some of its data, as DealNexus does. This way, Goldman can handle high transaction volume with fewer people servicing this type of transaction. That said, it needs to avoid clients trading down from full-scale advisory services. In those instances, Goldman needs to make sure they really add differentiated value, rather than only take advantage of asymmetric information. [Word Count: 682].

[5] The New York Times. “Goldman Sachs Online Lender, Marcus, Opens (to Those With the Code).” http://www.nytimes.com/2016/10/14/business/dealbook/goldmans-online-lender-marcus-opens-to-those-with-the-code.html

Digitalization in Microfinance in U.S.