Going once, going twice… SOLD! Art auctions are synonymous with red velvet ropes, infamous auctioneer podiums, and gilded posh auction rooms full of beautiful artwork.  Can this truly be a thing of the past?  In recent years, technology has disrupted, and ultimately been incorporated into, the art auction business at Sotheby’s.

Painting a picture of Sotheby’s operations 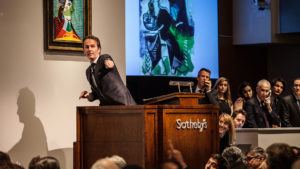 Sotheby’s is one of the two largest premier auction houses in the world, rivaled only by Christie’s.  Founded in London in 1744, it served as the hallmark of art auctions catered to the privileged class for the better part of three decades.  To give a sense for how intertwined “tradition” is with Sotheby’s, just consider that Sotheby’s is the oldest company traded on the NYSE.  Auctions are typically held twice a year, exclusively in New York, but buyers can be geographically located anywhere so long as an in-person representative is present in the room [1].

An example of traditional operations is:

Notably, this is how auctions have been held (with minor tweaks) for decades.

The Landscape: Bold Strokes on a White Canvas

With the advent of technology and the dominating presence of e-commerce, it was only a matter of time before online art auctions would catch on.  Companies such as Paddle8, Artsy, and Auctionata have opened up the once cliquish art world to the masses and provided additional transparency on pricing.  Just last year, online art auctions made up 6% of all art sales, which was a 32% increase from the previous year [2].  No wonder it was only a matter of time before Sotheby’s jumped on the bandwagon.  New initiatives by Sotheby’s in response to technology have risen rapidly since 2004 [3]. 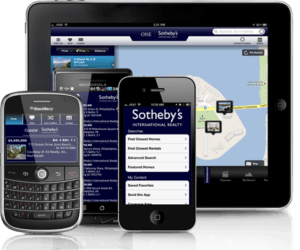 As Sotheby’s continues to push forward, there remains a couple things that could be implemented:

Overall, while the traditional art auction will probably never go away completely, the world of art is slowly being digitalized.  For such a historically unaltered operation, the last few years of technological advancement has jolted big change. Get onboard before it’s gone!

On Dating Apps & Demographics: The Heart Wants What I.T. Wants?

Student comments on Going Once… Going Twice… Sold to Technology!