Go ahead – reach for that Snickers. You’re helping mitigate the impact of climate change and promote more sustainable resource use. Over the past decade, Mars Inc. – a $30B+ confectionary manufacturer – has emerged as an industry leader in responding to the risks that climate change poses to its business and operating models.

Along each step of its supply chain, Mars faces direct and indirect challenges that stem from climate change: 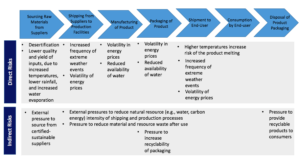 Specifically, Mars faces the greatest risk from climate change to its raw materials. Let’s delve into cacao and palm oil:

Mars buys 10% of all cacao grown, so any changes in the quality and quantity of global cacao supply have a profound impact on the company. More than 5M farmers grow the world’s cacao supply, and the yield of the crop is increasingly threatened by climate change. Let’s take West Africa, where Mars sources the majority of its cacao. According to research, climate models show expected increases in maximum temperatures in the “cocoa belt” of West Africa that would near the maximum temperature bearable by the cocoa plant. This is expected to occur in tandem with desertification – the natural conversion of forested, agriculturally-viable areas into savanna. Delving deeper, Mars sources most heavily from a region in Cote d’Ivoire where scientists project to see an 800% increase in land classified as “very low climatic suitability” for cacao.

In response, Mars has invested in technologies and training to improve farmers’ cacao yields. According to Kevin Rabinovitch, Global Sustainability Director at Mars, “yields of cocoa in West Africa could be tripled what they are today… The problem is getting the knowledge out to cocoa farmers.” Mars has established 17 cocoa development centers in Cote d’Ivoire to educate 20% of the country’s farmers by 2020. Moreover, Mars has invested in decoding the cacao genome, in an effort to develop more productive and drought-resistant crops. The company has made this research openly available, hoping that an open-source approach could speed industry progress.

Palm oil is another raw material for which Mars has adopted more stringent requirements. Research has shown that the production of 1 kg of palm oil corresponds with a carbon emission of about 2.8-19.7 kg CO2 – the volume equivalent of 300 – 2,000 balloons. This is because the production of palm oil has historically been facilitated by deforestation of tropical forests that hold large stores of carbon. In Indonesia and Malaysia, which produce 90% of the world’s sustainable-certified palm oil, an estimated 7M acres of rainforest has been cleared to make way for palm oil production.

Thus, in 2015 Mars converted to sourcing 100% of its palm oil from suppliers that meet requirements laid out by multi-lateral organization, Roundtable for Sustainable Palm Oil (RSPO.) The company goes beyond RSPO criteria by also requiring that suppliers do not develop palm oil on peatlands or in high carbon-stock forest areas.

Beyond raw materials, Mars has made aggressive commitments to eliminate GHG emissions from all operations by 2040, to buy 100% of cocoa, coffee, tea, fish and palm oil from suppliers certified as sustainable, and to provide consumers with a recyclable solution for all Mars drinks by 2020. In 2015, the company achieved its goal of sending 0% of manufacturing waste to landfills, and it has reduced water use by 17% over 2007 levels, by investing in rainwater harvesting system, wastewater treatment systems, and more efficient belt-washing systems within factories.

Are there still opportunities for Mars to further reduce its impact on the environment? Absolutely. Here are a few ideas:

Overall, Mars has done an exceptional job of both mitigating and adapting to climate change. As a privately-held, family-owned business, Mars has had the flexibility to make long-term investments, without the need to appeal to shareholders’ short-term expectations. From helping smallholder farmers cope with the impacts of climate change to reducing carbon emissions, Mars is a leader in environmental stewardship – surely sweet news for all the Snickers lovers out there.

Southwest Airlines Buckles in for a Bumpy Ride

Climate Change and Delta Airlines: a two-way street at 35,000 feet