People all over the world are bananas about bananas. They make the perfect breakfast companion, a healthy snack any time of the day, and a staple of many tropical countries’ diet. In fact, the word for bananas in Uganda (“matooke”) literally means food [1]. As climate change continues to impact the banana producing regions of the world, we may see a change in the availability of the fruit.

In “Climate Change and Food Systems: Global Assessment and Implications for Food Security and Trade” published by the UN, researchers from Biodiversity International analyzed how yields will change in current banana producing regions due to projected changes in rainfall and temperature.  Results of the study show that by 2070, the areas of the world suitable for banana production will increase by 50% due to higher global temperatures.  With this rise in temperature, the production cycle from planting to harvest may be shortened in some areas [2].

Despite these seemingly favorable conditions for sustained banana production, other changes due to climate change will put on a strain on banana production. The rise in temperature is expected to increase water demand by 12-15%. Many banana farmers currently produce banana as a secondary crop to coffee. The increase in temperatures and water demand makes coffee cultivation more difficult, so farmers may abandon coffee and banana cultivation together.  Perhaps the biggest challenge to banana production will be the increase in spread of pests and diseases, such as black leaf streak disease which is accelerated by increased temperatures [2]. In Latin American countries such as Honduras, where agriculture generated $2.4 billion (13% of economy) in 2014, droughts have caused a decline in banana production. Colder dry seasons due to climate change have also slowed the rate at which bananas ripen. [3] 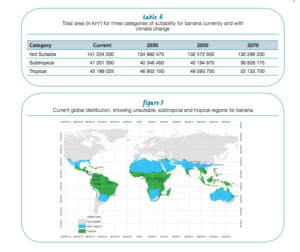 Dole Food Company is one of the largest producers of bananas worldwide. Dole bananas are grown and sourced from independent growers in Colombia, Costa Rica, Ecuador, Guatemala, and Honduras. These bananas are then sold primarily in North American, European, and Asian markets. As climate change brings challenges to the Dole’s banana and other agricultural production, Dole has taken steps to promote climate change awareness in its banana growing regions by hosting reforestation and education events [4]. In 2008, Dole evaluated the possibility of producing carbon neutral fruit in Costa Rica [5]. In 2013, Dole ran a plantation in Costa Rica that had cut water use in its processing plant by 80% and recycled plastic covers used to protect bananas in the field. However, the project is still far from reducing the entire Costa Rican banana supply chain to zero carbon emissions [6].

Looking into the future

In the next 30-50 years, Dole will need to make some fundamental changes to its supply chain in order to keep up with global banana demand. As temperatures increase, certain banana producing areas may become too hot for production. Dole will need to transition cultivation from these areas to new regions whose increased temperatures become suitable for cultivation. By 2100, the banana cultivation map globally may look very different than today’s. The most tropical areas near the equator will become too hot for cultivation, while subtropic areas will be main sources of production.In addition, Dole should use the banana crop variety as a key resource to adapting to climate change. The over 500 varieties of bananas each have slightly different optimal cultivation temperatures and water needs. Adjusting the variety grown in each area can also help maintain current production levels.  In parallel, Dole needs to work with local farmers to continue education on pest and disease control as well as best practices for water-saving irrigation techniques.

The Love-Hate Relationship between Agricultue and Climate Change