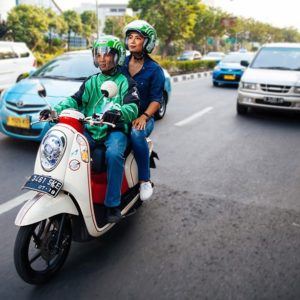 Jakartans are all too familiar with traffic jams – the Indonesian capital is home to 10 million people and is one of the most congested cities in the world. With the lack of adequate public transport systems, both the private sector and informal economy have developed their own solutions to help the city’s residents.

The motorcycle taxi or “ojek” emerged in the early 1990’s and became one of the country’s major modes of transport, as anyone with a motorcycle could situate himself outside a popular destination and offer rides for a negotiated price [1].

Gojek, an on-demand motorcycle taxi smartphone app that launched in 2010, has attempted to digitalize and disrupt this traditional business model. By formalizing an informal economy, Gojek has improved standards both for its drivers and its riders.

Through the Go-Ride service on the Gojek app, drivers now have access to real-time traffic information that they can use to identify areas with the most demand and maximize the revenue they earn. The company also provides drivers with safety training and insures them against accidents through a partnership with Allianz, allowing them greater financial security [2]. 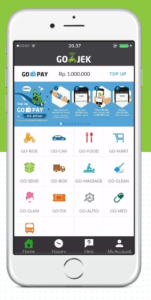 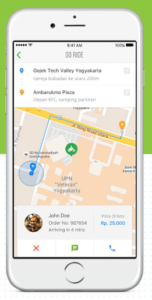 Meanwhile, customers gain from the price transparency the app offers them, as they can book rides at fixed prices without having to bargain with drivers. They no longer need to spend time explaining the route to their drivers, as the app includes a GPS function to guide drivers. Given the low rates of credit card penetration in Indonesia, the app also allows for cash payment, further contributing to the app’s ease of use [3].

Gojek is not only disrupting transport in Indonesia, but revolutionizing the larger landscape of on-demand informal services. Since its inception, the app has expanded to include 13 other features, often facilitated by Gojek drivers, such as Go-Glam (beauty services at your home), Go-Send (package delivery) and Go-Med (medicine purchase and delivery) [4].

Services such as beauty treatments, massages and cleaning have traditionally been driven by word-of-mouth marketing in Indonesia, but the Gojek app allows these entrepreneurs to gain greater visibility and expand their customer base. It allows a segment of the population that is more financially vulnerable to gain a steadier and more predictable flow of income, in line with Gojek’s guiding principle of social impact [5]. 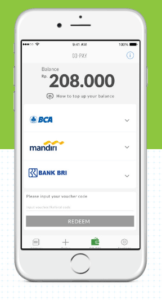 Given Gojek’s scale and prominence, there are a number of additional opportunities and initiatives the company can consider:

As credit card penetration grows in Indonesia, an increasing number of users will be able to use credit to pay for products and services online. Gojek has already ventured into payment services with its Go-Pay feature, allowing customers with credit cards to top-up their credit on the app and use it toward the on-demand services it offers. Given the large user base already using the Gojek platform, the company could consider expanding this payments offering — they could allow customers to use Go-Pay to make payments toward other (non-Gojek) products and services as well, in the same vein as PayPal or Venmo.

Indonesia is the 3rd largest smartphone market in Asia after India and China, and the number of smartphone users has been growing at 30-50% each year according to the Indonesian Cellular Phone Association [6]. Apps like Gojek both capitalize on this mobile trend and help propagate it further, as workers in the informal economy increasingly see the important role internet-enabled phones can play in generating employment and are incentivized to become more technologically literate.

However, these phones and smartphone data plans can be steep for many Indonesians looking to offer services on these apps. Gojek can consider partnering with phone and telecommunications companies to provide a credit plan or subsidy to the drivers (and other service workers) that need it. Though this might require a significant up-front investment, it would ultimately reap great dividends for phone companies, telecommunications services, Gojek and these Indonesian entrepreneurs alike. 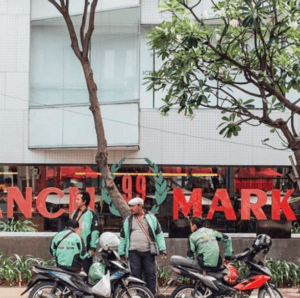 Given the large user base and GPS capabilities of Gojek, the company has access to a vast amount of data that it could analyze to identify patterns in customer routes and traffic levels around the city. The Indonesian government is currently developing Jakarta’s first mass rapid transit (MRT) rail system and Gojek could play an advisory role, perhaps in partnership with a data analytics firm, to help the government optimize their train routes and schedules based on these traffic patterns.

This might constitute a conflict of interest for Gojek — if the public MRT system is in fact successful, fewer people will need to book motorcycle rides through the Gojek app. But given the company has diversified itself to include other services and it could continue to provide rides to and from these MRT stops, it might still benefit their business and further bolster their mission to drive social impact. (795 words)