Many may argue that the most important commodity on Earth is chocolate. Mars Candy is one of the world leaders in the candy industry, with sales estimated at $33B for 2015[i]. With brands like 3 Musketeers®, Dove®, Milky Way®, Twix®, Snickers®, and M&Ms®, Mars relies on the successful production of cocoa beans to produce their chocolate. Cocoa bean production has historically been dominated by the Cote d’Ivoire (Ivory Coast), which produces more than twice the amount of cocoa beans per year than the world’s second largest producer.[ii]

Cacao is very delicate crop. It must be grown within 20° of the equator, in areas with “high temperatures, high humidity, abundant rain, nitrogen-rich soil, and protection from rind. In short, cacao trees thrive in rainforests.”[iii] Due to global warming and rising temperatures, cacao tree crops will likely need to be moved in Cote d’Ivoire from 350-800 ft to 1,500-1,600 ft above sea level in order to counteract the impacts of changing precipitation patterns which in-turn effect the necessary humidity levels to grow cacao trees. A recent study found that this change in cultivation area will negatively impact the production of cacao, as 89.5% of locations studied as possibilities for new growth were likely to have a decrease in suitability for cacao production by 2050.[iii] As the Chief Sustainability Officer for Mars has said, “most of the models will say that it’s going to get drier in West Africa, and that’s not good for cocoa.”[iv]

Beyond, just chocolate, Mars recognizes the risk that global warming can play on their entire supply chain. Due to recent droughts and increasing temperatures in California, the production of almonds has been greatly impacted, which can have downstream impacts to major Mars brands including, Snickers®. As the temperatures rise, the chill levels needed to support the growth of almonds may be put in jeopardy.[v] To help curb the potential risk to their supply chain, Mars has started to work very closely with meteorologists to help predict future impacts to supply. Using these meteorological models, Mars will be able to better predict its eventual supply needs, and therefore will be able to better determine future products and supply.[vi] 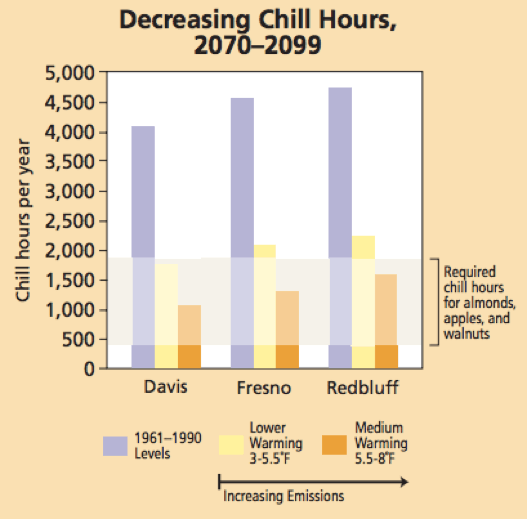 Rather than looking elsewhere for their production of cacao trees, Mars has made a concerted effort to help the suffering farmers of Cote d’Ivoire. This involves working with farmers to provide superior types of trees, fertilizer, and training. Beyond just supporting their farmers, the executives at Mars recognize that global warming is a problem that needs their corporate support as well, leading Mars to invest in a 211-megawatt wind farm in Texas, which produces enough electricity used by its US operations.[vii]

Furthermore, Mars recently partnered with 9 other global food companies (including: General Mills, Unilever, and Nestle) to lead an effort to reduce the worlds reliance on fossil fuels and reduce the impact of global warming. Mars, along with these other companies, has set a goal to remove the use of fossil fuels from their production system completely by 2040.[vii] Over the course of 2015, Mars made a number of improvements to help meet their 2040 goal. Mars had a very successful 2015 as it was able to reduce its greenhouse gas emissions by 25% in (primarily due to their wind farm in Texas) and reduce its fossil fuel use by 18.1%, just missing their goal of 25%. Mars, both domestically and abroad, is making a concerted effort to move towards renewable energy, including: the use of thermal springs in Hungary, treating wastewater anaerobically (to produce biogas as a form of renewable energy) in Poland and the Czech Republic, and using solar gardens in Nevada.[viii]

From the coast of California to the Ivory Coast, global warming is having a serious impact on Mars’ supply chain and products. One day, chocolate may not be a special treat, but more of an expensive luxury.

[vii] “MARS UNITES WITH GLOBAL FOOD COMPANIES ON CLIMATE ACTION: ‘WE CAN AND MUST DO MORE.’” Mars, Incorporated, www.mars.com/global/press-center/newsroom/mars-unites-with-global-food-companies-on-climate-action-we-can–and-must-do-m