Turning the lights on means much more than flipping a switch these days. With the growing digitization of power infrastructure, supplying electricity entails an entire ecosystem of sensors, controls, and data management systems that are increasingly inseparable from the traditional supply chain, spanning from power generation, to transmission and distribution, to the end-customer.

In part, a continuing decline in returns have prompted this move to digital. Established players in the electricity sector have seen their earnings suffer from increasing deregulation and new entrants (see Figure 1). Coal-powered generators are facing cost pressure from cheaper gas and renewable sources, while those renewables are in turn coping with wind and sun sources whose output is harder to predict than traditional “base load” generation. No surprise then that companies are attracted to the digital approach, when “going digital” has the potential to improve utility earnings by 7% in generation alone, and 20-30% across the value chain. [1] Digitization has enabled power companies to amass an incredible wealth of data, improve productivity and efficiency, and engineer more efficient and responsive technologies.

However, vulnerabilities have emerged as fast as digitization has spread across the electricity supply chain. The capabilities to collect data and act on it remotely yield new opportunities for malevolent actors to disrupt operations. In 2015, a malware called Black Energy interrupted Ukraine’s power grid by infiltrating a utility company’s systems and cutting off efforts to repair them. [2] Future attacks could put more at risk by compromising more critical communication links or targeting physical facilities directly, rather than their surrounding systems. [3] The advent of digital supply chains therefore raises growing concerns of security and stability that operators must contend with more frequently. 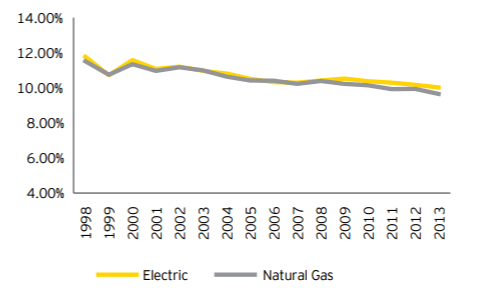 Ghosts in the generation machines

Enter equipment manufacturers, who emerge as part of the frontline in defending from digital intrusions. One notable example, General Electric is building on technologies already embedded in its power generation turbines to add defensive capabilities to their customers’ supply chains. GE used its existing Digital Twin platform to produce a defensive one called Digital Ghost. [5] A digital twin is a virtual model of a physical equipment that collects data and predicts outcomes, improving the machine’s life and performance. [6] Similarly, GE’s Digital Ghost simulates the physical machine and uses accumulated performance data to detect anomalies and correct them without human intervention.

The Digital Ghost approach follows three phases – problem detection, location, and neutralization. [7] For example, a turbine producing anomalous power fluctuations triggers the resident “ghost” system, which compares the output to benchmarks for that specific turbine. The system then isolates the problem and takes the corrective measures (e.g., shut-down, flag for human follow-up) to resolve the threat. The speed at which the turbines operate advantages a digital approach; gas turbines adjust every 40 milliseconds, exceeding the pace of human operator intervention.

GE will roll out the Digital Ghost feature in phases. [8] The first in 2018 will enable equipment to identify and locate threats. The second phase in 2019 will finalize the capability to resolve issues. The overall effort focuses on gas and steam turbines, older and more established technologies with a large body of existing performance data and benchmarks.

Looking at next moves in the medium term, GE could apply this Digital Ghost to other sub-sectors within electricity (e.g., wind turbines) as well as more extensively along the supply chain, collaborating with manufacturers of grid and other equipment. The same capabilities that currently allow systems to talk across generation, transmission, distribution, and the end-customer’s business or home could also collaborate to identify threats and coordinate responses across the supply chain. For example, an attack on grid management software could trigger that asset’s “ghost” to curtail production at the plant level, while signaling downstream storage sources to provide alternative supplies during the interruption.

Moreover, such supply chain security improvements are not limited to the power sector. GE should explore this Digital Ghost approach to other data-rich, automated, and capital-intensive activities. Aviation, oil and gas, and medical systems exemplify some other, similar spaces. [9] Critical systems in urban infrastructure or industrial processes could benefit from built-in controls that already use the stream of data to triage interventions, acting when human decision-making could lag.

Much like digital transformations overall, securing such systems is an industry changer. However, GE will face design and implementation choices before it can scale. How much should it invest in interoperability of the Digital Ghost approach with other stakeholders’ asset? How can this be scaled, regardless of the underlying “hardware”? So far, the success of Digital Ghost has grown from a customized, system-specific approach. The greater value, however, lies in optimizing the entire supply chain from generation to distribution, but herding a group of ghosts is no easy task.

Attention Hastings: Millennials are replacing “mom and pop” and machine learning will wipe you out

The Impact of Climate Change on U.S. Health: Is Aetna Planning Appropriately?

Student comments on Ghosts in the power machine