Genneia is a power generation company based in Argentina that operates thermal plants and windfarms in Argentina. The Company’s installed capacity consists of 280 MW of thermal energy and 78MW of wind energy[i]. Since its inception, Genneia focused on thermal energy until it slowly switched to renewables energies in 2009, when no other company was doing that in Argentina. They realized that the energy matrix in Argentina was unsustainable and that there was a global trend to shift from fuel-based energies to renewable energies such as wind or solar energy.

The Argentina energy matrix was unsustainable for many reasons. According to a document prepared by Boston Consulting Group[ii], Argentina is still facing three main problems in the power sector that were generated in the past decade:

Argentina presents a huge potential to develop wind energy over the next few decades. Patagonia, which is a region in the south of the country, is known as one of the best regions for generating wind power due to high wind speeds and capacity factor. The capacity factor in Patagonia, which measures the average power generated by a wind turbine divided by rated peak power[iii], is well above than that of windfarms in Europe and United States. According to Genneia’s estimates, its existing wind farm, Rawson WF, and the wind farm it is currently installing, have an average load factor of 44% and 52% respectively, well above 28% and 22% for United States and Europe on average. 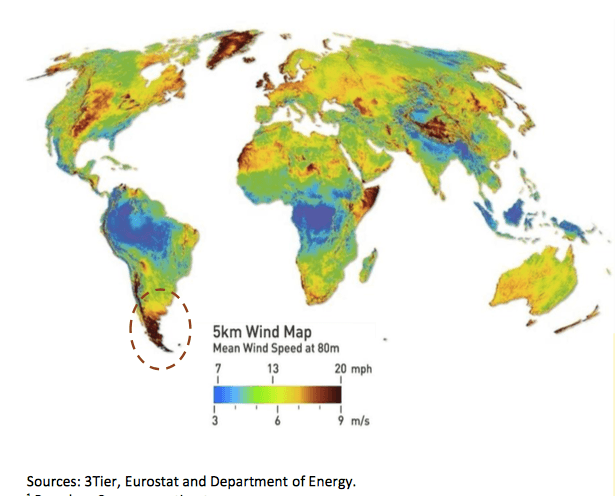 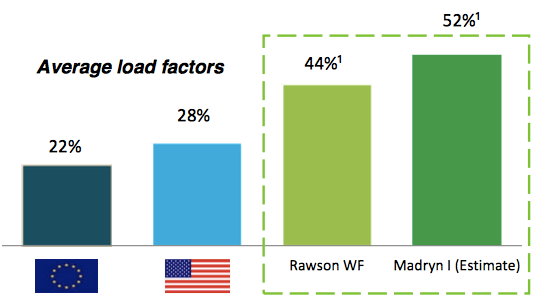 Despite the issues mentioned above, Genneia developed renewables in Argentina in an attempt to capture the potential that the industry has in Argentina and the global trend of reducing energy that produces significant amounts of air pollution. To understand the potential impact of Genneia’s strategy, the company presented some estimates about the consequences or shifting from a fuel-based plant to wind farms. Its main windfarm, Rawson WF, generates 300 GWH of electricity on average per year, which is enough to provide energy to close to 100,000 families in Argentina. On top of that, the country saves more than US$ 75 million in fuel imports (Argentina is a net importer of fuel), which is the equivalent to 86 m3 of liquefied natural gas. But the most important effect is that CO2 generated is reduced by 180,000 metric tons of CO2 per year, which is equivalent to almost 42,000 people driving to work everyday[iv]. This only considers Genneia’s existing windfarms with an installed capacity of 78MW. If we also consider the pipeline 500MW, the potential savings in CO2 could be increased to 1.3 million metric tonnes or 310,000 less people driving to work every day.

As mentioned before, Genneia has a pipeline to construct 500 MW of windfarms and is heading in the right direction. It switched from a pipeline of thermal projects to a sustainable pipeline of windfarms that both reduces carbon emissions and increases returns to shareholders. I think the company has plenty room for growth and the next steps should be to start researching alternatives to wind energy such as solar energy. Solar plants can be installed all across the country and have almost the same fiscal benefits as wind energy does, and also enjoys very competitive pricing, which makes renewable energy very attractive for investors.

[iii] Energy Numbers: What does the capacity factor of wind mean? http://energynumbers.info/capacity-factor-of-wind

From Overfishing to Overheated: The New Threat to New England Fisheries