“As we consume more than ever, climate change is accelerating as well…In fact, we know that 2014 was the hottest year in human history. These pressures combine to create real threats to security and stability around the world.”

Despite climate change emerging as one of the greatest threats of this generation, Ms. Hewson, as the CEO of one of the most globally renowned defense contractors, is still being criticized for having an Al Gore-like focus on the topic. [2] Beginning as an aerospace company in the early 1900’s, Lockheed Martin [LM] arose from the 20th Century as an international leader in security, innovation, and aerospace. Based out of Maryland, the company employs over 98,000 people, and has over $46 billion in sales with the U.S. Department of Defense being their primary source of revenue. They have made a name for themselves when it comes to aeronautics, missiles and fire control, rotary and mission systems, space systems, and most recently, energy. [3]

A Leader in Sustainability

Long before the leadership of the federal government addressed climate change, LM paved a path towards environmental sustainability. The future drives every aspect of LM’s strategy, and Ms. Hewson is quick to remind anyone that listens that the only future that exists is one with meaningful climate change. In 2007, the company published the “Go Green 2020 Goals.” The campaign sought to “reduce carbon emissions, energy, water, and waste. [4]” Perhaps it was anticipated, but two years after, President Obama established similar goals for the federal government and those they do business with in Executive Order 13423 [5].

Over the past ten years, both LM and the federal government have remained committed to the original goals set for 2020. While President Obama worked to increase the scope and depth of his executive order on climate change, eventually signing an extension with Executive Order 13514 [6], LM diligently worked to remain at the forefront of environmental innovation. Exhibit 1 outlines their holistic approach to sustainability, extending far beyond their original environmental goals of 2007. It was not long before they began to see the fruits of their investments. In 2014, they reached UK’s Carbon Reduction Commitment and by 2015, they were well on their way to reaching their 2020 pledge [7] (Exhibit 2 &4). 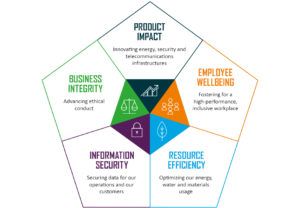 Though they were ahead of the curve when it came to regulation, LM was in the market of innovating future technologies and there was a clear necessity for stronger and less costly methods of capturing sustainable energy. Not only did such investments make sense from a value perspective, but they also seemed like a clear path to riding out the volatility of the U.S. Military’s downsizing and sequestration. Despite the clear dichotomy of skills required to be successful in the defense and energy industry, most other companies within the defense industry followed suit, but none over the past five years remained steadfast in their commitment like LM.

From harvesting ocean waves and temperature, to producing energy from waste, LM has tried it all. In China and Scotland, the company committed to massive projects that aimed to capture the power of both oceanic tides and temperatures. Most recently, the company has developed an “Advanced Gasification” process, which converts waste into useable energy (Exhibit 3). Though successful on these projects, such success did not without risk. Off the coast of Australia, the company paired with Ocean Power Technologies to develop the “largest energy wave project” in existence. Unfortunately, after only six months of work, the project proved unprofitable [8].

Their innovative reach continues into nuclear energy as well. Last year, LM committed to producing a vehicle-sized nuclear fusion reactor within the next ten years [9]. Such technology, when developed, will transform the modern day concept of energy. Such innovation is exactly what the world needs. Now that a breakthrough in design has been achieved, it is essential that LM focus their energy on fully developing and scaling this technology. Though they have proven successful in other fields of energy production as well, their unique success in the nuclear realm will undoubtedly benefit all.

While some competitors and investors may label Lockheed Martin’s commitment to energy as extensive and perhaps reckless, few can underestimate the value that they could provide if they get it right. It is important for all to recognize that it is through private sector companies, like LM, that true and impactful climate change will occur. The stakes are high and the risk and capital required for success is great; luckily, LM is positioned as a company that prides itself on large-scale innovation and tremendous investment. They must think big and take the risks that others will not.  Compact fusion reactors must be the beginning, and full-scale sustainability must remain the goal. 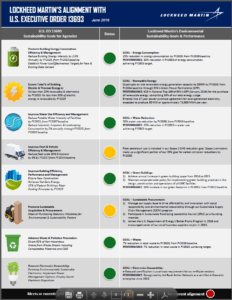 [3] Lockheed Martin, “Who We Are,” http://www.lockheedmartin.com/us/who-we-are.html, accessed November 2016.

[8] Christian Davenport and Amrita Jayakumar, “From Fighter Jets to Fish Farms: Why Lockheed Martin is Taking on Climate Change.”

The Melting Final Frontier: A Silver-Lining for Cargo Liners