Why does this matter?

The automotive industry is moving towards electrification, with the US electric vehicle (“EV”) market growing at a 32% CAGR between 2012-2016, approaching 40% in 2017; if this is maintained for the next six years, EVs will represent ~10% of US vehicle sales by 2023 [4]. From the below graph showing YTD sales of EVs in 2017, we see that numerous automakers are well-aware of this trend and are actively moving the industry, whereas government regulation is lagging, a welcome change for the industry [5] [6]. 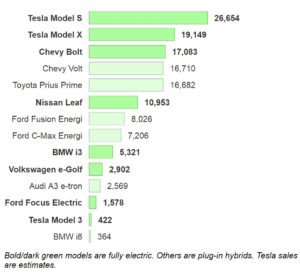 GM produced 11 vehicle models with some form of electrification to date, including the Chevrolet Bolt EV, which is the current 2017 Motor Trend Car of the Year, getting ~240 miles on a charge [2]. The company is continuously innovating towards a lower-carbon future in the near term, going beyond EV reliance, but also finding other ways to maximize output per given unit of energy input – both through internal initiatives such as “lightweighting” which cut 3,600 pounds across 10 vehicles across the product line, as well as through pseudo-inorganic means, which led to the formation of Maven, the company’s car-sharing service, which transported riders 4.2mm miles driven in the first seven months after launch [7].

Clearly, in the short run, GMs management is all over this; they also have incentivized key managers to stay on top of these trends by linking environmental performance with compensation [2]. However, management needs to be wary of competitors in the EV market (see the numerous brands in the above graph), as well as incoming new entrants such as Volvo, who have announced that by 2019, every car launched will have an electric motor [8]. As the price of battery and EV production decrease with improving technologies [9], as well as the eventual removal of government instituted subsidies for EV vehicles, management should be wary of erosion of their leading market position. As such, simply producing EV vehicles may not be sufficient in the short-term; GM must continuously improve and move down the production curve, both in terms of efficiency in producing more units, as well as sourcing lower cost inputs (resulting in a lower sticker price for customers once these protections are removed). Considerations should also be taken with respect to the location of future manufacturing locations in the name of environmentalism, depending on their proximity to the end user; and who that customer of the future may be – more on that to come.

This is where things get interesting.

Extrapolating environmental consciousness trends to the consumer out to 2030 results in a decrease in private ownership of vehicles, dropping by 80% by 2030 in the US, while electric ride shares will be 4.0-10.0x cheaper than buying a new car by 2021 [10]. Cars sold in the US sit idle for more than 95% of the time, an extremely wasteful proposition [11]. Reconciling this with GM’s commitment to environmental initiatives means fewer cars on the road – a problem if you are in the business of selling cars.

Naturally, GM requires a fundamental business shift going forward. Acquiring companies such as Strobe (laser-radar technology) [12] and Cruise Automation (automated driving) [13], GM has plunged headfirst into the world of autonomous vehicles, and by using an EV Bolt as a starting base [14], GM fleets are being tested across the nation, in an attempt to be the leading provider of vehicles that will shape urban transportation.

Extrapolating this out a decade, if/once safety, regulatory, and ethical kinks are worked out, and autonomous EVs are commonplace (a big if), GM’s supply chain will have to be completely inverted. No longer are they manufacturing for the individual, but rather for a city, county, or public entity; and once enough vehicles are on the road to satisfy the government entities constituents, there will be no more need for factories; no more need for new models released each year. Rather GM will have to reorganize its supply chain as one of a service company – providing maintenance for existing vehicles, offering support (advertisements, food, movies, phone, internet?) to riders as a part of the service, but occasionally, maybe the new model of autonomous vehicle, as after all, they still are General Motors.

Let’s Get Physical (and Digital): How GE is Shaping The Industrial Internet