Why does Digitalization matter?

Digitalization and the era of big data have the potential to transform industrial giants of the past and create a step-wise change in industrial productivity. While this trend will certainly impact GE’s customer base, perhaps more interesting in the short-term is its potential impact on GE’s own service supply chains.

In its various business units from Aviation, to Power & Water, to Oil & Gas, GE often enters Contract Service Agreements (CSAs) with its hardware customers. In this model, customers pay a flat annual fee to have their equipment serviced and maintained by GE. Lowering the cost to serve immediately impacts the bottom line, and downtime is expensive (as GE often pays penalties if a customer cannot operate). 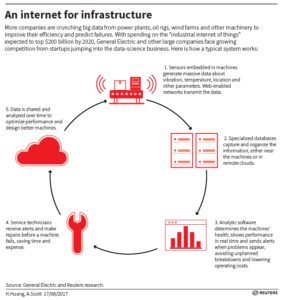 What is GE doing about it?

GE’s top executives (including Jeff Immelt, who recently stepped down as GE’s CEO, and John Flannery, now at the helm) recognized this trend early on and set a vision for GE to transform itself from an industrial manufacturer to a software and analytics company. To this end, in 2015 GE created a new business unit called GE Digital to house a software center and global IT capabilities [2]. The focus to-date has been on creating “Predix” – a software platform for creating applications for the Industrial Internet of Things [3].

It’s easy to see why GE took this centralized approach to creating digital capabilities. The idea was to perfect a centralized software platform, then quickly roll it out at scale across multiple business units, creating savings in their own service supply chains as well as a competitive advantage in selling new machines.

How has this strategy panned out so far?

Unfortunately for GE, not very well. GE Digital has not delivered the revenue investors wanted, despite high levels of capital spending ($2.1 billion invested in Predix and its applications over 2015 – 2017), and has essentially nothing to show for its ongoing efforts. In an uncharacteristic move, GE announced it was taking a “two month time out” in May and June of this year as a sort of emergency-surgery approach to get Predix back on track. [4]

Time out? Why did this happen?

At the heart of the matter, centralization in a single business unit divorced the software from the hardware it attempted to serve. Rather than focus on specific, value-add applications, engineers initially wasted time trying to build data centers, before shifting course in 2016 toward creating applications for specific machines.

Additionally, GE historically developed unique coding languages for systems within different GE businesses, which made it next-to-impossible to integrate them into a one-size-fits-all platform à la Predix. In an effort to grow quickly, GE Digital also made a series of dubious strategic acquisitions, including Meridium and ServiceMax, which only introduced more code that had to be converted to run on Predix. [4].

Flannery is quickly realizing the mistakes and money-black-hole that have defined GE Digital so far. In an earnings call on November 13th, Flannery announced he is cutting spending plans by $400 million in 2018, and focusing on a few products. [5]

But this is insufficient. To salvage the potential a digital platform can provide, GE Digital should be disbanded as a business unit entirely, and a SWAT-team approach should be taken from inside individual business units. Teams should tackle a couple of specific platforms, with large installed bases and relatively standardized models (e.g. the aeroderivative LM2500 engine in Oil and Gas, and the H-series gas turbine in Power and Water would seem logical choices).

God-willing, a successful model could later be scaled in other businesses and potentially centralized, but going for scale at this point just means burning more cash for no reward. This approach would also better align incentives, as the software development teams would actually share the supply chains and P&L’s of the products they’re attempting to impact.

There are certainly risks to this approach. Are the organizational competencies required for software development simply too different from the industrial business units’ traditional skills to get results? Would there be reputational impacts?

Possibly. But what we know is that what we have now is not working, and GE Digital needs a Hail Mary. Fast.

2 thoughts on “GE Digital: One Size Fits None”