Digital transformation has created an opportunity for General Electric to differentiate its manufactured products through data-collecting sensors, the Industrial Internet of Things (IIoT), and smart machines.  Interestingly, this old economy company is a leading innovator in the cutting-edge Internet of Things (IoT) space.  By using GE machine with dozens to thousands of sensors mounted on them collecting data, customers can perform analytics to improve asset performance and minimize unscheduled downtime.[1]  For example, in wind farms the turbines in the front affect those placed behind them.  This can lead to vibrations in the rear turbines that cause stress fractures in the blades, sometimes resulting in blade failure.  However, by using blades with sensors on them and collecting the data, wind farms can perform analytics that allow the turbines to adjust in real time to prevent stress fracture.  These analytics improve wind farm efficiency 2 to 5 percent, according to GE.  However, this requires the transmission, storage, and analysis of tremendous amounts of data.  For example, one sensor on one blade collects 520GB of data per day, and there are 20 sensors per blade.[2]

The efficiencies gained from IIoT-driven data analytics can create tremendous value in the economy.  See the graphs below: 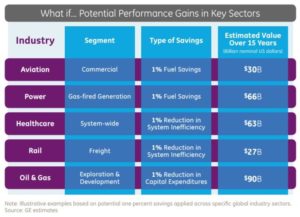 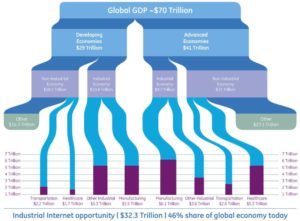 Increasingly, software will allow GE’s machines to self-manage through artificial intelligence, producing smarter machines and smarter factories.  However, the change to smart factories is not happening overnight.  This year, GE’s goal is to transform 75 of its 500+ factories to IIoT, but it faces challenges.  One challenge is how to get legacy equipment connected, as sensors already present on the equipment are made for maintenance and repair, not real-time data streaming.[3] This equipment cannot merely be replaced because of the large unanticipated capital expenditures associated with replacing equipment prematurely.

General Electric has delved deeper into the technology business by creating a software platform for the Industrial Internet of Things called Predix.  Predix is a cloud PaaS (platform as a service) that enables machines, data, and people to connect on a standard platform.[4]  This means that GE is effectively in the cloud computing business – datacenters and all – like an Amazon Web Services for IIoT applications.

GE appears to be succeeding in this new technology offering.  On Tuesday, it announced that its software and services business was projected to hit $6 billion in revenues for 2016, a 20% increase from 2015 (compared to total revenues of ~$140 billion).  GE seems to be on track to hit its goal of $15 billion of software and services revenue by 2020.  GE also announced industry-specific Predix software for the energy industry, machine operators, and other specialized applications.  GE is working hard to build an ecosystem around Predix, and noted that there are 19,000 developers building software applications on top of the Predix platform.[5]

General Electric has historically been a manufacturer of mechanical and electrical hardware, what some might consider “low tech.”  This shift into computing, software, and data analytics shows how important computing has become to the modern economy.  In some sense, every company is becoming a technology company.  I believe this is a great strategy.  GE is using its scale to invest in technology that smaller competitors cannot afford while moving the industry and world forward.  This will give it new revenue streams and cache, differentiate its legacy products, and build barriers to entry around its business and a long-term advantage over competitors.

The Digitization of Microfinance: bKash in Bangladesh

Student comments on GE and the Industrial Internet of Things