The Russian state-owned energy company Gazprom is in a fantastic position to respond to global efforts to address climate change. By extension, global climate action is also a geopolitical opportunity for Russia, which owns over 50% of the publicly traded Gazprom. Gazprom is, by far, the largest producer of natural gas in the world[1], supplying methane to Europe and, increasingly, China[2]. 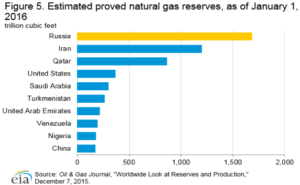 Limited to combustion driven processes due to its molecular simplicity, methane is primarily used in heating, electricity generation, and manufacturing feedstock applications. In these applications, substituting the incumbent energy source coal with natural gas can result in almost 50% less carbon dioxide emissions for the same amount energy released[3].

Pounds of Carbon Dioxide emitted per

In the future, increasingly aggressive global regulations of the coal industry will continue, a result of international agreements aimed at capping carbon dioxide emissions[4]. This will create a void in affordable energy supply specifically in Europe, with Russian natural gas best positioned to fill the global gap. Through Gazprom investments, Russia will be positioned to expand its political influence over Europe by supplying reliable, affordable energy to countries neglecting the policies and investment to support the development of their domestic, economically viable energy resources. 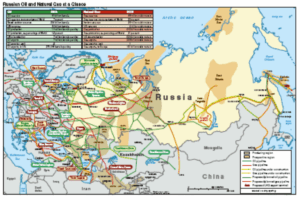 Russia has high concentrations of cheap natural gas across its expansive terrain. Gas resources in Russia have significant production spread across a decades-long, plateaued depletion profile. These lengthy production profiles empower Gazprom’s fundamental business strategy of building pipelines to supply gas to nations requiring affordable, heat-generating sources of energy. While building pipelines can be expensive, Gazprom is positioned to leverage the relationship with the Russian government to increase access to new resources and the pipelines required to transport methane to increasingly desperate markets. 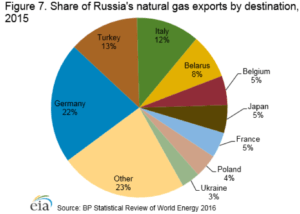 One of the primary global climate change skeptics[6], Russia will use Gazprom to take advantage of the developed world’s attempt to make coal obsolete. Gazprom will be positioned to expand the influence and materiality of their agreements to supply baseload energy to European countries that are eagerly turning their backs on economically viable energy policy.[7] As European countries continue to subsidize energy sources[8] that are not cost competitive with fossil fuels[9], Gazprom will ramp up production through increased drilling and operational maintenance, benefiting from the structural futility of Europe’s efforts[10].

Through increased investment in drilling and operations, Gazprom will provide natural gas to eastern European economies. With the understanding that democracies vote, and no one votes for cold showers, these countries will be increasingly indebted to Gazprom and Russia for supplying affordable energy. In Ukraine and the conflict over Crimea, we have recently seen the economic and military consequences of neglecting this symbiotic relationship[11]. Russia, sitting on the cheapest (and most geopolitically stable) supply of energy in the region, will ultimately be preferred to the riskier Middle Eastern reserves as well as to the much more expensive liquefied natural gas being transported from North America, Africa, and Asia.

The insatiable appetite of climate change