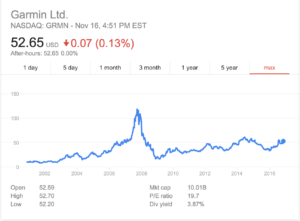 See that peak? Share price for Garmin hit $119.40 in September 2007, growing 7.5 times since its humble public offering in December 20001. Even as shareholders rejoiced in the success of Garmin’s personal navigation devices (PND) that used the (then) latest technology in Global Position System (GPS), strong headwinds were en route that would force the company to change strategy and product mix.

2007- Growth via New Product Launches
In 2007, Garmin launched many new variations of its nüvi® personal navigation device with real time updates on traffic, and gas levels, along with built in features such as an MP3 player, Bluetooth and the ability to program ‘points of interest’ in to the device2. Sales reached $3.2 billion (180% over sales in 2006), with 73.6% contributed by nüvi® in automotive/mobile category2, and the balance divided among Garmin’s other categories- outdoor/fitness, marine and aviation products.

2008- Economic Downturn and Competition
The 2008 recession brought with it a steep decline in sales across all industries especially automotive. The complementary nature of the relationship between buying new vehicles and buying PNDs meant that customers had little incentive to buy a $200-$499 Garmin device. Added to this pressure was the emergence of the increasingly popular and convenient smartphone and navigation apps by both Apple and Google that also allowed for real-time navigation. Needless to say, Garmin sales began to suffer, and investor confidence weakened leading to the precipitous decline in share prices.

From the 2007 10-K2, Garmin states that they believe they ‘compete favorably’ in the highly competitive market for navigation and communications, however out of their 9 principle factors for success, they never included ‘innovation’. Garmin also stated that they spent only 5% of sales on R&D in 2007. Both facts indicate a lack of foresight and proactivity to invest in further technological advancements during ‘peace-time’ to keep the Garmin PND relevant.

Reacting to SmartPhones and Map Apps
In reaction to the launch of smartphones, Garmin decided (rather hastily) that it should catch up. Garmin launched the Garminfone3 that failed to attract customers, especially compared to the more sophisticated Apple iphone and Google Android. 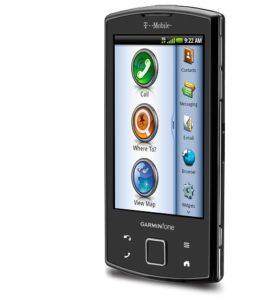 To its credit, Garmin was not discouraged, and launched its own navigational mobile app called StreetPilot3 that could run on most phone operating systems- but at a price of $40-$50. Needless to say, Garmin lost more popularity. By 2009, share prices were barely above their initial public offering of $14 (see top of blog).

Garmin HUD, New Nüvi® and Outdoor/Fitness
In early 2013, Garmin sales fell again by 22%, due to a slow down in automotive sales4. 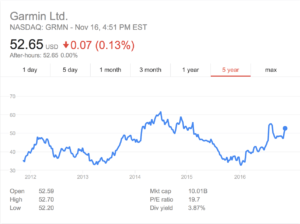 That summer, Garmin launched an innovative product called the Garmin HUD5, or Heads-Up Device, with retail price of $130. This standalone device was kept on the dashboard, connected via Bluetooth to a smartphone with StreetPilot, and projected navigation instructions on the windscreen so the driver did not need to look down at his phone. However, Garmin failed to consider the plethora of smartphone stands available on Amazon that also helped with ‘heads-up’ capability at a fraction of the cost. It is not clear that Garmin HUD sold well. 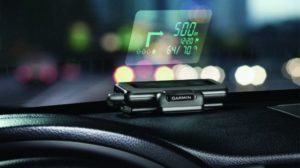 In 2014, Garmin relooked at their nüvi® PND6, and yet again made a failed attempt to ‘reinvent’ the smart phone, while being primarily an automotive aid. Stock prices were on the rise however, because Garmin began to shift strategies to compete in the ‘wearable fitness devices’ market. However, a quick view at PCMag.com, and the average consumer has trouble distinguishing between the customer value proposition of the Garmin Vivoactive7, Fitbit, Apple watch (with fitness apps), Apple Watch Nike+ and other players. Once again, Garmin was playing the copycat game.

In late 2015 when stock prices began dipping again (see image above), a Dougherty analyst said, “we are beginning to lose confidence in the company’s ability to react quickly to industry trends it should be capitalizing on8”.

Lessons Learned from Garmin
Changes in technology are fast and unforgiving. Garmin was definitely at the forefront in 2007, but was very quickly phased out. Garmin could have kept a closer watch on shifting trends and market demands to stay ahead, instead of constantly trailing behind and launching products after its competitors did. Admittedly, this is easier said than done, as even Apple is now feeling the pressure to make significant improvements in each subsequent iPhone.

Currently, Garmin should invest in differentiation for the Vivoactive to ensure it is not phased out by better technology. Additionally, Garmin could revive its automotive revenue by partnering with car companies to incorporate HUD into the whole windshield, creating a futuristic look and adding convenience. To stay successful in the long term, Garmin should leverage and improve upon its GPS technology to carve out a niche for itself in perhaps the biggest connection initiative of all time- the Internet of Things. (798 words)

4 thoughts on “Garmin- A Tale of Playing Catch and Copycat”