GameStop’s CEO has boasted that his Company will succeed because it is “such a complex animal”. Digitalization headwinds, however, seem to be driving the complex animal to extinction.  GameStop Corp. (GME) is the world’s largest video game retailer with over 7,000 stores globally. The Company is publicly traded on the NYSE and commands a market capitalization of ~$2.5 Billion and generates an attractive return on equity. That’s about where the good news ends for the Company. GME has found itself in a slowly tightening vice, squeezed by secular trends in digital transformation. Growing e-commerce, a shift towards mobile gaming and a transformation to digital game downloading are all emerging as formidable threats to the business and leave the Company very few options to adapt.

Everything that GME sells in its brick and mortar footprint is now available online and many businesses have optimized this business better than GameStop has done with their online offering, notably Amazon. E-commerce sales totaled $342 Billion in 2015 after growing 14.6% YoY. Notably, 60% of retail sales growth occurred in e-commerce (9).  In this context, the growth in e-commerce represents a threat to GameStop going forward as it struggles to compete in that arena.

A decade ago, GameStop could not have envisioned another major threat to its business-mobile gaming. Mobile gaming revenues are poised to surpass console and PC games in 2016 for the first year ever (8). The $36.9 Billion mobile gaming market is out of reach for GameStop and so as this market continues to grow, GameStop will struggle to remain relevant. The overall gaming market is growing 8.5% YoY, however, so GameStop is seemingly participating in a large ($60 Billion) and growing market in PC and Console gaming.

So why is the company in dire straits if it can manage e-commerce and mobile changes?  Far worse than these for GameStop is the existential threat posed by digital game downloading. With widespread internet connections and faster internet speeds, consumers are increasingly able to download games straight to their computers or consoles rather than visiting a GameStop. In 2015, it is estimated that 20%-30% of all software sales were delivered through PlayStation Network or Xbox Live, which GameStop doesn’t make any revenue from (4). The movement to digital downloading is likely to continue given rising internet speeds affect of shortening download times, a frequent complaint of consumers. According to Nielsen’s law, internet connection speeds increase by 50% per year (See Exhibit 1) (7). Even worse, many games now allow early downloading, so that the game becomes available simultaneously with a new games physical release(10). An additional threat is that game makers have transitioned to selling expansion packs and add-ons online rather than selling them physically. Electronic Arts sold $1.06 Billion in digital extras in 2015, Activision cleared $1.6 Billion in digital sales, with the overall market in digital extras growing 8%(5). Ultimately this is not a market that GameStop will have access to and the game makers are more than happy to have a D2C platform that they can more profitably sell through. 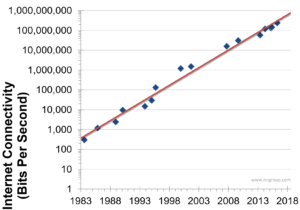 GameStop has not been idle in trying to combat these trends, but it is relying on a few old tricks that might not be sustainable. The Company has aggressively built out a new segment in aftermarket sales of mobile hardware. In 2016, GameStop aims to add 300 to 400 technology branded stores under Simply Mac or Spring Mobile banners to participate in this reseller business (1). It has also gotten into the refurbishment business for FitBit products as it aims to stay relevant in hardware. This electronics business is still quite small, representing just 6% of overall sales, so it will certainly not be GameStop’s saving grace (3). The Company is also aiming to be nimble in its video game store footprint, closing 125 underperforming locations in 2015 to boost profitability (3). Critical to GameStop’s value proposition is its resale business which it has aimed to protect and foster as a defense against the push to digitalization. GameStop’s resale business generates 27% of revenue and 44% of profit for the Company. More importantly, it provides a source of income for customers to purchase new games and it generates foot traffic into its retail locations since customers have to physically trade-in game discs(6). Both Microsoft and Sony have flirted with totally eliminating physical game discs and GameStop has pushed back so that at present GameStop can retain this business. Since the console makers and game makers see no additional revenue from this secondary market, it remains unclear how feasible this business will be in the long-term.

There aren’t any great options for GameStop on a forward-looking basis. By virtue of its young customer base, it still manages to control 30%-40% of digital add-ons and 10%-15% of full game downloads because young customers do not have credit cards to purchase the content online(6). This represents $830 million out of GameStop’s $9.6 Billion in revenue, so is meaningful but not adequate to keep the Company a going concern should it lose its physical game sales. As much as possible, GameStop has to aim to keep this market and grow with digital game downloading. A radical option that the company should employ is including console manufacturers and game makers in their resale profits as a way to keep physical sales. Although this will be detrimental to GameStop’s bottom line, this is the only way to disincentivize console makers from shifting to only digital and destroying GameStop’s business. Overall, management should realize that they will- in all likelihood – be the next Blockbuster and the best use of their cash is not to reinvest in new businesses or advertising as a way to drive store traffic, but rather they should optimize cash flow and aim to return as much profit to shareholders as possible before they ultimately have to shutter their doors.

The Onslaught of Digital unto Nuclear Dinosaurs

Duolingo: Working for your Education

Student comments on GameStop – A casualty of digitialization?