The digital revolution in photography has dramatically changed the way we take and share photos.  As a child, I remember taking film to the store to have them developed, order extra prints, and physically placed them in our photo albums when we got home.  Today, we can take photos with our smartphones and share them with anyone in the world in a matter of seconds.

Like every technological advance, the triumph of digital photography has created significant challenges for some industry players.  Kodak and Fujifilm, manufacturers of photographic film, saw demand for their products sharply decline, causing Kodak to eventually file for Chapter 11 bankruptcy in 2012.[2]  Fujifilm, on the other hand, was able to survive by diversify their product portfolio by leveraging their photographic film technology to start making cosmetics – yes, you heard right, cosmetics.

Fujifilm and the Film Industry

A Japanese company founded in 1934, Fujifilm started manufacturing film for motion pictures based on a government plan to establish a domestic photographic film manufacturing industry.[3] In the 1960s, it began its endeavor to expand its business overseas, in an aim to catch up to the dominant industry leader, Kodak.  In the 1980s, it became apparent to both Kodak and Fujifilm that the age of digital photography was right around the corner, and from a global peak in 2000, demand for camera film dropped 90% in 10 years as the digital revolution transformed the industry.  [4]

Like Kodak, Fujifilm continued to reap profits from film sales, invested in digital technologies and tried to diversify into new areas.  At both firms, the employees in the profitable film division were in control and late to admit that the film business was a thing of the past.  So, why the different outcomes?

Although the two companies shared similar assumptions and internal politics, the differentiating factor was in execution.  What Fujifilm did was go one step further than simply shift to digital photography from analog.  Instead, it leveraged its chemical expertise to pioneer new business fields.  Under Shigetaka Komori, who became President in 2000 and CEO in 2003, Fujifilm underwent a bold and distinctly un-Japanese process of structural reform and aggressive acquisition.  They looked at the fields to which its existing technology could be adapted and started acquiring companies that would complement their business. They moved into digital X-ray and endoscopes; they now have a 70% world market share of tac film, an essential component of all LCD screens.[4]

Another area it pursued was cosmetics (which they call “Life Science”), which was set up as a division in 2006.  They found that the chemicals they developed over the years to prevent color in photographs from fading, could be used on skin too.  Unknowingly, in their efforts to perfect film stock the researchers had been laying the groundwork for a skincare business. (Below shows nanoparticles of Astaxanthin, a red ingredient filled with beauty power, that Fujifilm formulated which became the basis of their skincare products.) 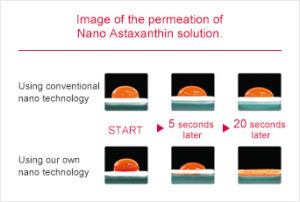 In 2007, Fujifilm launched their anti-aging skincare line ‘ASTALIFT’ which quickly gained popularity.  In the following years they expanded to China, Southeast Asia, and Europe, while becoming one of Japan’s top-selling anti-aging skincare brands. [5]

In contrast to Fujifilm, who realized the need to develop in-house expertise in the new businesses, Kodak believed its core strength lay in its strong brand and marketing, and could simply partner or buy itself into new industries, such as chemicals and drugs.  However, this approach proved unsuccessful as they realized without in-house expertise, they lacked the ability to effectively vet acquisition candidate, integrate companies it had purchased and negotiate profitable partnerships.

For example, when sales from film developing and printing were dwindling, some revenue could still be gained by installing kiosks to print digital photos.  Whereas Fujifilm had its own system, Kodak needed to partner with another firm—and thus share the income.  Moreover, when Fujifilm applied their kiosk technology to other businesses in its digital-imaging division, Kodak could not since it didn’t own the technology.

In an age where technological advances are occurring faster than ever, companies need to be more proactive in sensing and adapting to the changing times.  Fujifilm’s example reminds us the importance of having in-house expertise and constantly looking into new technologies.  It also teaches us that “execution” is just as critical as having the right “strategy”.

Efficient Roadways: How the Masspike is speeding up your commute

4 thoughts on “Fujifilm: Surviving the digital revolution in photography through diversification into cosmetics”