I stepped out of my car and onto Arkansan soil for the first time in 2013.  One thing was certain – I wasn’t in Kansas anymore… but I was close!  I came to Arkansas to work with the largest retailer in the world, Walmart.  I’d just driven to the local Walmart supercenter to purchase some groceries.  When I looked around I noticed a wind turbine sitting in the parking lot.  What was going on here, wasn’t Walmart supposed to be the enemy of all things green?  During the 3 years I worked in Arkansas, I saw a side of Walmart that I never noticed before.  Walmart cared about sustainability, but why?

Walmart owns and operates over 11,500 retail locations throughout the world.  It provides a convenient place to purchase food and basic goods to over 260 million people each week [1]. Given its large global footprint, Walmart is highly susceptible to impacts from global climate change.  Analyzing its business model there are 3 key areas where I see Walmart being particularly vulnerable to changes in the climate; Sourcing, Energy Consumption, and Branding.

To combat this risk, Walmart began working with suppliers across its supply chain to make changes to both product packaging and ingredient sourcing.  One key example of this was partnering with laundry detergent suppliers to switch from regular formulas to concentrated formulas.  By doing this Walmart helped reduce the number of plastic bottles that were produced and eventually thrown into landfills.  Walmart began working with suppliers to make this change during the 2000’s [2], and by its own measures the initiative was a success. [3]

From an ingredient sourcing perspective Walmart has transitioned 27% of its private label food products to use only sustainably sourced palm oil [4].  Non-sustainable Palm oil harvesting contributes to deforestation [5] so making this change should have a positive impact on the environment.

While I applaud the changes that Walmart has made, I think there is more they can do.  For example, why stop with just reducing the number of detergent bottles that end up in landfills – why not work to eliminate the problem altogether by championing a fully compostable bottle?  As far as its palm oil initiative, 27% is a good start, but that still means that 73% of its oil is coming from non-sustainable sources.

Walmart is estimated to consume over 29,000 gigawatt hours of energy each year [6].  Rising energy costs, either from more expensive energy sources or higher regulatory costs, could have a big impact on how it keeps the lights on at each of its 11,500 retail locations.  Walmart has made two big moves to start reducing the amount of non-renewable energy it consumes.  The first is switching to LED lights in its new and remodeled stores.  LED lights consume less electricity per hour than more traditional fluorescent lights [7].  A second initiative is installing solar panels in some of its stores to help offset its dependence on non-renewable sources of energy [6].

While these are moves in the right direction they have been done on a small scale, the LED’s for example were only done in 150 stores out of 11,500 (as of the press release).  Why hasn’t Walmart moved to do anything with its other 11,350 stores yet?

One of the largest drivers for retail sales is foot traffic.  The more consumers that walk through a Walmart store, the more revenue Walmart generates.  Intuitively then, to attract customers Walmart is concerned about creating a brand that shares the values of its target customers.  A recent poll done by Statista showed that millennials do care about shopping at retailers that share their values (e.g. sustainability); however, it was only number 12 on a list of 14 reasons.  Carrying affordable products was the most important thing for millennials.  Maybe this explains why some of Walmart’s improvements in sustainability seem half hearted?

What matters most to Millennials when choosing where to shop? 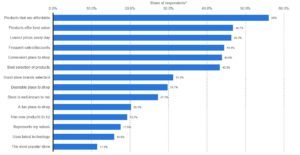 Walmart has done much more in the sustainability space than I gave it credit for my first day in Arkansas.  As the largest corporation in the world though, its work is not over and there is more that can be done to set the pace on sustainability for everyone else.  What else do you think Wal-mart should do?

[8] “What matters most to millennials when choosing where to shop.” Statista, May, 2014 https://www-statista-com.ezp-prod1.hul.harvard.edu/statistics/317798/us-millennials–most-important-aspects-when-choosing-where-to-shop/

Climate Change Is a Global Problem, so Why Are We Solving It Piecemeal?

Student comments on From EDLP to EDLT