FreshDirect (the “Company”) is an online grocery retailer that primarily focuses on the dense New York City (“NYC”) metropolitan area. FreshDirect has no physical stores and the majority of its operations are conducted out of a 300,000 square foot distribution center located in Long Island City, New York. In this post, I will highlight how FreshDirect is effective at driving alignment between its business and operating models.

FreshDirect’s business model is based on providing home delivery of affordable high quality groceries to consumers that live in the NYC metro area. FreshDirect has focused on this area because (i) groceries tend to be more expense in densely populated metropolitan areas than other parts of the country and (ii) most consumers in the NYC metro area do not own an automobile and are thus limited with respect to the quantity of groceries they can purchase in a single trip. The latter becomes an even more compelling reason to shop online when shopping for a medium-large sized family.

FreshDirect’s operating model relies on a 300,000 square foot distribution center located in the borough of Queens, New York. Siting is crucial and FreshDirect is fortunate to have roughly four million people living within a 10-mile radius of the distribution facility. As FreshDirect has no physical grocery stores, it combines the retail and wholesale functions into one unit. Orders placed online are typically scheduled for next-day delivery using FreshDirect’s fleet of ~150 delivery trucks.

The video below provides a guided tour of FreshDirect’s distribution center:

In regards to perishable goods, FreshDirect has created strong ties with local producers to ensure an adequate supply of goods as well as a minimum quality standard. Furthermore, FreshDirect promotes the products of the local producers on its website as a way to help drive revenue for these producers and maintain the symbiotic nature of the relationship.

Alignment of Business and Operating Models

The first instance of alignment between FreshDirect’s business model and operating model is the lack of physical grocery stores. As an online grocer, FreshDirect does not incur the same amount of overhead as national and regional grocery chains. This low cost structure helps the Company offer affordable products to its customers.

Another significant instance of the operating model supporting the business model can be seen in FreshDirect’s seafood department. The operating model helps the business model achieve the goal of providing high quality products by shortening the supply cycle. FreshDirect has employees stationed at the docks in lower Manhattan to place initial seafood orders as the various boats arrive with the day’s catch. At 11:00 pm, FreshDirect stops taking orders for next-day delivery and provides a final order tally to the seafood buyers. The specified quantities of seafood arrive at FreshDirect’s distribution center by 3:00 am, at which point they are cut to customer specifications by early morning and sent out for delivery that day. As a result, the customer ultimately receives seafood with a “dock-to-door” time of less than 24 hours. From a quality perspective, this compares favorably to a traditional grocer’s seafood counter that carries seven to nine days’ worth of inventory. The FreshDirect seafood department is the perfect example of the business model leveraging unique capabilities of the operating model to drive performance; FreshDirect is able to use its near-term order visibility to implement a “just-in-time” inventory system which reduces waste and increases product quality.

From 1:45 to 2:15 in the video below, FreshDirect’s CEO highlights the importance of inventory turnover and compares FreshDirect’s “just-in-time” model to that of Dell:

FreshDirect understands that their business model and operating model work best in a densely populated area. As such, the Company has been hesitant to expand outside of the New York City metro area because of the low barriers to entry exhibited in other areas. However, in recent years, FreshDirect has seen several new competitors enter the NYC market with varying strategies. While the Company’s business model and brand equity provide its main competitive advantages, FreshDirect’s operating model also serves to protect the Company from competitors.

The operating model’s most obvious competitive advantage is its strategically located and well-positioned distribution center. As the Company operates in a densely populated area, finding sufficient space that passes the various zoning requirements would be a significant challenge for many potential competitors. See below for an aerial view of FreshDirect’s distribution facility: 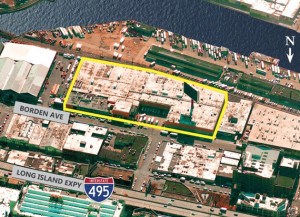 While a few of FreshDirect’s competitors (Instacart, Google Express, etc.) have implemented operating models that negate the need for a distribution center, one of the reasons FreshDirect has maintained its customer base is because of the high quality offering it provides as a result of its compressed supply chain.

Recently, AmazonFresh emerged as a competitor to FreshDirect in the northeast US. Using its significant balance sheet, Amazon was able to acquire the necessary warehouse space and delivery trucks to truly challenge FreshDirect. At this point, FreshDirect’s primary defense lies with its brand equity and reputation for quality. Will consumers trust Amazon to provide their groceries or will they consider this outside of Amazon’s “wheelhouse” or core competency? Are consumers willing to pay the $299 annual membership fee for AmazonFresh compared to FreshDirect’s modest delivery fee that is charged per order? We will learn the answers over the next few months, but for me, when it comes to buying the food that will go into my body, I’m going to stick with the guy that specializes in this area.

Student comments on FreshDirect: Knowing when to stay in your lane