Fresh Del Monte Produce (the “Company” or “Del Monte”) is a leading vertically integrated producer, marketer, and distributor of fruit and vegetables. Based in Coral Gables, Florida, the Company sources its products primarily from company-controlled (~45%) and independent farms (~55%) in Central and South America, Africa, and the Philippines. Del Monte is the largest marketer of fresh pineapples, the third-largest marketer of bananas, and a leading grower and marketer of tomatoes in the United States.[1] Similar to other agribusiness operators, Del Monte’s future success is uniquely tied to global climate change as its business model is both a meaningful contributor of global greenhouse gas (GHG) emissions yet also highly sensitive to the effects of climate change.

While understandably vulnerable to changes in the global climate (changes in temperature, precipitation, etc.), agricultural production is itself a significant driver of climate change. In recent years, it’s been estimated that agricultural production has contributed to ~20% of direct GHG emissions, second only to the energy sector.[2] Not only is agriculture a primary driver of global deforestation, but livestock and the use of synthetic fertilizer also produce methane and nitrous oxide, super pollutants with higher global warming potential than carbon dioxide.[3] Additionally, the global transportation of, say, Del Monte bananas sourced in Costa Rica or pineapples from the Philippines further contributes to agriculture-driven GHG emissions. For a brief overview of farming emissions, see figure 1below

In 2008, a report by the Intergovernmental Panel on Climate Change estimated that climate change had reduced global agricultural production by 1 to 5 percent over the past 30 years and that extreme weather events impacting agricultural production played a meaningful role in global food price volatility.[4] Importantly, many scientists predict severe weather events will occur more frequently should the trend of increased emissions of heat-trapping gases continue. Already Del Monte has seen the impact on its operations from volatile weather patterns. In 2010, unusually heavy rains and flooding in Guatemala negatively affected the Company’s banana production operations and led to ~$6 million in losses.[5] Aside from more volatile weather events, other anticipated affects from climate change include stagnating plant production yields and changes in precipitation and rising sea levels that could reduce the availability of fresh water for irrigation.

In response to the increasing risk of global climate change, Del Monte has made several early efforts to reduce its operations’ impact on the environment, including setting 1-, 3-, and 5-year goals for reducing its generation of GHG. As an example, the Company recently launched an irrigation optimization project with the California Tomato Growers Association. The initiative is designed to reduce water use while maintaining crop productivity and thereby minimize the strain on drought-stricken regions and prepare for possible future periods of more arid conditions. Similarly, the Company has focused on optimizing the amount of fertilizer applied to crops with the hope of lowering the pollutant impact on nearby waterways and decreasing Del Monte’s overall use of synthetic fertilizers which are developed from non-renewable fossil fuels and generate ‘super pollutants’ in methane and nitrous oxide.[6]

In light of expected pressure on crop productivity as temperatures climb in key growing regions, Del Monte is engaged in developing higher yield crops to ensure continued operational productivity (e.g., a 10% increase in crop yield would result in ~10% less acreage required for the same level of production and ~10% fewer inputs such as synthetic fertilizer, farm equipment and fuel). Finally, given the economic and environmental implications of the Company’s energy use, Del Monte has implemented an array of energy reduction initiatives. As a result of these initiatives, in 2011, the Company received the Greenhouse Reduction Award from the California Manufacturers and Technology Association and the Industrial Environmental Association.[7]

What else should Fresh Del Monte consider?

As a noted key risk in the Company’s 2015 annual report, future regulations related to climate change and GHG emissions could have a meaningful impact on the food production industry. While Del Monte’s environmental initiatives are relatively incremental thus far, given its vulnerability to forecasted changes in the global climate, Del Monte should take on a more proactive role in leading the development of agribusiness emission regulation and in thinking strategically about how the industry can leverage new technology to create a shift towards lower impact agricultural production. Furthermore, with more than 55% of its produce sourced from independent growers, Del Monte should set standards for its entire supply chain to adopt science-based targets for emission reductions. Given the criticality of these issues on Del Monte’s operations, the Company shouldn’t wait to be compelled to act by government regulation. 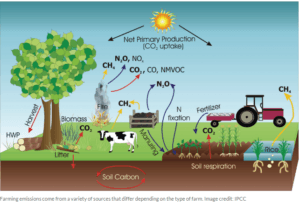 [3] Natasha Geiling. 2016. Agriculture, A Huge Contributor To Climate Change, Is Starting To Clean Up Its Act. [ONLINE] Available at: https://thinkprogress.org/agriculture-a-huge-contributor-to-climate-change-is-starting-to-clean-up-its-act-7032017be855#.oy8okmnsn. [Accessed 04 November 2016]

Be thankful for what you eat today; climate change can take that privilege away from you

Building the change: Are those 4 walls around you to blame?

Student comments on Fresh Del Monte: A Victim of its Own Success