The global movement toward protectionist policies has serious implications for Ford Motor Company and its operations in the United Kingdom and Europe. Ford, as part of the automobile manufacturing sector, operates in one of the most targeted industries in a broad retreat from globalization where two-thirds of all new government trade policies since 2008 have been isolationist in nature.[1] Great Britain’s 2016 vote to leave the European Union is one of the most poignant examples of this widespread movement and the details of the plan for transition in 2019 are critical to Ford’s future business strategy in Europe and globally.

Ford is particularly vulnerable to the Brexit decisions because of its decentralized supply chain across Europe and its significant recent investments in manufacturing facilities in the UK. In the decade following 2000, Ford invested more than £800 million to convert its plant in Dagenham, England from building the Fiesta to its current role of designing and manufacturing diesel engines to supply other assembly plants.[2] By 2013, Dagenham accounted for over 50% of Ford’s global diesel engine production, even though Ford no longer assembles any vehicles in the UK.[3] In 2014, Ford completed an additional £475 million investment to add a green diesel production line that increased employment by 300 employees and added an additional 500,000 engine capacity, pushing annual production to well over one million engines.[4] Any changes to the existing trade policies will affect the profitability of the Dagenham plant and force Ford to make tough supply chain decisions regarding future production strategies.

There are several specific implications of the Brexit agreement that could make continued production for Ford in the UK financially unfeasible. Excessive paperwork associated with customs checks—as much as 20,000 separate declarations—would hamper export of engines to Germany and other countries.[5] Ford could also end up paying tens of millions of pounds each year for additional warehouses to create inventory buffers to protect against customs bottlenecks and Ford assembly plants might fail to meet Original Equipment Manufacturing (OEM) requirements which determine tariffs according to the percentage of vehicle components manufactured in Europe.[6] While the costs of Brexit are often associated with these customs issues, other considerations such as the ability to influence EU regulations, employee mobility through Europe, and bargaining power between the EU and other foreign markets are almost important concerns.[7]

In the short term, Ford has already raised prices of finished vehicles reimported into the UK to try to recoup costs related to the Brexit vote.[8] Ford also needs to engage in the Brexit conversation to shape the conversation where it can and to anticipate future policy changes elsewhere. By working with other auto manufacturers, Ford can draw the government’s attention to areas of concern and provide relevant economic data to strengthen the arguments for particular decisions. For example, Honda has lobbied the UK government to raise the quota of Authorized Economic Operator (AEO) companies to streamline custom approvals should the UK leave the EU custom zone (the UK has 600 AEO companies to Germany’s 5000).[9] While the EU might be reluctant to give Britain concessions in the terms of the Brexit agreement, there is an opportunity for Ford and other major automotive manufacturers to also work with the EU government to influence Brexit negotiations. The auto industry is an important employer and source of tax revenue across Europe and no country would want to see companies decide to consolidate outside the EU.

Figure 1. Inside a Land Rover Discovery [10] 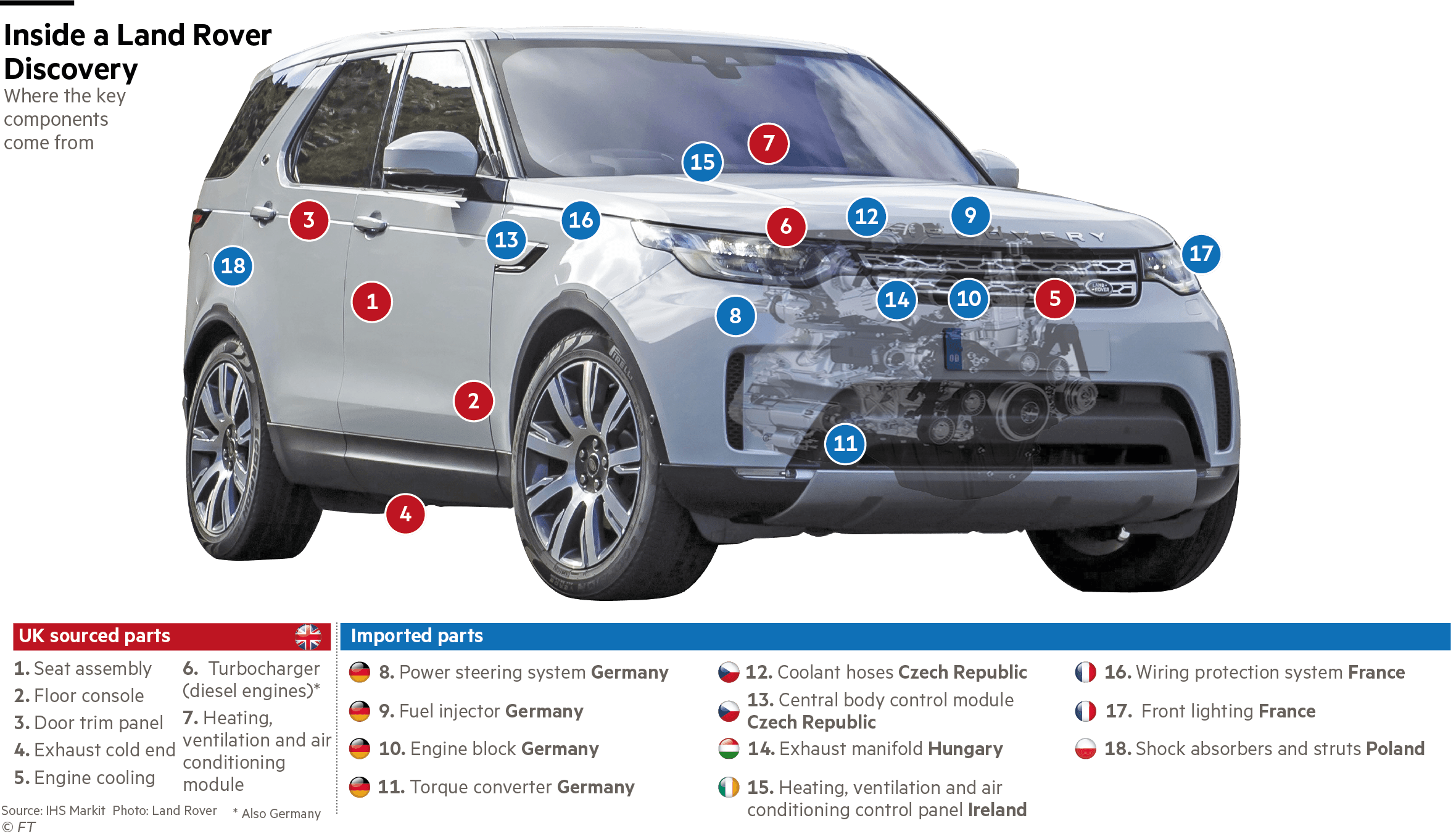 In the medium term, Ford will need to restructure its supply chain to take into account the impacts of the Brexit agreement. Nissan and other manufacturers that assemble vehicles in the UK rather than elsewhere in the EU, have already decided to relocate suppliers to the UK to hedge against OEM risks (see Figure 1 for example of part production distribution).[11] Despite the expensive investments in its two remaining UK plants, Ford might need to consider consolidating suppliers near European assembly facilities. In fact, Ford has already proposed closing both facilities citing expectations to lose as much as £1 billion between 2016 and 2018 due to the Brexit decision.[12] In addition to raising prices, Ford should also seek economic incentives from the UK government to stay. Like Europe, Britain will want to retain Ford as a significant employer and source of tax revenue and might be willing to make favorable offers. Furthermore, Ford may be able to recoup some of its losses by selling to manufacturers trying to reconsolidate in Britain. None of these efforts will completely offset the impact of Brexit but they will help Ford continue to stay competitive through this uncertain economic period.

Considering the several decades that the UK has existed as a part of the EU, how closely will future trade relationships reflect the existing relationship? To what extent will Brexit drive companies like Ford to reverse their trends toward global supply chains?

Could smart supply chain financing have saved Toys R Us from bankruptcy?

Drugs at Your Doorstep: Amazon’s Threat to CVS Health and the Future of Drug Delivery