“The auto industry is poised for more change in the next five to ten years than it’s seen in the past 50.”

The IBM Center for Applied Insights recognize that “for more than 100 years the automotive industry has created competitive advantage mainly through engineering excellence. Going forward, this will no longer be sufficient” [2]

The industry is now on the brink of significant change. This change is due in large part to the digital revolution brought about by a perfect storm of technological influences such as big data and analytics, cloud computing, the socialization of business through mobile devices, and at the eye of the storm, the Internet of Things (IoT).

This digital progress will lead to four disruptive technology-driven trends in the automotive sector: 1) diverse mobility, 2) autonomous driving, 3) electrification, and 4) connectivity. “Most industry players and experts agree that these four trends will reinforce and accelerate one another” [3]

The following infographic from IBM highlights a number of emerging digital services and their expected level of disruption to the auto industry: 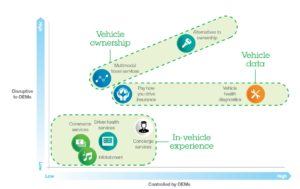 The most disruptive threat automakers face is to car ownership itself.  Although car sharing (popularized by the likes of Zipcar) has been around for some time, it is becoming more widespread as automakers enter the market (examples include Daimler Car2Go and BMW DriveNow).  One estimate suggests that each car available for sharing leads to 20 vehicle sales being deferred [4].

Cars are an expensive asset (that depreciate significantly) and also highly inefficient; private vehicles spend roughly 95% of their time unutilized [5].   As innovative transport solutions become available from new players (such as Uber, Apple, Google, Tesla), the complexity of the competitive landscape will intensify.  McKinsey believe that this will lead traditional automotive players, who are faced with myriad other challenges (such as improving fuel-efficiency, reducing emissions, deploying capital efficiently etc.) to respond with consolidation or new forms of partnerships amongst incumbents. [6]

Ford is evolving its business model to stay relevant

This is exactly the approach adopted by Ford, who many would consider an embodiment of the “old guard” of the industry.  Speaking at CES 2016 CEO Mark Fields acknowledged that Ford is “transitioning from an auto company, to an auto and a mobility company.” [7] This evolution is outlined in the Ford Smart Mobility Plan [8] which is underpinned by 5 pillars (see figure below):

Examples of recent initiatives include the acquisition of Chariot, a private, crowdsourced shuttle service based in San Francisco, that uses algorithms to develop transit routes based on user demand. Using the app, customers can book a seat in one of the company’s shuttle vans for around $4 a trip. Ford plans to expand the service to 5 additional cities over the next 18 months [9].

The company also invested in Motivate, the largest operator of bike-share programs in the US.  Ford will add 7,000 new “Ford GoBikes” to San Francisco’s bike-share infrastructure which will be available to users of the Ford Pass app. 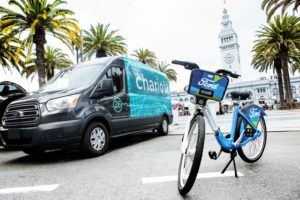 In order to allow these projects to thrive, Ford is pursuing its next-generation initiatives under a wholly-owned subsidiary, Ford Smart Mobility LLC, which is based in Silicon Valley (2.5k miles from Ford’s HQ in Dearborn).  The aim of this is to prevent these radical new projects from being “overwhelmed by the Ford bureaucracy” and “give them the flexibility and the operating structure to be able to be competitive with other technology and mobility services companies that move really fast.” [11] Locating in the Valley gives Ford access to the talent and ecosystem of ideas it will require to compete with the likes of Apple, Google, Uber et al.

Ford is educating consumers on the repositioning of its brand through the “Unlearn Ford” campaign.  It will be interesting to see if, through this campaign and the exciting work that is doing, whether one of the oldest names in the automotive business is able to convince both customers and collaborators that it holds the aces in the most high-stakes game of poker the industry has ever seen.

Will one of the titans of physical transport be able to effectively re-position itself against young upstarts in the battle for digital dominance of the mobility industry?

Student comments on Ford is no longer ‘just an auto company’